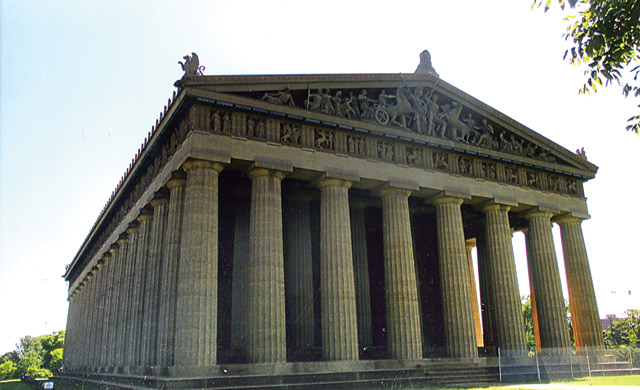 Appropriate for the Athens of the South, this replica of the Parthenon was built for the 1897 Exposition in Nashville.

I’m not one to point to Queen Victoria as a monarch of good taste. The queen was known for denouncing pleasurable entertainments in the name of morality, yet—after hearing a performance of the visiting Fisk Jubilee Singers from Nashville—she broke stride to praise their hometown, calling it a “music city.”

The nickname has become town’s tagline. This magnet for country music boasts one hundred new residents. Per. Day. Songwriters, singers and strummers pour in, along with everyone else, from their accountants to the bold-name chefs that fuel the high life. And everyone yearns to catch a show—think Grand Ole Opry—at the Ryman Auditorium, a.k.a. the Cathedral of Country. You should, too.

To come prepared, I got a little history under my belt at the Musicians Hall of Fame and Music. “Head nerd” Jay McDowell, a recovering musician himself, explained that its story encompasses all genres, from blues and R&R to bluegrass, pop and country. It traces the evolution of music on demand from “furniture—radios and phonographs—to today’s device in your pocket.”

Paul McCartney recorded in Nashville, as did Jimi Hendrix, who famously declared, “Here, everybody knows how to play together. Walk down the street and people are sitting on their porches playing: That’s where I learned.” So, needless to say, did performers from Roy Orbison to Johnny Cash… and the list goes on. 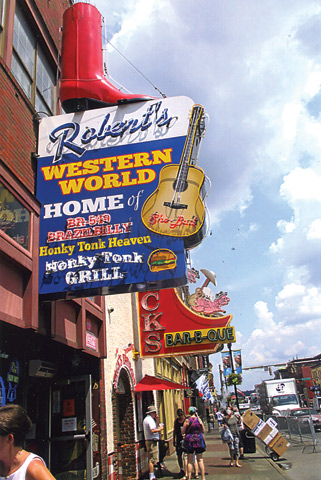 We gawk at the museum’s salvaged Enactron Mobile Recording Studio—“a dirty, old trailer,” says Jay, made of lead that magnificently blocked interference. Look for the scrawled autographs on the walls. Then we pop on headsets and pick up instruments (drums for moi) to “perform” onstage.

Proceed to the Country Music Hall of Fame & Museum to trace this music’s roots: Appalachian fiddle and banjo; European accordion; African drums. By the 1920s, radios brought it nationwide. In the’70s, the Nashville sound added strings and backup vocals to the mix.

The tour continues at the fabled Studio B, where Dolly Parton cut over twenty records and Elvis sat at the very piano bench you’re invited to occupy. Later, follow the neon igniting Broadway, a.k.a. Honkytonk Row, crammed with saloons that offer live music (no cover charge) by the stars of tomorrow.

History shines at the brand-new building of the Tennessee State Museum, unspooling the region’s story through  a Time Travel Tunnel starting eons before explorer DeSoto looted his way through; long before Andrew Jackson vaulted from here to the White House. The exhibit doesn’t pull punches when discussing the KKK. The Depression that forced Blacks from jobs that white guys needed. The Manhattan Project of World War II. The trail of MLK and the Nashville sit-ins. 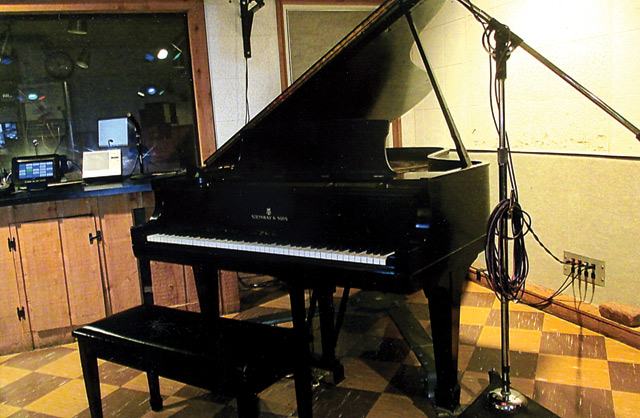 Resting in Studio B is the piano where Elvis Presley himself sat while recording his hits.

The Parthenon is a symbol of happier times, built for the city’s 1897 Exposition. Yes, that Parthenon: It’s an exact copy, fitting for the city called “the Athens of the South.” Inside, gold-plated Goddess Athena stands 42 feet tall and a gallery celebrates American painting from 1850-1925.

More (and better) art abides in the Frist Art Museum, an Art Deco belle of 1930 that originally served as a post office. The show of Frieda and Diego reveals the It couple of Mexico in photos of intimate moments, along with their works.

Punching above its weight is downtown’s Woolworth—yup, the dime store whose lunch counter was the site of sit-ins and their brutal reprisals in the Sixties, detailed in photos and a menu insert. Today that lunch counter (and tables) serve up tasty fried green tomatoes paired with goat cheese; pimento cheese allied with crispy pork rinds; fried chicken, Nashville-hot; and dime-store burgers.

What led to those sit-ins? For insight on slave owners and their enslaved “property” that ran Tennessee’s antebellum mansions, head out of town—first, northwest to Hendersonville to tour Rock Castle, built by slave labor in 1783 on 18 acres given to surveyor Daniel Smith for his service in the Revolutionary War. Admire the original furnishings, including a locked sugar chest, a sign of wealth, and stylish linoleum “carpets.” 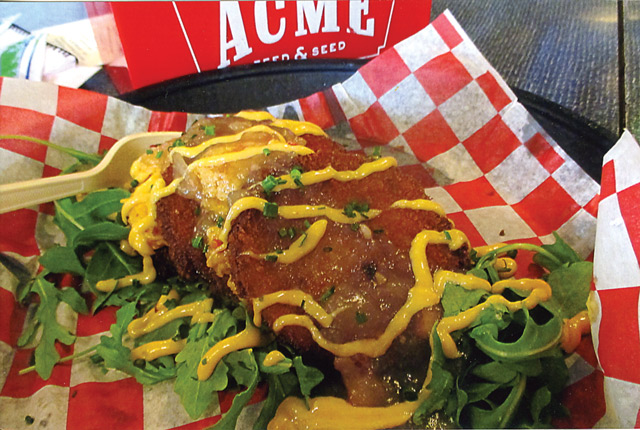 In Murfreesboro, to the Southeast, tour Stone River National Battlefield, where Park Ranger John McKay explains that Tennessee was second only to Virginia in number of Civil War battles. And this one proved even deadlier than that notorious Shiloh massacre. (Tennessee was a divided state, and the last one to secede.) President Lincoln, John explains, desperately needed a victory here to head into his re-election campaign. The bloody battle began at dawn—“the sky black, freezing rain and a cold river to cross.” Every church became a field hospital—private homes, too. Troops that didn’t make it fill the adjacent cemetery.

Continue to Cannonburgh—Murfreesboro’s original name—a recreated village including schoolhouse, church, general store and working blacksmith’s shop—and from there to Sellars Farm Archaeological Area, a Native American village of a hundred house sites in 1300 A.D. and then mysteriously disappearing three hundred years later. Today their outlines and mounds offer hints of the distant past.

Nearby stands another recreated village, Fiddlers Grove, composed of 50 historic buildings and a wild and crazy crew of re-enactors trying to sell you snake-oil medicine and engage you in a gunfight.

Best for last? Could be. Steer south to Franklin for a don’t-miss tour of two of its plantation homes caught in the nefarious Battle of Franklin. Carnton, built in 1826, claimed 44 slaves on this 400-acre farm. Eric Jacobson, of Franklin Trust, introduces the mansion with an unvarnished message on the horrors slavery wrought, but also encourages us to understand that these owners were “a product of their times, and their entire way of life was being destroyed.”

The beautifully-wallpapered bedrooms were used as the army’s impromptu surgery. Bloodstains still blot their floors. The family brought food, water, and bandages torn from petticoats to the wounded as bullets whizzed too close for comfort.

The nearby Carter House of 1830 is more modest—built on 300 cotton-growing acres worked by 22 slaves. Once the Union Army charged, the slaves took off, says our guide, pointing at bullet holes that pierced the walls as the family huddled in the basement. Six Confederate generals were among the 10,000 casualties that day.

Y’all come see for yourself! To plan your visit, check out www.visitmusiccity.com and www.tnvacation.com.