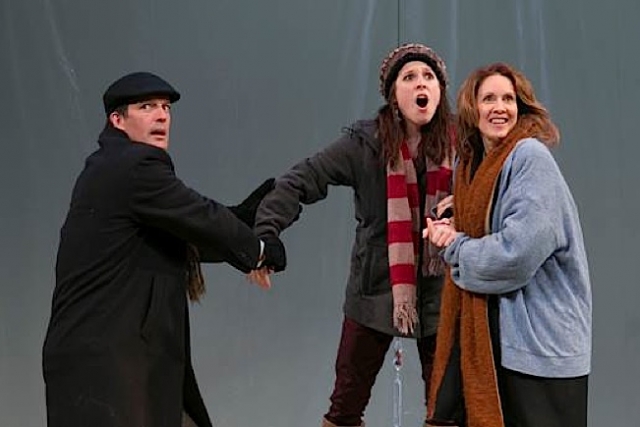 Lake Untersee by playwright Joe Waechter is a striking portrait of narcissistic parents who lack enough humanity to grapple with their teenaged son’s emotional difficulties. 15 year old Rocky (Michael Thurston) is so traumatized that his primary form of communication is grunting. He also has a delusion -or is it a vision?- that his soulmate, identified as male, is trapped beneath ice in Antarctica.

Director Jeremy Cohen has staged a captivating production for the Workhaus Collective at Illusion Theater. Jennifer Blagen and Michael Booth give unsettling performances as they reveal parents Phyllis and Jason’s self-centeredness. What adds to this is that such a negative quality has become socially acceptable in our Culture of Narcissism.

It’s often considered in bad taste to criticize the way in which kids are shuttled around between divorced parents, but Waechter, whether he intends to or not, does that. And frankly, in context of his play, he makes a good point. Such shuttling is all the more reason that parents must be attentive to their children’s needs. Not having one solid single space can be unanchoring and discombobulating. So when parents resort to unmindful reactions to issues rather than thoughtful attempts at solutions, all hell can break loose.  (And no, I’m not saying divorce is necessarily wrong.)

In light of Vikings star, Adrian Peterson, putting leaves in his four year old son’s mouth during a brutal whipping, the scene where Jason stuffs medication into his unwilling son’s mouth bears timely comparison. Both the athlete and the character are stuck willfully in old thought paradigms.

Another up-to-the-minute segment is when the perpetually irate Phyllis attempts to “snap” into a yogic visualization segment. This sly scene exposes that even idealized non-western spiritual approaches can be applied without the mindfulness required to enter into them. 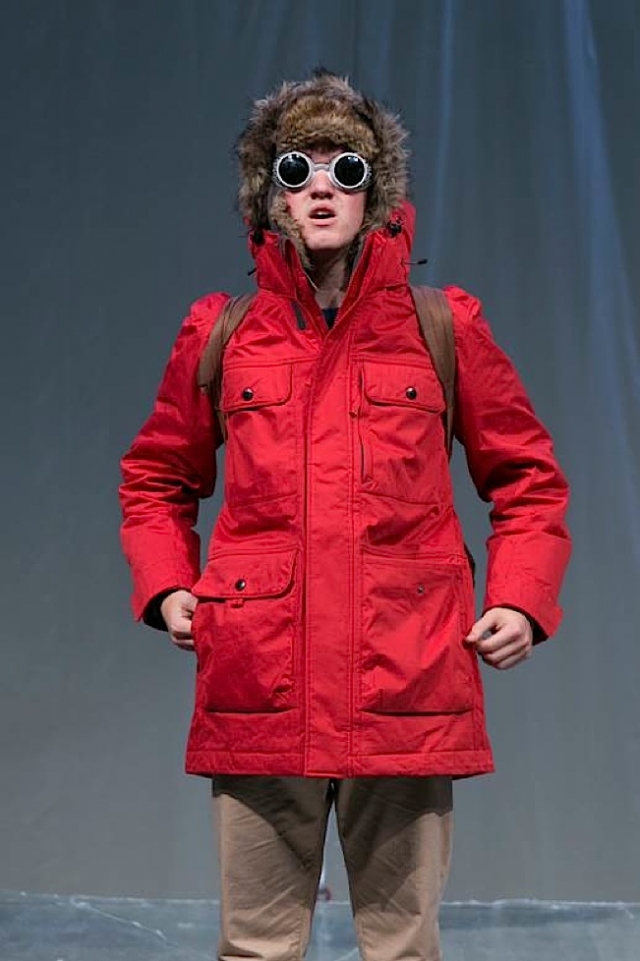 Thurston is endearing and feral as Rocky. His moments from shifting from primal intensity to sensitivity are quite touching. Adelin Phelps charms as Gale, Jason’s empathetic live in girlfriend who reminds us that grownups don’t have to be emotionally frigid and unrelentingly linear in their thinking. Geoffrey M. Curley’s wonderful scenic design is centered by a large panel comprised of plastic shards majestically looming over the action like a multi-cracked ice sheet. C. Andrew Meyer’s sound design is beautifully ethereal.

Waechter is onto something or things. He sees something dreadful in the middle aged generation, a generation I’m a part of, and the soul-numbing patterns so many of us have mindlessly adapted. I also found myself remembering how in 1979, Woody Allen with his film, Interiors, and in 1980, Robert Redford with his film, Ordinary People, warned about toxic married households that suffocate their offspring because of controlling moms and detached fathers. Geraldine Page and E. G. Marshall in the former, and Mary Tyler Moore and Donald Sutherland in the latter, had my generation cheering on the filmmakers because so many of us recognized our own parents and or grandparents in them, or if our parents weren’t that bad, we saw in those brilliant performances, parents of someone we knew well.

Though Waechter’s play is not at the level of those two film masterpieces, he definitely has a gifted insight about the toxic parent problem, and especially in the context of divorce, and he writes well. And he’s young. Allen and Redford were at their mid-career stride so I’m not expecting his Interiors……yet.  I look forward to future work by Waechter.

JT: I was struck by Rocky being drawn to a kind of metaphysical man who was trapped in the ice. I didn’t necessarily see this as unrequited gay love but I did find it touching.

JW: Exactly. I thought it was important to not be able to see the thing that Rocky loves so much, that it should be so real for him, and by following him, it becomes more real for us through things like sound and light. It’s more about a quest for love and for him to figure out how to define love than it is about the individual on the other side. Placing him underneath the lake, became a way of expressing what is happening for all the characters in the play – unable to hear, see, or make sense of that undefinable thing that lurks just beneath the surface.

Also, being gay has been for me has been at the center of my existence. It is not the singular definition of me, but just another adjective  – another thing that makes me the same as some people and different from others. I wanted to create something for Rocky that was real love, but not simply reduced to being gay. It doesn’t matter what the sexuality is; it only matters he loves him. For that reason and others, the word gay or any words related to it never actually occur in the play.

JT: You said the It Get’s Better campaign inspired some of your writing.

JW: The play was inspired by several things that were all swirling into my brain around the same time, including the It Gets Better Campaign. Dan Savage’s campaign brought up a lot of issues surrounding youth, identity, language and sexuality at the time. But I thought these issues were larger than the queer youth they targeted, and shared universally – feeling the outsider, getting stuck trying to connect with people but lacking the vocabulary to get un-stuck. At the same time, I was reading about the search for extremophiles (tiny micro-organisms) in Lake Untersee, a frozen lake in Antarctica. Scientists believe that if these tiny organisms could survive such extremely harsh climates, then life could be possible in a number places – for those organisms, but also maybe for us humans too.

I was also reading Copernicus’ On the Revolutions of the Heavenly Spheres, which proposes the Earth’s orbit around the sun. Copernicus opens it which this very moving dedication, a letter to Pope Paul III. In the letter, Copernicus asks for the Pope’s acceptance as protection from backlash against this really radical idea that defied many notions of physics, mathematics, and religion. Copernicus asks the Pope for his acceptance and then dedicates the book to him. I found that so moving, a dedication and plea to the one who defines your ‘other’-ness.

For me, all of these things – the lake, Copernicus, and the campaign – resonated with how young people struggle to articulate their way of being, and how we expect children to describe themselves, particularly in issues related to sexuality and ‘other’-ness, without ever equipping them with the language or vocabulary to do so. It’s as if we are all orbiting at the center of our own Universe, stuck in our own orbits and spinning out of control, but what happens when we recognize that maybe we all share the same orbit, or that sometimes we need to change our orbit? I wanted my play to tell the story of an ensemble of people spinning out of their orbit, stuck in their own worlds, until they can begin to hear what’s resonating underneath them. At the risk of being reductive or corny, I think there’s an Untersee for all of us, and I think there’s a sound each of us is trying to tune into and hear. The sound of love may be the loudest, and one that can truly bring us all together regardless of anything.