Mystical and Poetic, “The River” Mesmerizes 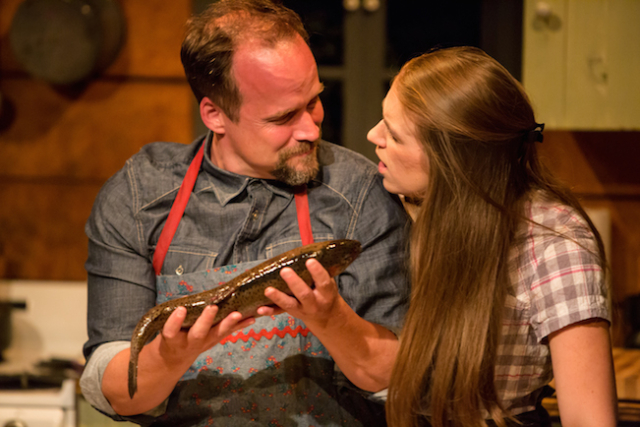 Walking Shadow Theatre Company has staged a mesmerizing production of Jez Butterworth’s much talked about 2012 drama, The River. If you see it at the Open Eye Figure Theatre Space, you may well find yourself talking a lot about it afterward. Just what may be going on within the play is something that draws different conclusions from different viewers. It feels like an episode of The Twilight Zone mixed with the sensibility of Emily Dickinson. Whatever your deductions, in this poetical prose play, Butterworth certainly apprehends how we can fixate on the things we have been attracted to in those we have fallen in love with and how swampy memory alters the recollection of that and perhaps even projects that memory onto others.

The protagonist, simply called The Man, sits in his cabin on cliffs above a river. He is visited by women he has known intimately, apparently, in the past, but seems to conflate his experiences with them. He seems to have adhered to the same behavioral pattern with all of them. Is he conducting a personal ritual with these women? Is he a seducer? Is he fantasizing? Director Amy Rummenie has us wondering throughout. Watching The River is like drifting into a dream with sublimely circular language and moments of action.

Andrew Erskine Wheeler bravely exposes The Man’s vulnerable nature and his organic need for women. That need may be the one absolutely certain thing in the play. Emily Grodzik and Elizabeth Efteland as The Woman and The Other Woman splendidly evoke vocal and physical movements that convey very different textures of what seem to be the same memory The Man is recalling. Clearly, Butterworth is musing numinously on the mystery of women. Ultimately, The River is a soulful meditation on how we fixate on how we think love is supposed to take shape in our lives.