Musician of the Moment: Billy Lloyd

In a world of Top 40 pop music, it can be refreshing to hear a new sound — even more so when that sound comes from a queer composer, producer, and musician.

Where does a sound like that come from? According to Lloyd, it comes from everything. “Because a lot of my music is about social or moral issues that I want to discuss or explore, my range of influence comes from as wide a range as films, books, conversations with friends, the news etc,” Lloyd says. “I rarely am inspired directly by any music.”

The issues Lloyd explores through music certainly run the gamut from protest to reflective, with identity being an overarching theme at the moment. “I’m really interested in how this period in our history will be defined, and what parts of our culture will be remembered and what won’t,” Lloyd shares. “I’m also very interested at the moment in how the internet and new technology has shaped our lives.”

In terms of identity, it is certainly easy to pigeonhole artists, especially queer artists, and confine them to a label. Lloyd’s release, Normal, undeniably shows a fluid take on gender and its expectations, so it must be a label readily taken on, right? “Personally, I don’t mind it. I think being an LGBTQ artist gives me a purpose for my music and helps other members of the LGBTQ community find my work and hopefully get something out of it,” Lloyd says. “It’s also given me a community to be a part of, which is something that I’ve never really had before (having grown up in an isolated village of 400 people). I think a lot of artists don’t want to let their sexuality define their work, but I find, at least at the moment, a lot of what I want to talk about are issues related to the LGBTQ community, so I’m happy with the label.” 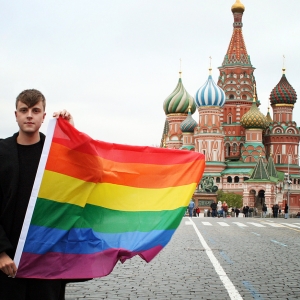 Billy Lloyd outside the Kremlin
Photo by Anastasia Soldatkina.

Billy Lloyd began a musical journey learning to play classical and minimalist piano at age 6, with composers such as Mendelssohn and Einaudi being instrumental in that musical upbringing. After that it was roughly ten years of experimenting with looping systems and largely instrumental writing before singing entered the picture.

Recently, he made his headline debut in Moscow, Russia and spent an afternoon outside the Kremlin holding the rainbow flag, à la Tilda Swinton.

“I wanted to do something that directly made a statement (beyond my performance itself) of support to the LGBTQ community in Russia and around the world in countries where they are persecuted for their sexuality or gender,” Lloyd says. “Also Tilda Swinton is probably the closest thing I have to an idol and it was too good an opportunity to miss making a homage to her.”

That statement is indicative of Lloyd’s overarching goal: the creation of a large scale platform that can be used to bring issues to light and campaign for social change and justice. This campaign isn’t just for the queer community, however.

“As a queer person, my natural/target audience has become people who identify on the LGBTQ spectrum, because I write about my experiences of the world through a queer lens,” Lloyd says. “But I don’t think my music can only be enjoyed by those people, and certainly I think a lot of people who do enjoy my music aren’t LGBTQ.” 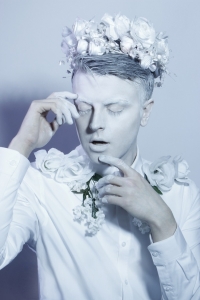 But Lloyd’s passion for social change and justice doesn’t mean the moment isn’t seized to jam out to those Top 40 hits. When karaoke night rolls around, Lloyd’s go-tos include “You Don’t Know You’re Beautiful” by One Direction and “Love on Top” by Beyoncé. Lloyd says, “Proud to say I can sing the entirety of ‘Love on Top’ (an octave below, but come on).”

Recently, Lloyd wrapped up a small US tour of New York, Chicago, and San Francisco, an experience that was made memorable because Lloyd most enjoys watching people’s faces during a performance. Who ( / ), Lloyd’s latest EP released in August, is available on iTunes.

Why wasn’t Minneapolis on the list? Lloyd says, “Sadly it wasn’t in the cards this time, but maybe I’ll be there next time!!”