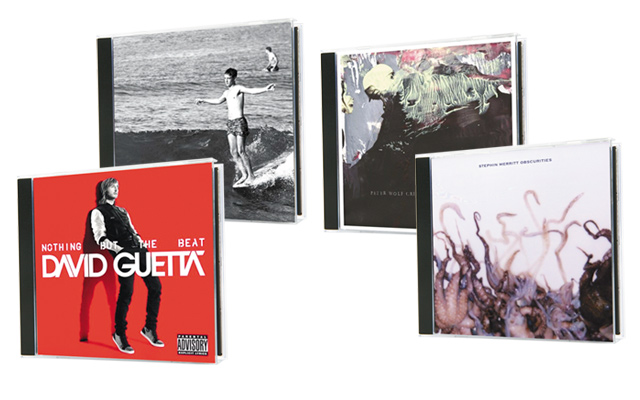 In the Grace of Your Love
The Rapture

The Rapture have been absent from the dance music scene for a relative geologic age – five years – but make a game try on their fourth album. It’s an odd collection that doesn’t quite bring a set of diffuse elements together. Give the band some credit for ambition as they dig into as many sounds as their tracks here, from pulsing dance music to sweeping ballads to a bit of slow-burn indie rock for the end.  The playing is solid from beginning (“Sail Away,” which wouldn’t sound out of place on a Waterboys album) until the end, led by Luke Jenner’s powerful vocals, but all of the genre hopping eventually left me exhausted. A little focus would have taken the album into a much better world.

The local duo grows on their sophomore release, without losing all of the simplicity that brought them national attention a couple of years back. The arrangements and instrumentation are more complex, providing more aural texture to hook and reel in the listener.  Peter Pisano and Brian Moen have the unconscious understanding of all great collaborators, crafting seamless compositions out of sometimes divergent pieces. Underneath it all – the synth-driven “Hard Heart” to relative sonic assault of “Beach” to the more Spartan “Cut a Hand” – the familiar tone is there. Peter Wolf Crier makes music fit for a Minnesota winter, and while that (hopefully) is still a ways off, that vibe – of spare landscapes, long dark nights and isolation beneath layers of warm clothes – is ever present.

Drawn from the wide reaches of his catalogue, from main group the Magnetic Fields to side groups like the Gothic Archies and the 6ths, Obscurities is just that – 14 oddball tracks from an oft oddball artist. To be honest, if you are not a fan, this is not the place to start. Merritt lets his eccentricities out on these tunes, be it a love for the cold dance music of early New Order or a 7-inch version of standout cut “I Don’t Believe You” that sounds like it has been rerecorded by the 1994 version of Pavement. Longtime fans, however, will find some delights, including the aforementioned tracks, not to mention the low-fi surf stomp of “Beach a Boop-Boop” or the crazed beauty of “Take Ecstasy With Me.”

David Guetta
Nothing But the Beat

The French DJ teams up with plenty of artists of the moment, from Jennifer Hudson to Usher to Lil’ Wayne on his fifth album, his first since the breakout success of One Love. It ends up being pretty much what you would expect – a breathless, driving collection of tunes that will likely play well in the clubs and isn’t entirely disposable as a set of tunes to listen to at your leisure. Pure dance albums rarely make for the best household listening – maybe best for cleaning the closets – but, as the title promises, the beat is up front throughout, no matter who sings. An instrumental bonus disc proves to be more interesting, with the spare tunes shining through without the interference from current pop stars.