Tila’s acting extends into her sexuality. Black hair, sparkling eyes, and a tight behind—of course, there are physical traits I find attractive, but then, this other thing called “personality” usually does it for me. 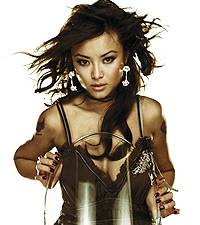 I know, strange, because I’m bisexual—the sexual orientation assumed as a cop-out for the openly promiscuous, greedy, and confused. Contrary to the stereotype, I actually do enjoy relationships, I believe in monogamy, and I don’t make out with women to get free drinks from men. The difference between the lesbian, the straight lady, and me is simply my honesty about attraction to human beings who meet my standards, regardless of gender.

Anyone can appreciate a hot body or a pretty face, regardless of what’s between those thighs. Sexual preference is simply that: preference. It’s normal to be attracted to other people, and bisexuals are bold in their recognition of the fact. As corny as it sounds, a person who plays both teams is simply open to love.

So, why do bi folks get such a bad rap? What’s negative about liking people for their sense of humor, their passion for cooking, or their compassionate nature, instead of their vagina or lack thereof?

Our society has some major issues with allowing people to think outside the sexuality box. We grow up thinking we have no choice but to choose between a multitude of binaries: right or wrong, black or white, straight or gay. But a gray area, and, therefore, some alternative options always are floating between the obvious constructions. It’s a matter of owning up to your true identity. Once again, you may prefer penis over pussy, or vice versa, but its OK to acknowledge where your interests lie, no matter how prominent those feelings are.

Bisexuality in general seems to be uncharted territory, as far as explanations go, and people both left and right are uncertain what a bi person is all about. Tell anyone you’re gay, and people may or may not have an issue, but tell them you’re bi, and passing judgment is assumed standard protocol.

“You’re just going through a phase…experimenting.”

“Bi is just your first step in coming out gay.”

Personally, I’ve heard all these accusations, and I’m sure other bi people have heard similar things in varying degrees. People just don’t seem to comprehend.

Therefore, when MTV created a “bisexual” dating show, I was more than excited to see how the media giant would handle the confusion.

A Shot at Love with Tila Tequila is the latest train-wreck of a reality show that people just can’t stop bitching about—and for good reason.

If you haven’t seen the show, think Road Rules, Real World, The Bachelor, The Bachelorette, and Fear Factor packed into one outrageous and disgusting swirl of booze and sex appeal. Drama consumes the contestants, who desperately strive for attention, while the scripted stereotypes are as obvious as Tila’s cue cards.

This spring, A Shot at Love is actually in its second season. The first ended with a male winner, “Bobby,” which was no surprise, because as stereotypes would argue, bisexual women always go back to the cock.

I have to admit sheepishly, I watched every episode of that damn program, mostly because of my curiosity about how millions of preteens, high schoolers, and college kids would be taught about bisexuality.

Like any show on the station, everything was incredibly overdone and fiercely dramatic. The boys onscreen had more muscle than brain, and the girls were left to deal with their prepubescent humor.

I do have to say I was quite pleased with the variety of lesbians picked for the cast—a healthy mix of fem, butch, and in-between.

So, what about the show makes me so upset?

When female bisexuality isn’t exploited enough already for male pleasure, Tila steps it up, and puts on quite the show, making the female contestants wear tiny bikinis, crop-tops, and anything that shows off their bodies, regardless of their personal objections. (As most could agree, watching a butch girl play games in a Victoria Secret’s nightie isn’t exactly hot). Once these ladies are glammed up, Tila jumps on, and makes out with them in front of the camera and other contestants, then quickly switches over to a new partner for another round.

As my girlfriend may argue, I’m looking a little too deeply into such a shallow television show. Though this may be true, I can’t help but think about how many people are taking Tila’s dirty/cheesy persona as the typical bisexual’s ways and means in dating and love.

I just hope people remember that Tila—another of America’s favorite attention whores—is first an actress, and then “a bisexual.”