Going to the Movies with Jeff & Drew: “The Divergent Series: Allegiant” 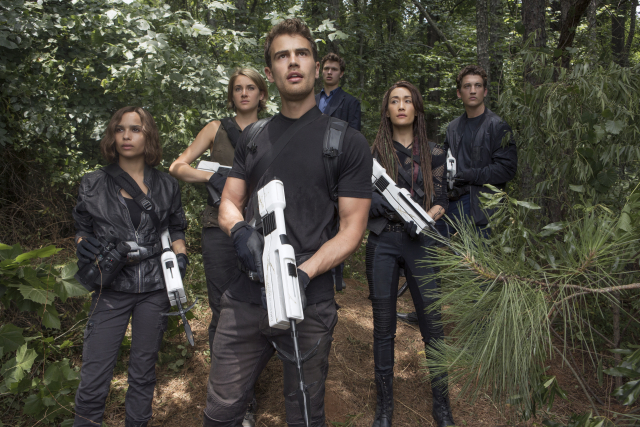 Escape a world you know to a world that is way too familiar.

For those that have not seen the first two movies in the series, the opening attempts to bring viewers up to speed, but the film still might be a bit confusing to watch. Character relationships have already been established, and events already set in motion may be lost on newcomers to Divergent. The story is unoriginal through its entirety. Our protagonist, Tris, hits every stop on the hero’s journey. The encounters, characters, and locations all have been seen before. It’s as if the filmmakers looked at all the best science fiction and fantasy films, cherry-picked their favorite parts and slapped them together. It feels very heavy-handed and formulaic, down to the characters having to explain what we are seeing in a very condescending way. The events were predictable from the get-go, down to the exact beat that they happen.

“The entirety of this film seems to be borrowed from other sources. Within the span of five minutes, I saw direct callbacks to Fallout, AEon Flux, Hunger Games, and Maze Runner. There were plenty more throughout the show.” – Jeff

“The stage for the movie also seems borrowed from Judge Dredd. The masses are gathered in Chicago (a la Dredd’s Mega City), which is surrounded by the post-apocalyptic wasteland called The Fringe (like Dredd’s Scorched Earth).” – Drew

Allegiant finds Tris, her love interest Four, brother Caleb, friend Christina and Peter (who will sell them out at any chance to increase his status, based on the previous films), venturing out past the great walls of Chicago. They walk through the toxic wasteland, The Fringe, and into a compound made of what looks like glass and white LEGOs. That’s where we are introduced to a new group, Bureau of Genetic Welfare, overseen by Jeff Daniels. 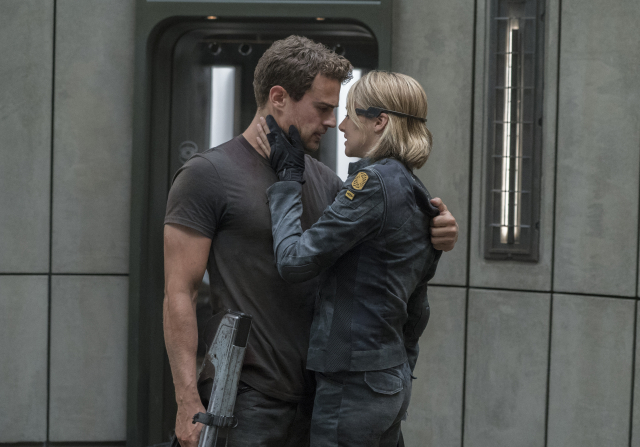 Allegiant follows a typical Hollywood formula for tween fantasy, and it works — that’s why it’s a formula. The acting is well done, nothing spectacular, but the actors put it all out there on the screen and give some great performances. As unoriginal as they seem, the characters are still believable as real people.

“The problem with being so formulaic is that there is no real sense of danger. The moments that are meant to be suspenseful fall flat. ‘Oh, they are being shot at while out in the open. Maybe something bad will happen. Nope, everything’s fine.’” – Jeff

“Throughout the movie, no one except Miles Teller seems to be amused by him playing Peter.” – Drew

There were lots of camera moves that help sell the action but in a way that didn’t become unnecessary. The shots were steady and mostly free of heavy handheld camera shake, which allows you to see the action in a way that is too often not the case in modern films. The visual effects were very well done. The director could have spent more time on the green screen work, as it was quite jarring and did not flow with the rest of the movie.

“There were a few choice off-screen ADR (Automatic Dialog Replacement) lines that were so completely misplaced and unnecessarily loud. ‘Hey, what’s that guy saying in the background? I care way more about that than what the main characters who were actually trying to move the plot forward are saying.’” – Jeff

“It does seem very heavy-handed because of how loud some of these throw-away lines are. I don’t see the need to hear seven times that the crowd wants the enemies from the last movie to die.” – Drew

With all its faults and bland unoriginality, the movie is still enjoyable for what it is. It caters to fans of the series and definitely goes after the younger audience.

“I don’t get this movie or this series.” – Drew