Going to the Movies with Jeff & Drew: “London Has Fallen” 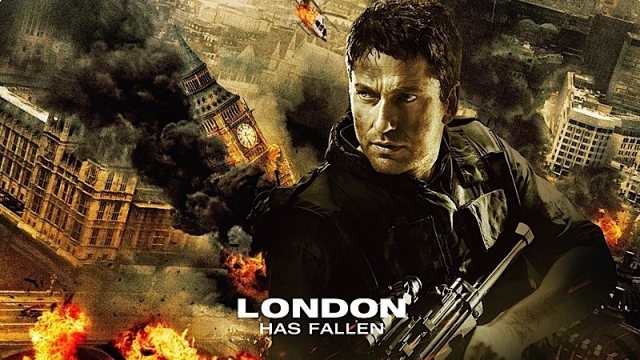 The President of the United States is in danger, again, and only one man has the fortitude to protect him…again.

London Has Fallen is a very enjoyable movie, especially for the action movie audience the film was crafted for. This movie has the same players continuing their roles from Olympus Has Fallen, where President Benjamin Asher (played by Arron Eckhart) and his lone protector Secret Service Agent Mike Banning (played by Gerard Butler) try to survive a massive terrorist attack, while Morgan Freeman, now promoted from Speaker of the House to the Vice President, coordinates rescue efforts. It follows all the expected steps of a sequel, in that everything is bigger; explosions, car chases, death count and, of course, some of the side characters from the last movie won’t make it this time. President Asher has to make a last-minute visit to London for the funeral of the British prime minister, where other world leaders are also in attendance. Soon after Asher arrives, a terrorist organization ambushes and tries to kill multiple world leaders and wreak havoc on the streets of London.

The action scenes are in line with a feature of this caliber, with Butler seemingly near-invincible against an onslaught of never-ending enemies. That being said, the visual effects leave something to be desired. The CGI helicopter action sequence early in the film is the graphical equivalent to something you would expect from a TV movie, not a studio big-budget feature. Fortunately, the bad visual effects are contained to a few scenes of the movie and don’t overwhelm the rest of the film. There are genuinely funny moments sprinkled throughout the movie that had the audience laughing, which served to break up the intensity of the action sequences.

The film doesn’t try to take itself too seriously and does a good job of keeping the plot simple, a trait that good action movies tend to have. Where it falls flat is it panders to those that enjoy action movies without much substance for anyone else. While there are some creative fights, most of the action scenes seem to be taken right out of a video game. Our hero moves forward, dispatching generic enemies with such ease that you’re left feeling that he is never in any real danger. Even the bad guys fit into the generic Arab Terrorist narrative that is so prevalent in our culture.

London Has Fallen was enjoyable to watch, but it does play to its built-in audience a bit too much. A good popcorn flick to enjoy when you don’t want to have to think too hard.