Going to the Movies with Jeff & Drew: “10 Cloverfield Lane” 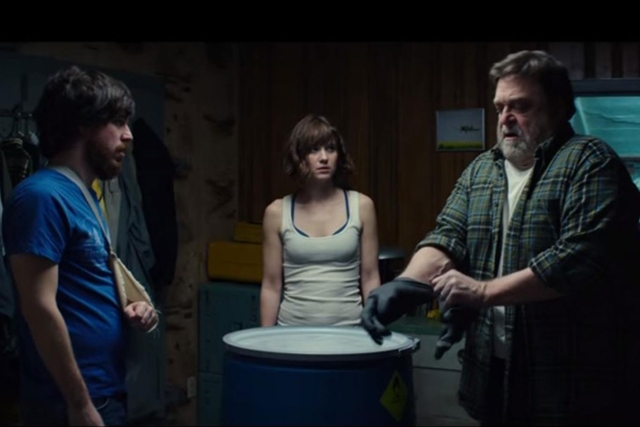 10 Cloverfield Lane is the movie everyone is going to be talking about — or as Drew likes to put it, see this movie before some jerk spoils it for you.

From the moment the movie starts until the final credits roll, strap in and hold on, it’s going to be a bumpy one. The film starts with Michelle (Mary Elizabeth Winstead) aggressively packing her belongings and leaving her apartment. As she drives away, her car is struck and rolls over. She comes to and finds herself on a dingy mattress with her leg chained to a cinderblock wall. Enter Howard (John Goodman).

The known captor, but proclaimed savior, of Michelle — he tells her she’s being kept in an underground fallout shelter of his design to keep her safe from an unknown outside threat.

The acting, above all else, captivates and draws you in. While Winstead and John Gallagher, Jr. (Emmett) deliver great performances, Goodman is by far the standout. His performance is nothing short of award-winning. He owns the character of Howard Stambler, a strange conspiracy theory nut who has so many layers that you don’t know how to feel about him from one minute to the next.

The film is visually stunning. The sets, lighting, props and characters all meld together to give a very trapped and claustrophobic feel to the movie.

Every frame is carefully crafted to serve the story and move it forward. Cinematographer Jeff Cutter did an amazing job with the visual cues in the film. With minimal dialogue, at times, each shot has something vital to the feel and emotion of the movie, which pulls the audience in all directions. No need for exposition dialogue, as everything is there on the screen to see. The film flows seamlessly from one tense moment that leads into a sense of security and calm, only to be gripped back to a feeling of anxiousness and dread.

Even with the claustrophobic feel, you want to stay with these characters until the end. Every action, every conversation, pushes the plot forward constantly.

An impressive feat considering there are just three characters on screen for about three quarters of the movie. The rest is just Michelle with very little dialogue, creating a mystery that leaves the audience to fill in the blanks. In fact, each character has just enough mystery to make the audience unsure of whom to trust or fully know what is going to happen.

10 Cloverfield Lane shines for first-time director Dan Trachtenberg. He has put together an amazing film, though it cannot go unsaid that the hand of JJ Abrams is very evident. JJ’s mystery box is heavily evident in this movie.