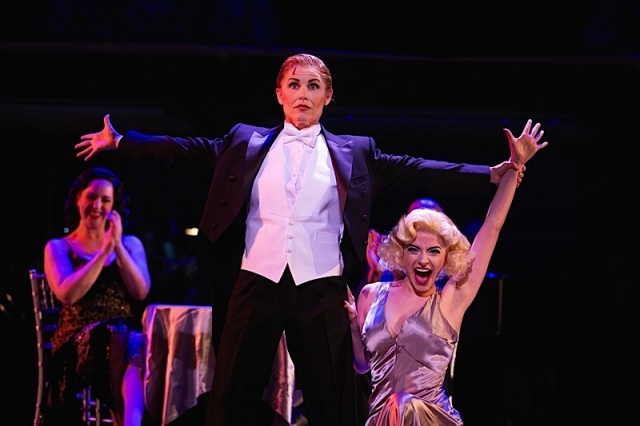 Ann Michels’s title role performance crosses the traditional gender divide as a female singer who dons a male persona off stage to give the impression that it’s really a man disguised as a woman on stage hitting those high notes. Victoria’s soprano voice is totally unacceptable, hence, discriminated against, at the gay Chez Lui club on Paris’s West Bank—because she’s a woman! However, if it’s thought that she’s a man with such uniquely high pitched chops, then she can land a headliner singing job and escape her dire financial bind. 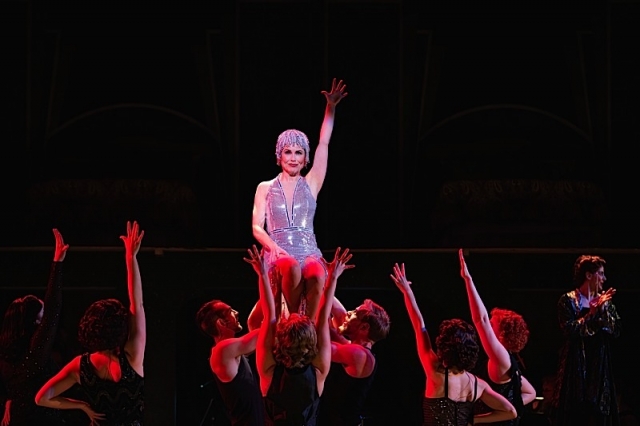 We often hear of the proverbial straight woman-gay man relationship which unfortunately has come to be enshrined in the toxically codependent relationship of Will and Grace, a pair that seem to have never been able to adapt to adult reality after college. Not to mention the brazen mutual narcissism of their buddies, Jack and Karen. At least the latter pair is funny and actors Sean Hayes and Megan Mullally are comic geniuses in executing their roles.

However, Victor/Victoria, which is a madcap laugh-almost-every-minute marathon of a musical, finds the humanity and real value possible in such a relationship. Victoria and a gay entertainer named “Toddy” become fast friends as he gives her a place to crash now that his jerk of a boyfriend has moved on. Michels and Rich Hamson understand and manifest this. As Victoria dares to perform offstage as the opposite gender in the early 1930s, Toddy gives her firm support. She can only safely be her biological identity in Toddy’s apartment. He is what in those days was fondly referred to as “a brick” of a person. 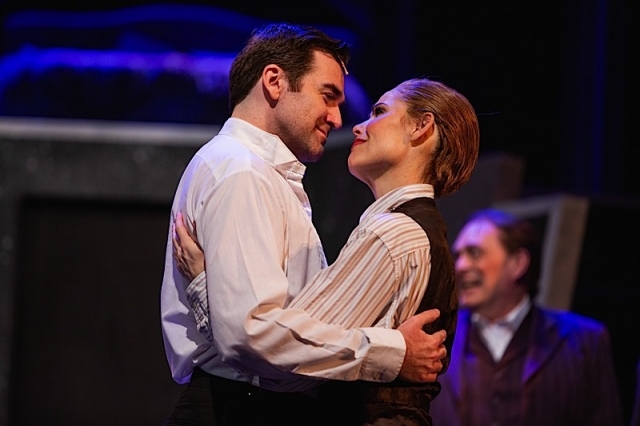 The wise and constant gay pal, consistently there to help as she grapples with the paradox of living in the shadows, he safeguards her crossgender identity under which she prospers financially. It’s a relationship that goes beyond the “shoulder to cry on” cliche. This is friendship with substance.

Toddy has a instinct for true love in the way a wise matchmaker might have. In this particular case it’s refreshing to see a gay male character conscientiously guiding a woman in coming to accept a rough-around-the-edges man he intuits is the right fit for her rather than playing the stereotypical fussy Aunt Pittypat gay “girlfriend” who fecklessly fills his gal pal with phobic nonsense about crude masculinity while unconsciously yearning for if not coveting it: that “it” being the masculine principle itself. Masculine men often have a mysterious emotional vocabulary all its own and those who naturally love them often need a little savvy guidance in how to come to terms with that masculine power. There’s potentially alot of love there, just aching to get out. 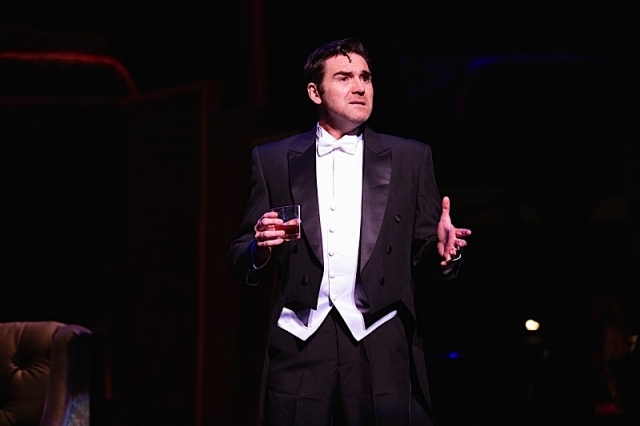 Toddy understands this. He has evolved well past the gay adolescent level of being thin-skinned about male machismo. Hence, he has insights to offer Victoria. Hamson’s Toddy shows how becoming a gay man of wisdom can assist in nurturing heterosexual love possibilities for a woman he deeply cares about, while simultaneously clarifying in his own psyche his own idea of what makes an ideal male mate in a same-sex relationship.

Throughout Victor/Victoria, Toddy is “training and developing” Victoria’s subversion. The rub for both of them is that a brusque but adorable Chicago businessman-gangster named King Marchan has fallen for Victoria while he interacts with her only when she happens to be presenting her Victor persona. His aggressively inquisitive personality threatens to unmask their deception and is a entertaining source of tension in the action.

Shad Olsen is simply superb as the well-heeled thug that King is drawn as by lyricist Leslie Bricusse (Doctor Doolittle – 1967 version) and book writer Blake Edwards (director of the classic Pink Panther films). Is Victoria really just woman posing as a female impersonator or is the macho King undergoing a shift in sexual orientation? As evidenced in the remarkable King’s Dilemma number, the actor wrestles with the biochemical reality of being irrepressibly and heretically attracted to what he thinks is male but what he senses is female. For example, these penetrating lyrics rendered with authentic vulnerability by Olsen in the style of Rex Harrison:

I am a guy who knows himself, so I really don’t give a damn!
I never could be in love with a man, but what if I am?
I mean, me? Gay? Ha!
If I know that I’m not, what’s the problem I’ve got?
And why do I feel this way?
The only logical answers is….that he’s a dame!

To thicken the plot, Toddy is abruptly magnetized by Squash Bernstein, King’s beefy bodyguard. This where the “what do gay men want?” question is perceptively addressed. It’s a question that recalls Sigmund Freud’s question “what do women want?”, which Margaret Mitchell thrashed out in response to in the politically incorrect cultural juggernaut, Gone With the Wind.  Edwards and Bricusse take her lead via Toddy in thrashing out what gay men want. 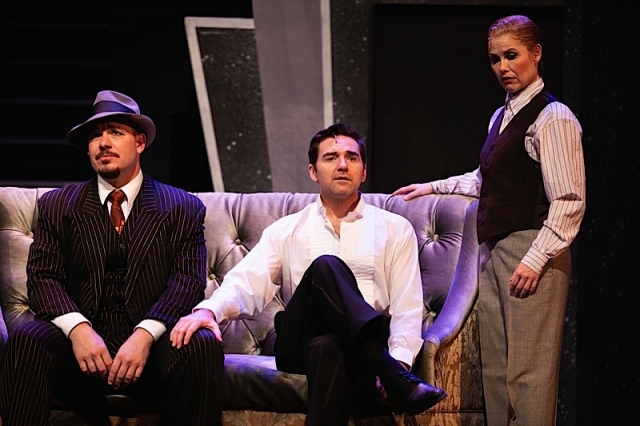 Eric Smedsrud is sheer perfection as Squash. He manifests a vibrant masculinity which actually runs counter to the current day’s politically correct code of masculinity engendered by “Will” actor Eric McCormack, and which has come to permeate “out” gay North American culture. (Of course, if one finds Will too tedious, one can emulate “Center of Attention” Jack.)

However, inherent in Squash are traits that gay men of earlier time periods who had to think independently without ready-made support systems, were inherently drawn to. There was no overarching and easily accessible gay publication or organization to tell you how to live and perceive yourself. You had to bravely figure that out through your own capacities the kind of man you were attracted to. This is what the closeted Squash comes out of. The gangster underworld is not conducive to open gayness. Squash is perhaps the Victor/Victoria character who traverses the greatest distance. He is a man who finally reaches the point of no longer rejecting either his inner masculine or inner feminine elements. Smedsrud embodies a Squash who has actually gone that route and as Toddy apprehends, he is something close to divine. 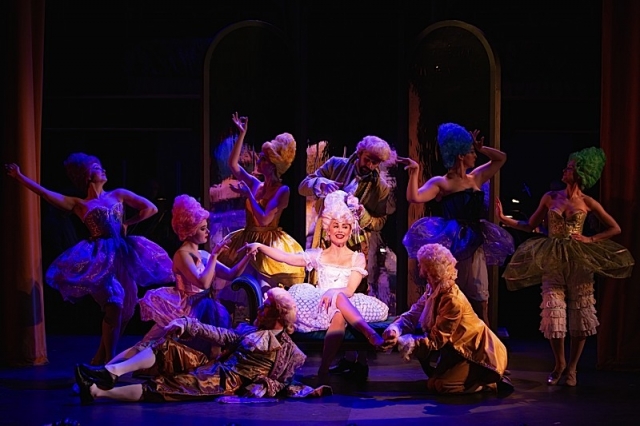 Ferrell’s choreography is sensuously reminiscent of that of Bob Fosse, with the entire ensemble reflecting that vividly. This was a time when night clubs in Paris and Berlin showcased men dressed as sultry and sexy showgirls, which the Artistry dancers evoke well. Paul Bigot’s wigs, many of which are big and colorful, infuse the festive club spirit wonderfully. Music Director Anita Ruth’s orchestra also embraces the naughty night club ambience of the time and place with a rich appreciation for composer Henry Mancini’s classic signature style. 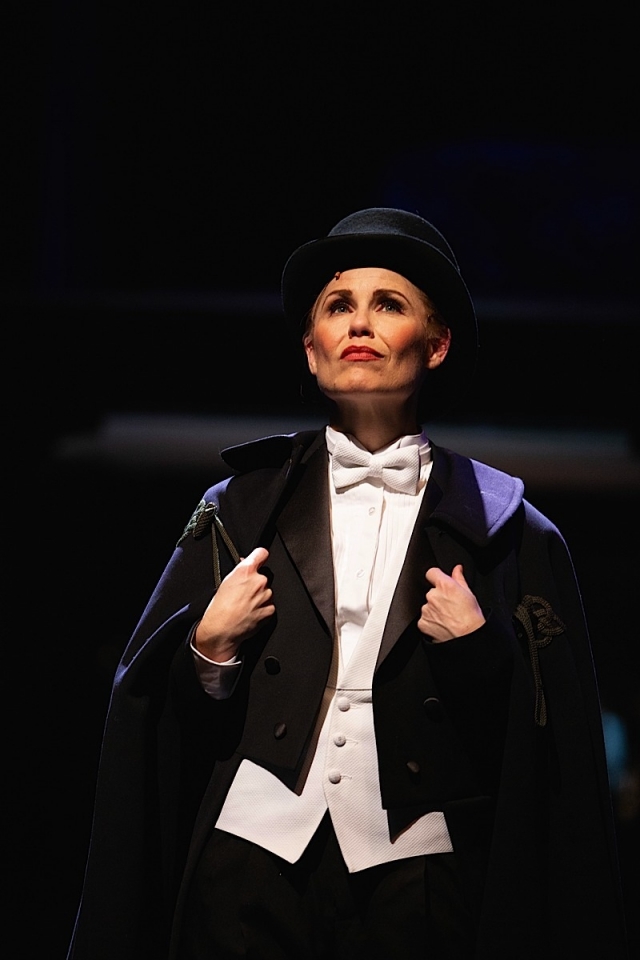 As usual, Michels’s vocals are fabulous. Not only in vocal range but in emotional and stylistic range. You may recall she also beguiled in a crossgender portrayal as Yitzhak in the Jungle Theater’s Hedwig and the Angry Inch 11 years ago. Brandon A. Jackson sparkles as the night club’s charismatic master of ceremonies. Emily Scinto is saucy as Norma, King’s girlfriend, insecure with the encroaching possibility that her studly trophy man of power may have a touch of lavender.

Jeff Brown’s masterly set facilitates the farcical timing in the especially madcap scenes quite effectively. Characters must hide behind doors and sofas and under beds so their interpersonal espionage won’t be found out by the others. Ferrell’s nimble actors are comic timing All-Stars.