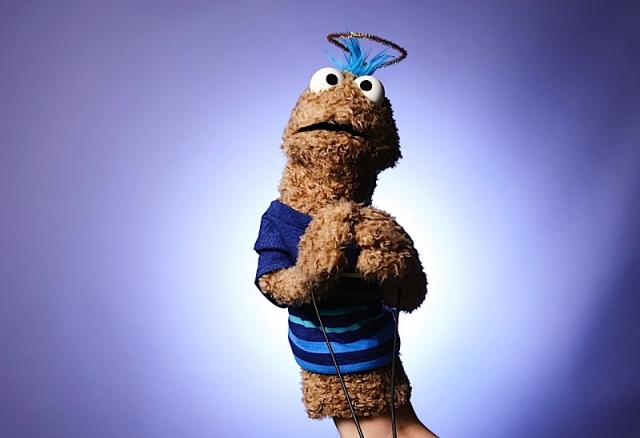 In the previous decade, Avenue Q bedazzled Broadway, winning the 2004 Best Musical Tony, with its clever puppets and live cartoon-like scenes. Complex sociopolitical issues were oversimplified, turning theater into a “safe space” for unloading strong statements without really examining them. However, in this decade, Hand to God was nominated for the 2015 Best Play Tony. And a decade later, this puppet-generated comedy takes an inductive leap. It proves you can have people rolling in the aisles while actually witnessing a young man wrestling with God. On the other hand (no pun intended), some will feel that he is wrestling with the horror of alienation which can happen when one concludes that there is no God.

The area premiere of the Robert Askins play, Hand to God, has been directed by Christina Baldwin with a penetrating apprehension of its tormented undercurrents at the Jungle Theater. It’s also one of the funniest shows of the year. Puppet designer Chelsea M. Warren has crafted charmingly goofy puppets that brightly contrast the dark roiling feelings beneath the surface.

Riley O’Toole gives a staggering performance as Jason, a Texas teen engulfed in grief over the death of his father. The boy vents his emotional devastation through a foul-mouthed puppet named Tyrone. The subconscious fuels Tyrone’s bitterly brutal rants and rages. But Jason himself is totally sympathetic and we empathize with the youth. He is too young to even begin to handle the grief over a dead parent. Within this young boy is an utterly biblical undercurrent. Like Job, he boldly questions God and whether God exists or not.

Hand to God is set in a church multi-purpose room where Jason’s mother, Margery, also still mourning, assists for a puppetry program. Her grief unhinges her so extremely that she sexualizes an encounter with one of the teen boys. To make matters worse, it’s the boy who happens to hold domineering animosity toward her own grieving son. Tracey Maloney’s portrayal of Margery is not only a brave exploration of the treacherous underside of the subconscious, it conveys the woman’s anguish to palpable effect. People are contradictory. Askins, Maloney, and O’Toole understand this.

The dynamic Eric Sharp is visceral in his portrayal of the molestation victim. Kris Nelson and C. Michael Menge also add richness to this breathtaking production’s other supporting roles. It’s Baldwin’s best directorial work yet. She understands Hand to God is not only a star turn for Jason (which it is, obviously), but a whole universe in and of itself.