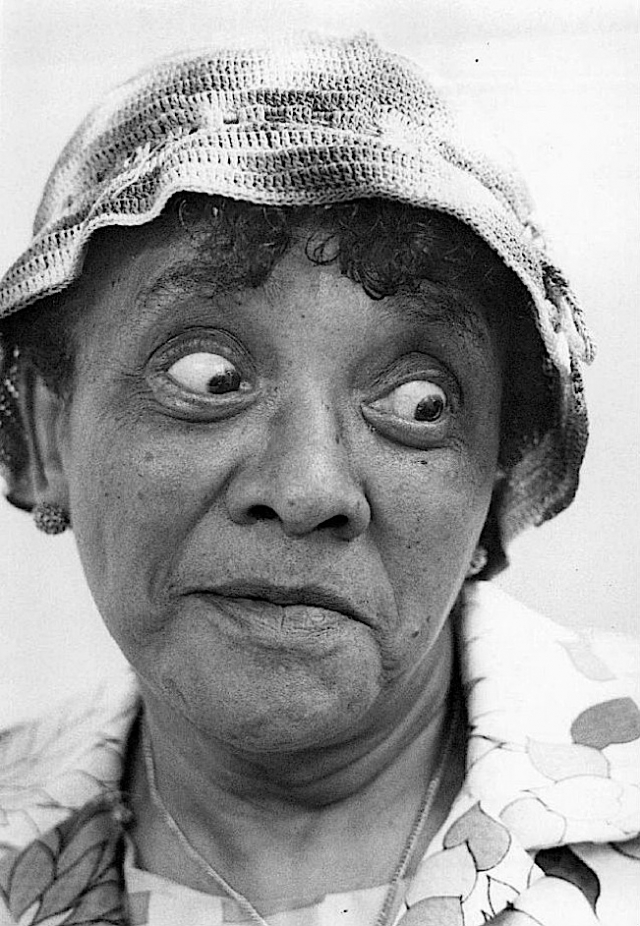 Jackie ‘Moms’ Mabley became famous for her persona as a frumpy, middle-aged woman in a housedress.

Through her early years of performing at famous African-American theaters along the so-called Chitlin’ circuit, including the Apollo Theater in Harlem, to appearances in the 1960s and early ’70s on television programs like the “Ed Sullivan Show,” she often boasted about her attraction to young virile men.

“The only thing that an old man can do for me is tell me where to find a young one,” she frequently told audiences.

But those who knew her off stage have said she quickly shed her matronly housedress and hat after her performances and changed into stylish slacks and shirts that were commonly worn by her fellow male performers.

“I met her at the Apollo Theater,” said Norma Miller, a dancer, choreographer, actor and fellow comedian who talked about Mabley in a 2013 HBO documentary film about the comedian directed by Whoopi Goldberg.

“And she and I shared a dressing room for two weeks — she and I and her girlfriend,” Miller said.

“She was real. I mean she was Moms on stage but when she walked off that stage she was Mr. Moms,” said Miller. “And there was no question about it.”

The documentary in which Miller, 86, spoke about Mabley includes numerous film clips of Mabley performing on the vaudeville stage. It also includes scenes of her signature standup comic routines, including some on the “Ed Sullivan Show” and the “Smothers Brothers Comedy Hour” on CBS in the 1960s.

In researching Mabley’s background, Goldberg unearthed private photos of Mabley in what appeared to be the 1930s or 1940s in which she dressed in men’s clothes with short hair, giving her an androgynous look.

“See, in that time period it was nobody’s business,” Goldberg said in the documentary, “Whoopi Goldberg Presents Moms Mabley: The Original Queen of Comedy.”

“And I will assume that when Moms came out of costume — because that’s what the hat and the shoes and the housedress was — and put on that silk shirt with those pants and that fedora and had those women on her arm — I think everybody was like, ‘OK,’” said Goldberg.

“And so I think that she was a woman among men and who was equal to those men,” Goldberg said. “And they treated her like a man. And I think that is what helped give her the longevity.”

Marc Powers, director of marketing for D.C.’s Howard Theatre, told the Washington Blade in a 2012 interview that Mabley socialized with a circle of lesbian and gay friends in Washington when she performed at the Howard in the 1940s. On one occasion during that period, following her show at the Howard, Mabley organized a “gay” party at a nearby nightclub that was raided by police, according to Powers.

“When that got shut down they were like, ‘Damn, where are we going to go? Might as well just go back to the Howard!’’ Powers said.

Arizona State University Professor Bambi Haggins analyzed Mabley’s career in her 2007 book “Laughing Mad: The Black Comic Persona in Post-Soul America.” Haggins, who appears in the Goldberg documentary and who spoke with the Blade for this article, points to what she calls Mabley’s contradictory persona on and off the stage and in her sexuality.

Haggins notes that, according to biographical information on Mabley, the entertainer clearly had romantic relationships with men. Following her death in 1975 at the age of 81, Jet magazine reported Mabley had three daughters and a son and left an estate worth more than half-million dollars.

Haggins and others who examined Mabley’s life and career note that reports of her relationships with men and women date back to the 1920s, indicating she may have been bisexual.

Much about Mabley’s private life remains a mystery, Goldberg stated in the HBO documentary.

What is known, according to entertainment industry observers, is that Moms Mabley was a cutting-edge, groundbreaking female stand-up comic and an accomplished overall entertainer both on stage and in film, television and in the more than 20 record albums she made of her comedy routines.

Her less-than subtle references to sex and her fiery demeanor set the stage for other female comics, such as Phyllis Diller and Joan Rivers, to follow in her footsteps, Goldberg and others have said.

“I think what’s fascinating about Moms is she was able to use what people thought she was from her appearance to say something about so many other issues — from the harrowing experiences that black people were having in the South to the civil-rights movement to the way she talked about LBJ and Lady Bird and JFK and Jackie,” Haggins said.

“Moms comes along in the late ’20s as a young woman dressed with that hat and the house coat and the big shoes and she takes that persona all the way to 1975,” Goldberg said in the documentary. “She honed that woman and she grew into that woman at a time when there were no women stand-ups — there were none. There was only Moms.”

Lou Chibbaro Jr. is senior news reporter for the Washington Blade. Reach him at [email protected].