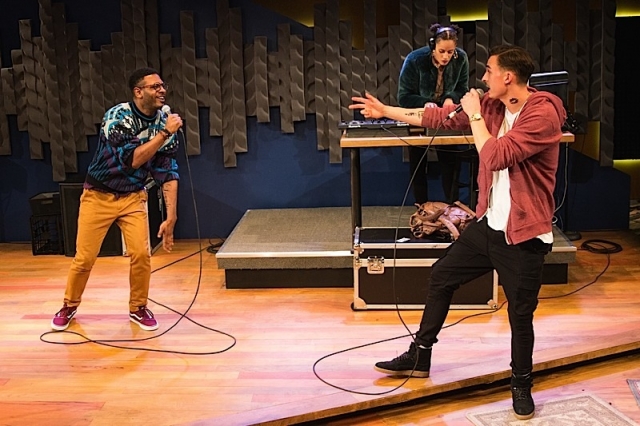 Idris Goodwin is a deep observer who probes beneath the surface to address questions outside conventional wisdom. A few years ago, The Jungle Theater staged his thought-provoking Bars and Measures, a play that wrestles with differences between Christian and Muslim influences in a black family.

At Mixed Blood Theatre, Boston’s Company One Theatre is performing a newer Goodwin piece, Hype Man, A Break Beat Play, for the Prescient Harbingers Trilogy of work by black male playwrights. These offerings muse on gun violence and black masculinity. Goodwin’s is among the best productions from outside the region to play in the Twin Cities this year.

Goodwin is a serious playwright who is roughly in the vein of the great masculinist dramatists of the previous generation. Like August Wilson and David Mamet, he refuses to give us easy answers to social problems, as well as easy justifications for debatable human behaviors. Those who’ve formed their theatrical view and cut their teeth on works like Avenue Q and The Book of Mormon will have to shift gears to apprehend Goodwin’s complex insight.

Hype Man, set in a recording studio, portrays the tensions between a white male rapper named Pinnacle (Michael Knowlton), his black male sideman named Verb (Kadahj Bennett), and their indispensable DJ, a mixed race woman named Peep One (Rachel Cognata). The trio is on the verge of a career breakthrough that’s been culminating for quite some time. However, when an innocent black youth driving en route to see his hospitalized grandmother is shot dead by local police, it serves as a catalyst for a kaleidoscope of passionately deep-seated reactions from all three. (The kaleidoscopic aspect is something that Brandon Jacobs-Jenkins’s Gloria, another fine trilogy offering, also embodies. Perhaps this points to a new dimension coming to fruition in contemporary playwriting.)

Those expecting a black playwright to have written a white villain with Pinnacle won’t be satisfied because though Goodwin clearly delineates the man’s flaws, he scrupulously makes distinctions between the character’s complex interracial life experience and impoverished roots. As with all three characters, he writes with unbiased empathy, yet with a critical eye.

Verb’s rage is certainly understandable but Goodwin has us ponder the problem of righteous anger thwarting one’s own well earned opportunity for career advancement, not to mention how it will thwart the advancement of the diligent collaborators one has co-invested with on various levels. That said, he understands that righteous anger can be justifiable.

Through Peep One, Goodwin dares to meaningfully question the reflexive way the politicization of skin color, on both the Left and Right, fails to reflect reality. Millions of Americans are either mixed in race and-or ethnicity; and-or know little of their actual genealogical roots. Peep One long ago came to realize this. She is not nearly as preoccupied with racial identity as the other two. Hype Man, again, is on the cutting edge, as it points to a shift away from the conventional collectively held attitude about skin color. In addition, Peep One challenges both men, who for all their focus on success and justice, are strikingly myopic in their view of women’s social roles.

Director Shawn Lacount’s superb actors delve into Goodwin’s rich language and unpredictable portrayal of human conflict with intelligence, dynamism, and lyrical beauty. They breathe visceral life into a script that may well take its place as a major play of the decade.

Where Hype Man defies polemics, another Prescient Harbingers selection glories in polemical verve in a crowd-pleasing way that recalls sitcoms like Married With Children and the Jack and Karen scenes from Will & Grace. 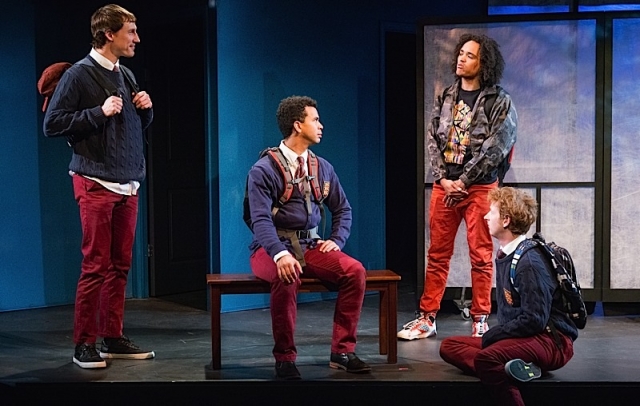 Moreover, in alignment with current theatrical currents, Hooded, or Being Black for Dummies, revels in the style and spirit of the Trey Parker phenomenon. Like Parker’s Broadway smash, The Book of Mormon, irreverent caricature is the name of the game. Playwright Tearrance Arvelle Chisholm seizes on the problem of two young black teens brought up in extremely different home and economic situations. He juxtaposes Tru (Nathan Barlow), a black youth living in poverty, in contrast to Marquis (William Thomas Hodgson), a black youth adopted by an affluent white family. In a police holding cell, the preppie Marquis is brazenly granted better treatment.

Tru, whose name is an obvious giveaway for how the audience is to think of him, is a devotee of Tupac, the iconic hip hop artist murdered in a 1996 drive by shooting in Las Vegas at age 25. Marquis, whom the audience is meant to see as artificial and “untrue” to his blackness, is quite interested in Friedrich Nietzsche, the controversial 19th century philosopher whose views have been embraced across the political spectrum. For Chisholm the inference is that Tupac is the more genuine thinker and a black person is less genuine for taking an interest in him. Although he doesn’t illuminate that judgment during course of the play. The names of the two icons simply serve as signifiers rather than substantive minds to be critiqued or explored.

Chisholm’s adults are feckless, clueless villains united against black youth culture, including a middle aged black cop (a swaggering Bruce A. Young). The idea is that he is insensitive to his own race. It’s in the spirit of such 1960s anti-adult cult film classics: e.g. Wild in the Streets with Christopher Jones and Richard Pryor. Bonni Allen personifies the helicopter New Age rich liberal white mom who smugly sees herself as a force of good. She would fit right into the bizarre milieu of the recent film gem about conspiratorial racism, Get Out.

Tom Reed is appropriately pathetic as a white teen who vainly wishes he was black (which is how Chisholm has written it). Sadly, he is compelled to face his inadequacy when unabashedly confronted by a wildly aroused white female student who abruptly projects her equine sex fantasies for black men onto him.

Director Thomas W. Jones II has ably guided the Hooded cast toward overstated madcap performances. Led by the lively Barlow and Hodgson, they reel in the laughs as they satirize the divergent worlds of polar opposites.