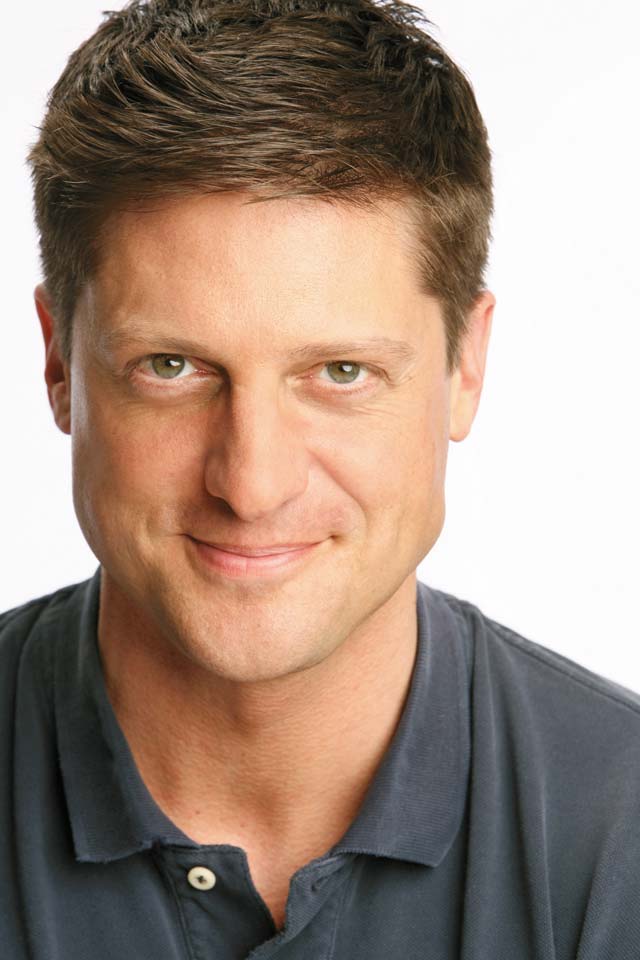 Hailing from the town of Wyoming, north of the Twin Cities in Chisago county, singer/actor Christopher Sieber is a Minnesota boy who became a bona fide Broadway Baby. After receiving Tony nominations for Spamalot and Shrek, he went on to play celebrated sex columnist, Dan Savage, in Savage’s own musical about bullying, The Kid. In 2010 it won the esteemed Outer Critics Drama Circle Award for Best New Musical.

This year Sieber stepped into the role of Georges, the “masculine” partner opposite Harvey Fierstein as Albin, the “feminine” partner, in the 2010 Tony-winner for Best Revival, La Cage Aux Folles. In its national tour which plays the State Theatre, this time around, Sieber plays Albin opposite George Hamilton, who made his mark as a ’60s Hollywood studmuffin.

Sieber has also appeared on the Logo network to discuss GLBT issues and has been active with Equity Fights AIDS and Broadway Cares. His partner is Kevin Burrows. I recently spoke with Sieber on a rich life in which his values are reflected both in his art and in his activism.

JT: How exciting that La Cage has had you work with Harvey Fierstein and George Hamilton. Tell me about that.

CS: Harvey and I have been friends for 20 years. We’d never actually acted together. We’d just done benefits and readings, but never actually worked (acted) together. We finally got the opportunity, doing La Cage and it was terrific. It was magical. You hope for an acting partner who is right on the same wavelength as you, so it’s not acually ‘work’. It’s joy to work with. I had that with Harvey. It was heaven! It was HEAVEN!

And with George Hamiliton, now I’m playing the opposite role, so it’s actually a challenge for me because I have to switch gears and literally do everything the opposite of what I was doing before in the same production. And George Hamilton is one of the most generous, self-deprecating, charming, wonderful guys. Not a diva bone in his body. So it’s really lovely working with him.

JT: Back here in Minnesota, how is your family about you and your partner?

CS: My partner Kevin and I and I have gone home and my nieces and nephews love him. Kevin is just part of the family.

JT: Will you have family members coming to see La Cage in Minneapolis?

CS: Oh Gosh yes! Actually my mom’s badgering me about that.

JT: I saw the very first national tour of La Cage, the musical. It was spectacular and powerful and really ran counter to the right wing vibes of the Reagan Era. Tell me about the national tour of the revival.

CS: Actually, this production is very intimate and very focused on the relationships between Georges and Albin and Jean Michel and the basic little family. It’s all about love when it comes down to it. And it’s about family – a different family, that’s all. This particular production comes from The (Menier) Chocolate Factory, which has less than 200 seats. They take shows and make them more intimate and La Cage was one of them.

And then they moved it to a larger theater in the West End (London’s version of Broadway), but they kept the same small aspect by building a different proscenium. And they kept the same thing on Broadway. The great thing with (director) Terry Johnson is he’s letting us discover our own way of these characters. Because when you replace or do a role that’ already been done, sometimes they take what the actor prior to your doing it did. He doesn’t work that way. That’s great. So we can just be ourselves and work our own way and find our own characters within the script.

JT: You’ve been a part of forums on Logo.

CS: I’m making myself visible. It’s the best thing I can do. To get out there and show what gay people are like. I always wanna be out there. For where I’m from, especially up north, they think gay people are a little scary. To be out and just be a person they realize, “Oh! That’s not so bad!”

JT: What are your thoughts on homophobia in Minnesota politics?

CS: We went to the (2011) Minnesota State Fair – my friends Frank Conway, Bobby McGuire, my partner, Kevin and my parents. And I had shirts made the said BARBARIAN across the front of them because of Marcus Bachmann’s comments about gays being like barbarians in need of discipline. I had them made like team jerseys. It was really fun walking across the Minnesota State Fair. The people who got it were like “I love that shirt!” The people who didn’t were like, is that like some sort of team?