The Minnesota Fringe Festival is packed with an abundance of stage presentations lasting no more than an hour at various local venues. As usual, many shows look into queerness, sexuality, gender, and identity. Fringe is a portal into present currents in performance and social attitudes. Plays, solo pieces, and dance and movement works are among the range of offerings. There are scores of works to choose from, so if you cast your net wide you are apt to find some very engaging and powerful experiences. Here are some offerings from local artists and artists from both coasts that Lavender folk may find especially interesting

One Man’s Journey Through the Middle Ages
Boston-based performance artist Judah Leblang takes a humorous look at middle-aged gay life from growing up in Cleveland in the 1960s and ’70s to exploring Provincetown during carnival week. Based on his memoir, Finding My Place, Leblang reflects on hearing loss after having been a teacher of deaf children and working as a sign language interpreter. He describes himself as gay, single, and hard of hearing. The show has sold out in Boston and Cambridge, Massachusetts and has gotten rave reviews from the mainstream press, the Jewish Advocate, and various GLBT publications around the nation.

The Clock That Fell Off The Mantle
Teenager Taylor Fischer is producing this new work with the Morally Ambiguous Theatre. Fischer says, “The show is a collaborative piece that is set in a different world where people are born with timers on their wrist that state the amount of time left in their life. It surrounds a group of people struggling to capture time and how time impacts a person’s life. It is also written, directed, and choreographed by people of the LGBT community and it features four LGBT actors. However, the content of the shows does not surround LGBT themes.” Artists include Melody Bowers, Iris Errickson, Holo Lue Choy, Emma Walker, and Nathaniel Davis.

Assemble
The newly formed Minneapolis Ballet Dancers (MBD) features eight choreographers, many with international roots, who create ballet and contemporary dance. Wesley Rocha, who hails from Brazil, will offer two works. Tokyo’s Shohei Iwahma and Venezuela’s Maylu Pena will present pieces; Pena’s Danzon deals with issues between two women. Dancer Kat Hesterberg relates, “Danzon reflects the love and jealousy and resentment of the female main character for her beloved partner (Hesterberg) who happens to be truly unaware of her own feelings. Filled with overwhelming mixed feelings, the beloved partner is seduced by a handsome man (Ben Olsen) who she ends up marrying. The female main character (Laura Janson) is pushed by the crowd to fight for her love.” Hesterberg and Annie Nimmo also choreograph pieces of their own.

Ball: A Musical Tribute To My Lost Testicle
Fringe and Illusion Theater hit-makers Max Wojtanowicz and Nicki Swoboda delighted us in recent years with their Fruit Fly musical, which gave us an endearing relationship between a gay male and a straight female. Wojtanowicz tells us of their newest project: “My director Nikki Soboda encouraged me to apply for this year’s festival with this story before I even started my nine weeks of chemotherapy. At first I had every hesitation you can dream up: It’s too soon, it’s too silly, no one wants to hear this story, it’s too exploitative, it’s insulting to the legions of people who cope with cancer every day. But now I’m so glad to be working on it because it’s helping me to process what was a very scary few months by finding the humor and the light in it. I think it’s a story for anyone who’s gone through an illness like this, or anyone who knows anyone who has. I hope the takeaway is that you can’t stop life from throwing crazy obstacles at you, but you can find creative ways to face those obstacles. For some people, that might be by going to therapy or cooking or painting or going on a long vacation. For me, it’s telling my story to an audience.”

Terror on the High Seas
Californian Les Kuykendall returns with another zany look at gay life. He continues the story of his relationship with Mike, the guy who forgot to tell his parents Les was black before he introduced him to them in 2006. It is 10 years later and Les and Mike are still together. Mike’s family is going on a cruise to Alaska and since Les is now a part of the family they expect him to join them. This means that Les is going to be stuck with his partner’s white conservative family on a boat in the middle of the Alaskan wilderness.

Kuykendall shares, “My straight friends have been telling me horror stories for years about their mother-in-law or father-in-law and before same-sex marriage was legal I would laugh and think to myself, ‘I am glad I never have to experience that.’ Well the joke was on me because now I do. This trip was definitely a learning experience for everyone involved. Even though his family said they accepted me as their son’s spouse on the surface, there were still some ideas about gays and lesbians that they needed to change and some lessons that they needed to learn.” 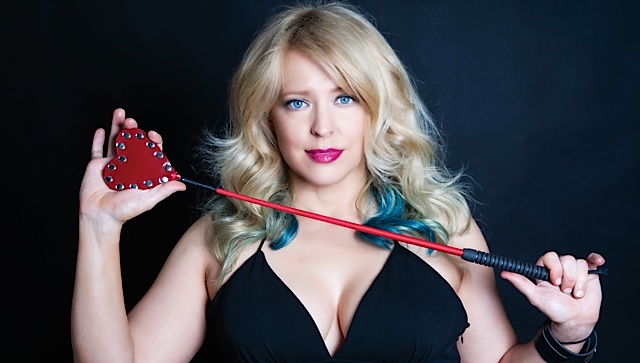 Becoming Inga
Colleen Kruse’s transformational solo piece plunges into the sensual world of healing and eroticism. When a woman’s world comes crashing in she takes an unusual job that puts her in touch with men who have significant issues with women and sexuality. All of the scenes are fascinating but the segment where Inga helps guide a cisgender man into the transgender core within his/her true self is deeply moving. It is one of the clearest illuminations of what it is like for a person to become aware of their trans identity that you may ever see. A courageous work that delves into the mystery of sexuality and gender with profound wisdom, but without the jargon.

Of Something Human
Choreographer Tamara Ober has wowed the Fringe before and her new work Of Something Human is as sure a Fringe bet as any. It also includes the talent of gay dancer Timmy Wagner. Ober says, “Gender and archetypes play a significant role in this work. I chose the dancers intentionally as their natural humanity and performance persona ride a great spectrum between diverse qualities: strength and gentleness, beauty and ferocity. I believe these diverse qualities/voices/perspectives as they intermingle in the world at large create grounds for the kinds of chaos and violence we are seeing expressed today. In this work, the dancers enact personal and world patterns as a microcosm/macrocosm of both historical and current violent events. They eventually find a way to string together these dynamics and elevate beyond the traditionally traumatized roles of gender and identity. They generate a tough-love playfulness while holding the integrity of their own voices and dynamics, and they come to find challenging, but genuine, human intimacy.”