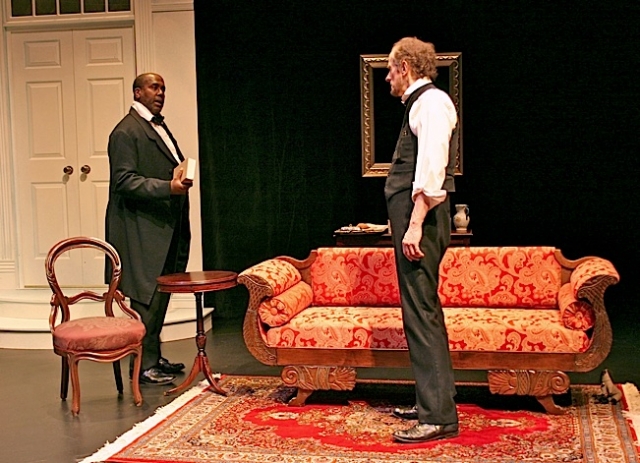 Harriet Beecher Stowe’s Uncle Tom’s Cabin ranked alongside the Bible as one of the two books that galvanized the abolitionist movement to end American slavery. In Carlyle Brown’s new play, Abe Lincoln and Uncle Tom at the White House, Stowe’s fictional title character drops in on the President in Twilight Zone style to urge him on to sign the Emancipation Proclamation.

Brown, also the director, captures the atmosphere of 1860s Washington with splendid period historical aid from costume designer Claire Brauch and set designer Joseph Stanley.  Steve Hendrickson as Lincoln and James A. Williams give performances that tug at the conscience. Jodi Kellogg elicits the anguish of Mary Todd Lincoln, a woman whose personal losses caused by the war have led her to the brink of madness. India Gurley as the First Lady’s right-hand woman and former slave, Elizabeth Keckley, is deft and gracious. The play runs only 75 minutes and moves slowly. It works vividly as a staged meditation rather than a conventionally plotted play.