Back in the day, I was given a cookbook by connoisseur of all things yummy, James Beard. I traded it in for one by Betty Crocker. What did I know? Times have changed, and so has my palate. So, when invited to join a dining blitz at venues of nominees and winners of the coveted James Beard Award, I hopped a plane for a metropolis of fine dining.

No, no, not Manhattan, where the price of valet parking could buy an entire dinner in the city I’m talking about: Milwaukee. Pack your stretchiest XXLs and come along as we hit the bold names of today and tomorrow. 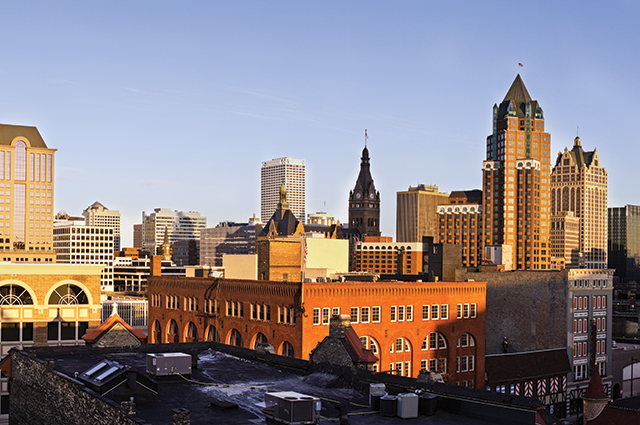 Start the weekend with brunch at Café Calatrava, anchoring the city’s art museum, whose iconic silhouette of white “bird wings” glides open every morning (photo op!). Its glass facade frames the brawny waves of Lake Michigan, while Beard-nominated Chef Jason Gorman wets our whistles with blood orange mimosas to accompany a life-altering buffalo mozzarella panna cotta gilded with nectarines, cured tomato, and a splash of balsamic. Mini-pancakes of red kuri squash pureed with ricotta become sublime when gilded with orange and chestnut honey. Honey piques Jason’s white truffle scrambled eggs, too. Then, just when we think we’ve surpassed nirvana, along come lobsterwurst Benedicts to confirm our view. Jason’s genius twist: a base of rösti potatoes and a fillip of watermelon radish.

For lunch, it’s off to DanDan, fueling the trendsters of the Third Ward with a modern spin on Chinese American food by two friends, Dan and Dan, who grew up with childhood memories of dining in Chinese cafés and, says Dan, “what made me happy will make you happy.” No lie. Elaborating on Milwaukee’s culinary scene, Dan Van Rite (semi-finalist for his former work at Hinterland) and bud Dan Jacobs agree: “We all generally get along: less competition; more good, honest food. Lots of chefs moved in during 2013, Milwaukee’s Golden Age.” 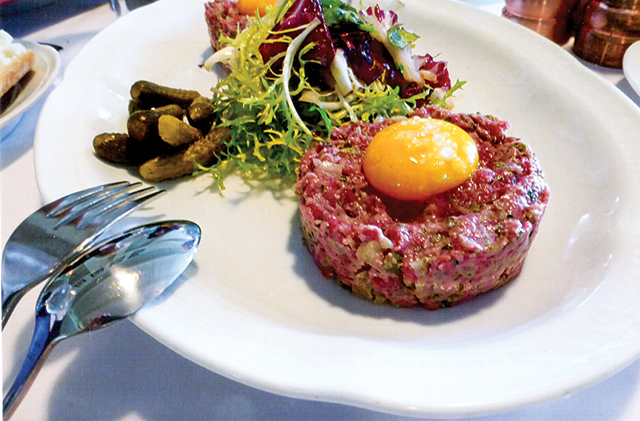 The first Milwaukee chef to garner a Beard award was Sanford’s Sandy D’Amato back in 1996. Passing the torch to chef/patron Justin Aprahamian was no mistake. He was voted best chef in the Midwest in 2014. I’ve eaten here over the years and can testify that it remains the gold standard of fine dining, enjoyed in a warm atmosphere as refined as the food.

Jason’s seven-course tasting menu brought our taste buds to attention with highlights like sake-glazed black cod paired with soba noodles and ginger-pickled carrots; rabbit and foie gras agnolotti noodles tossed with turnips and walnuts in rabbit-clam broth (What did I tell you?); grilled quail, peaches and kale (think BBQ as it’s eaten in heaven); elk tenderloin and sausage with creamed corn and zucchini (how Midwest is that?); and chilled cantaloupe soup floating a scoop of vanilla-buttermilk sorbet.

So, where to head after dinner divine? Why, Bryant’s Cocktail Lounge, Milwaukee’s oldest (1938) and semifinalist for Outstanding Bar Program 2013. Belly up to the aquarium above the bar or choose a quiet table while your server counsels you about a cocktail (over 450 in the repertoire but no printed list). When I hinted for “something like an Old Fashioned,” the Lonesome Highway came my way. Yearn for an ice cream-cooled Pink Squirrel? (Your grandma would.) Here’s the place. 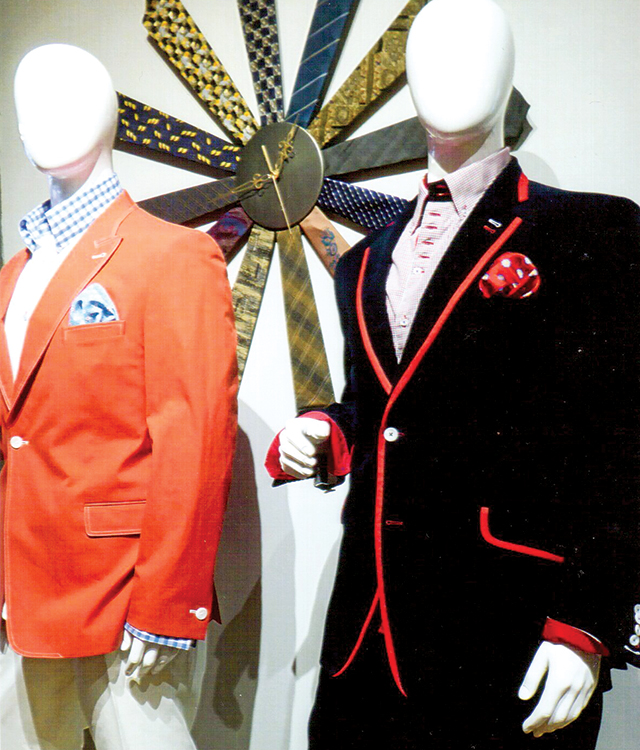 Breakfast the next morning was at our home base, the Third Ward’s new Kimpton Journeyman Hotel, where I summoned avocado toast while scanning the dinner menu: Wisconsin artisanal cheese; smoked Spanish mackerel; pork belly pizza (yes!); and chicken with Middle Eastern accents like golden raisin and saffron couscous, apricots, and olives. A future winner?

To walk it off, check out the Ward’s indie boutiques like Shoo, NL bespoke suits, and Retique resale clothes, (where I scored Vera Wang leggings for $9). Nearby, the Public Market building holds local wonders like Anodyne Coffee, St. Paul Fish Co. (lobster dinners $15.95), and Kehr’s Candies, with photos of employees Dorothy, Wilma, and Mildred. Head to the Marshall Building for six floors of galleries and a Third Friday crawl.

Lunch today was DIY. Well, sorta: a cooking class at Braise, where chef/owner Dave Swanson, a Beard Best Chef: Midwest winner, led us through the secrets of rolling pasta and gnocchi, which we then devoured. Or stop in for Dave’s farm-to-table fare like grilled Hen of the Woods mushrooms with Parmesan custard, black ramp ragout and jam; cabbage-wrapped salmon mousseline with marjoram creamed corn and chili pork fat vinaigrette; or steamed pork buns. 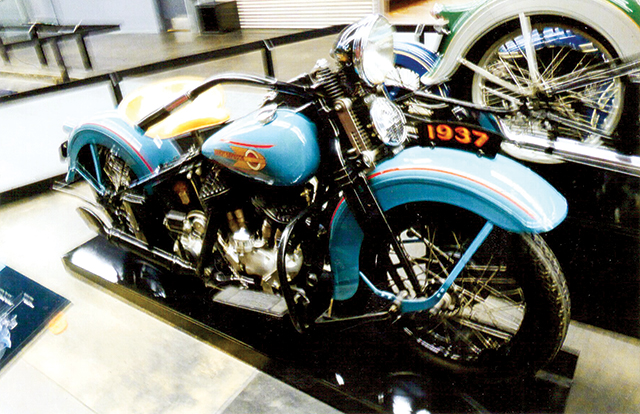 Harley fans, don’t seek the Holy Grail on an empty stomach. Breakfast first at the Potawatomi Hotel & Casino’s Canal Street Café (and maybe win the down payment on a hog at the slots). My omelet (spinach, mushrooms, Swiss) hit the spot. As did my neighbor’s huevos.

The museum itself, in Harley-Davidson’s hometown, explores the company’s and nation’s history since 1903, the first year some smart fella replaced his pony with a bike. The invention changed everything from police work to ice cream bar delivery, landing women in the workplace and the saddle during wartime, and fueling Hollywood’s rebels. On view: a pristine model from every single year and a celeb’s rhinestone number. Pause for a selfie astride a hog.

Lunch at another Milwaukee legend, one of the Bartoletta family’s cafés. Lake Park Bistro occupies a historic pavilion above the majestic lake. Chef Adam Siegel was a Best Chef: Midwest winner in 2008 for his country French flair, including a silk-smooth chicken liver mousse and killer onion soup, on through classic bistro entrées to elegant desserts.

While here on the east side, pop into Villa Terrace Decorative Arts Museum, a Tuscan-styled mansion clad in class-act antiques; the gorgeous Oriental Theater, a Roaring Twenties beauty; and Van Trier, a neighborhood bar frozen in a time-warp with murals covering every surface, antlers galore and platoons of German steins. Fast forward to Black Cat Alley, a brand-new lane of arresting murals blooming on its bricks.

Grand finale: dinner at Ardent, refreshingly not-so-grand in decor (water pipes, iffy art) run by Best New Restaurant finalist Justin Carlisle, a genial chef who also patrols the cozy site topping off water glasses. His food sense is acutely focused. A nine-course tasting menu delivers even better (and with more complexity) than it reads. Justin’s curiosity propels him to experiment with, say, cucumbers three ways; a course dedicated to carrots (think apricot, mint); and milk: in bread, in butter, and in Muenster cheese, each produced from the same batch of flavorful milk. Beef tartare appears in a round the size of a snack cracker, layered with bone marrow and deviled eggs. See what I mean? The in-crowd knows to stop by after hours on weekends when Justin’s scene segues into Red Light Ramen, an underground speakeasy of slurpy noodles.

To get your own Beard buzz, check visitmilwaukee.org.