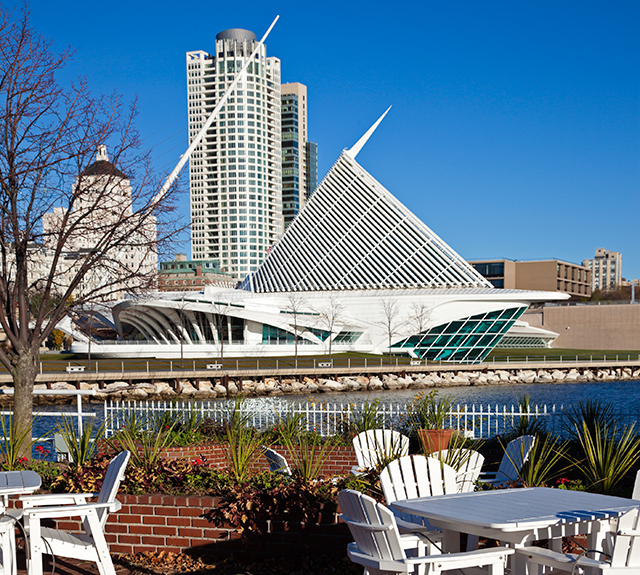 Milwaukee Art Museum on the lakefront

Anchoring both visions is the city’s iconic Art Museum, designed by Spanish star-chitect Calatrava with futuristic flying-buttress bird wings that flap open each day at noon. The art inside is equally arresting, going beyond its Old Masters with shows like haute couture from Ebony magazine’s Fashion Fair (through May 3), to be followed by Modern Rebels (Van Gogh to Pollack, Warhol to O’Keeffe). Meanwhile, rebellious lobsters have been netted by nearby Harbor House, boasting a postcard-ready lakefront view of twinkling city lights as you slurp the lobster fricassee, lobster Louie salad, bisque, or lobster roll while your politer companions enjoy trout and salmon. (Hint: happy hour oysters, only 89 cents.)

The bird wings point to neighboring caches of cool, like the sophisti-boho Third Ward. In it are behemoth warehouses reborn as epicenters of enjoyment, from out-there galleries (two dozen in the Marshall Building alone) to indie boutiques (don’t miss Shoo; Third Ward Jewelry; and NL Suits bespoke tailors, for starters) amid food finds ranging from destination cafes to the Public Market, an indoor emporium celebrating over 20 local vendors, highlighted by St. Paul Fish Co. with its (believe it) $14 lobster menu.

Close by, at trending Walker’s Point, enjoy breakfast at Story Hill BKC (bottle, kitchen, cup, celebrating what they do best) on artworks like shakshouka (local eggs in cumin-tomato sauce with smoked lentils, cilantro, goat cheese and sumac mayo) or local Clock Shadow quark on toast with housemade jam and local honey. Return at dinnertime for hog trotters atop kale, oyster mushrooms and cracklings, or pork country spare ribs with yellow peas and cabbage.

Snap up a second breakfast at Engine Company No. 3, which salutes local producers on a menu starring an omelet pillowing smoked pulled pork, sweet peppers, mushrooms and cow’s-milk cheese. Pork also rules the kitchen’s quiche, Salad Lyonnaise, pork loin sandwich with sweet and sour cabbage, a BLT and Club. Vegetarian? Clamor for the oatmeal with milk and dried fruit, all locally sourced.

Then aim for Second Avenue, where foodies patrol from Indulgence Chocolatier (include the Thai peanut butter truffle in your MDR), hosting pairings with spirits and cheese, to Purple Door Ice Cream; coffee roaster Anodyne; and Movida, a tapas-forward café spotlighting Spanish cheeses, sausages, and jamón, along with toasts (two words: pork belly) and individual paellas with a side of live guitar. Proceed to Clock Shadow Creamery, launched by Bob Wills because, for shame, his cheese-centric state boasted nary an urban factory. Changing that, his goal, he claims, is to “support farmers on the urban fringe” by making superior cheeses that reflect the neighborhood’s ethnic heritage, from German quark to Mexican queso blanco. His eco-stewardship shines in floorboards culled from the Pabst Brewing Company and a rooftop garden.

Farm to table? Please. Here, it’s roof to table, like Bob’s, and the Pfister Hotel’s bevy of beehives, supplying its Mason City Grill with a honey-sweetened pavlova topped with honey ice cream. The Pfister’s concierge, Peter, a Downton Abbey butler-type in cutaway, vest, and silk cravat, regales visitors with tales of its launch in 1893 as proof “the city had arrived!” Betting on a fad, they installed electricity instead of gas. Near its grand staircase and barrel-vaulted ceiling, where painted cherubs frolic, stands the atelier of the hotel’s artist in residence, currently showcasing an installation of a fainting couch and “bearskin” rug composed entirely of condoms. 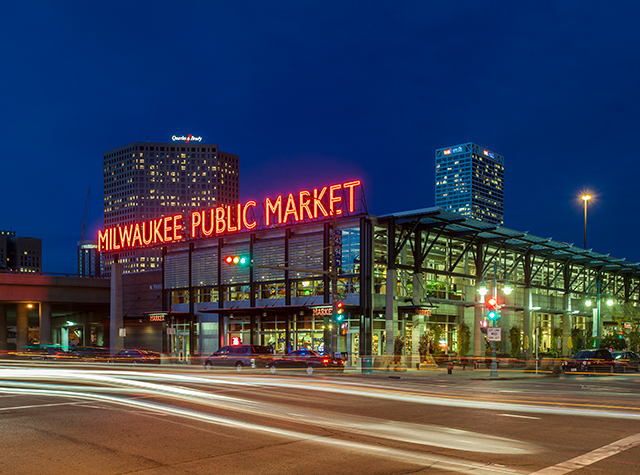 At dinner before a performance at downtown’s Milwaukee Repertory Theater, I’m overdosing on pork belly — maple-glazed and coffee-rubbed, served with caramelized apples and a potato-onion cake, abetted by a locally crafted milk stout. But here in Milwaukee, “high on the hog” applies to more than pigging out on the menu’s pork schnitzel and sausage-wrapped Scotch egg. Spend time at the iconic Harley-Davidson Museum, aside congregations of hog whisperers, and you’ll see what I mean. It salutes every model ever made by the hometown company, starting with Serial Number One in 1903. Inventors Harley and Davidson went from an initial annual production of three bikes to 20,000 ten years later, replacing the postal service’s ponies in 1916, outfitting police departments and the U.S. Army in wars abroad, and introducing the Sensational Streamliner in 1925 (“Gee, won’t they stop and look at you when you come riding down the pike?”). Then they gave us the 1950s model, “enabling your boy to enjoy the good, clean companionship of other lads interested in healthy outdoor sports” and giving ride to the postwar rebels and outlaws of the movies; and designed custom hogs for daredevil performers like Evel Knieval and Elvis Presley’s red model, purchased at age 21 on a $50-a-month payment plan. Climb on for a selfie at the end of your tour.

Prance the three-mile Riverwalk, heading north to Brady Street, to join a food tour (www.milwaukeefoodtours.com) that offers “a meal with a side of neighborhood history,” according to our guide, Robert. Brady Street, he explains, has evolved from Polish to Irish to Little Italy, followed by the dicey years of Miami Vice and Haight-Ashbury lifestyles until the locals said “Enough!” and reclaimed the avenue. Today it’s punctuated by our stops — first at Zaffiro’s, since 1957 an institution for pizza, Milwaukee-style (twice-baked cracker crust cut into squares, “tavern style”). Next, Cempazuchi, offering authentic Mexican fare like our tinga tacos, as well as tequila/mescal tasting sessions. On to Sciotino Bakery, as Italian as it sounds, for cannoli and an intro to Ham Sundays (another locals-only institution: after church, purchase a pound of ham and get six rolls gratis). Grand finale: Glorioso’s Deli, which lives up to its name, offering everything, from prosciutto and Parm to olives and espresso. (Don’t miss the Juggling Emporium across the street, just one of many indies showcased along Brady.)

To probe further into the Good Old Days, stroll through the Public Museum’s Streets of Old Milwaukee, or its even-older guide to the Near East’s Crossroads of Civilization, its brand-new permanent exhibit. The Jewish Museum also brings to life the business, cultural, and religious roots of those residents, including the original Settlement House with its James Beard-praised cookbook, founded by well-off Jewish families to aid more recent immigrants. Surprise bonus: a magnificent 1972 tapestry by Marc Chagall to honor Israel’s Prime Minister of 1969, Golda Meir, who grew up in Milwaukee (both were born in Kiev).

Dr. Eckhart Grohmann grew up here, too, and continues to feed his passion, which is collecting artworks from around the world depicting “Man at Work” from the 1600s (there’s a Breughel) to today. He donated over 1,000 works to the Milwaukee School of Engineering in 2001, which are housed in a building that’s an artwork in its own right, from mosaic-tiled rotunda with stained-glass ceiling to a rooftop garden patrolled by life-size statues. The collection celebrates what the doctor hails as “human achievement” in paintings ranging from “The Building of the Tower of Babel” to “The Building of the Autobahn”: shepherds, steel workers, dentists, brewers.

Speaking of which: From macro (Miller, Pabst, Schlitz) to countless craft micros with tasting rooms and tours, breweries are simply table stakes in this city. These days, it’s distilleries making a splash, such as MKE’s newest, Central Standard, in Walker’s Point, producing gin, vodka, and clear whiskey to savor in its tasting room.

The lakefront hosts a festival every summer weekend, beginning with Pride in June. But who can wait till then? Start planning your spree at www.visitmilwaukee.org.

One Gay City!
Over coffee, GLBT insider Paul Williams shared tips. Here’s where to hang out.