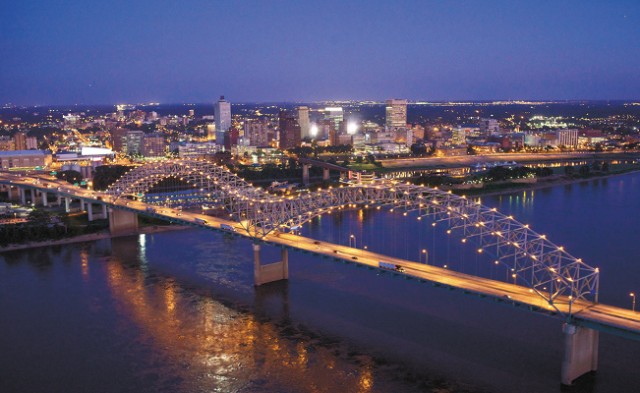 Memphis is the city of the Three Kings—no, not those guys on camels, but three 20th-century fellas with miraculous stories of their own: B.B. King, Martin Luther King, Jr.—and Elvis. The city’s identity is carved from the two rich veins they represent: music and race relations. The abiding message in Memphis is how they intertwined.

Now, Memphis is not your Nashville, all slicked up for company. Memphis is a gritty city, and proud of it: “The bad boy in the corner” of the state, its citizens insist. And make no mistake, “It’s not a Southern city, either. It’s a river city,” declares Carol Perel, curator of the Cotton Museum. “It was the big dog of the cotton industry. Back in the day, there were 200 traders here on Cotton Row, selling to the mills of England.”

These days, the action centers on Beale Street, the city’s original African American hub. Recalls B.B. King, “It was like college, where we helped each other: shops, cafes, hotels, clubs. It’s where everybody came on a Saturday night.”

Still is. The two-block stretch is the Mecca for live music, lit by flashing neon and accented by kids flipping down the street for tips. Close by stands and Rock ’n’ Soul Museum, your intro to Memphis Music 101. Start your visit here to absorb the social and musical gumbo that put Memphis on the map, from the songs of black sharecroppers, church gospel, jazz, blues and country, absorbed through the radio on a farmer’s kitchen table.

With the advent of radio, black and white music came together, led by black disc jockey-musicians like B.B. King at WDIA, which played the provocative rock and soul that lured white boys from Pat Boone—doing for music what, later, what Dr. King would do for civil rights.

Now you’re set to visit the recording studios themselves, starting with Stax, the Vatican of Soul, launched in 1957. Because its backers put music first, the place was colorblind—“integrated in a highly segregated city. Going to Stax was like going to church,” its director declares. Among the “choir” were Otis Redding, Isaac Hayes, and Aretha Franklin. 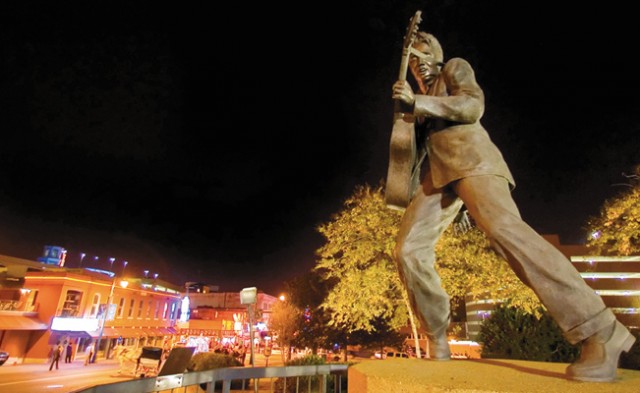 Over at Sun Records, its plucky founder, Sam Phillips, can claim “the Birthplace of rock ’n’ roll.”  “Here’s where it all started,” trumpets our tour guide in the studio where, for $3, anyone could waltz in and record a song—including Elvis, who made his first recording here. Sent over to WDIA, its DJ played it 15—some say 17—times in a row that first night. Just three years later, those swivel hips were on national TV.

Well, y’all know where Elvis’ first recording led: In 1957, at age 22, he bought Graceland for $100,000, then redecorated it top to bottom, as you’ll see on tour, from the blinding, all-white living room, to the den with three TVs, to the (in)famous Jungle Room, with waterfall, fake fur upholstery and green shag from floor to–and on–the ceiling. There’s the racquetball building, the trophy building (awards, jump suits), the private plane–bigger, fancier, than Air Force One–the dozens of shiny autos.

The message is far more somber at the Civil Rights Museum, housed in the Lorraine Motel where Dr. King was murdered. Exhibits lead from the belittling of Blacks, like Aunt Jemima, to positive firsts in sports (Jackie Robinson) and entertainment (Harry Belafonte).

The next section takes on more gravitas as it pursues the story of the push for freedom, starting with slave rebellions on through Jim Crow and the Ku Klux Klan to sit-ins, boycotts and marches: Little Rock to Selma, Birmingham to Memphis, with its I Am a Man movement launched by sanitation workers striking for equal pay, and, inevitably, the tragic day in 1968 when Dr. King was shot on this site. But remember his prophetic words:  “Some day there will be a Negro President of this country.”

Back to the Other King: Elvis films play during dinner at The Majestic, featuring mahi, ahi, and fine steaks. His favorite diner was Arcade, where you can revere his booth while carbing up on a breakfast of pancakes with a side of grits and biscuits. The world’s lightest biscuits, however, float from the ovens at Blue Plate Cafe, where the waitress (named Ruby, natch), calls you Darlin’. The Cockadoo serves an omelet homage to Elvis featuring PB and bananas. Or head to Brother Juniper’s, voted “best breakfast” by Memphians, for the creamiest grits. 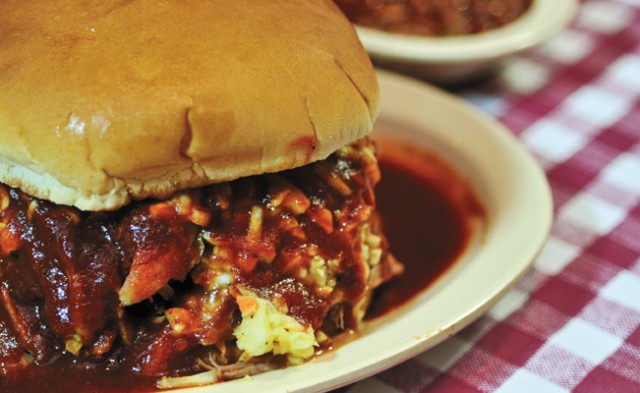 Best burger? Memphian swear by Huey’s, with a local Ghost River beer. Best chicken? Check out Gus’s shack, with the line out the door. Best ribs? Well, that gets tougher. The Rendezvouz has been firing the wood pit in a downtown alleyway since 1948. Come here for a dry rub and sweet tomato sauce. Over at Central BBQ, the bones are moister and the sauce a tad more tangy.

For a taste of modern cooking, head to Eighty3 in the stylin’ Madison Hotel, with its purple fainting couches, for mussels with chorizo; spaghetti with sweet-corn sauce; and shortribs in spicy peanut gravy. Or rest your head at the Peabody, the city’s grande dame, famed for its daily parade of ducks through the lobby, led by an official Duckmaster in full regalia. Peek into Lansky’s in the hotel, where owner Bernard Lansky likes to tell the story of “a young man looking at our displays. I told him, ‘Come on in,’ but he said, ‘I don’t have any money, Mr. Lansky, but when I get rich, I’m going to buy you out.’ ‘Don’t buy me out, just buy from me,’ I said.” And that’s how his friendship with Elvis began.”  He’ll fit you for your very own blue suede shoes; just don’t let nobody step on ’em.

Midtown is boys’ town and home to the Memphis Gay and Lesbian Community Center (www.mglcc.org).

901 Complex: hip-hop and R&B, drinks and drag shows; weekends only

Metro: the most cosmo, drawing an older crowd before 11, then the younger set