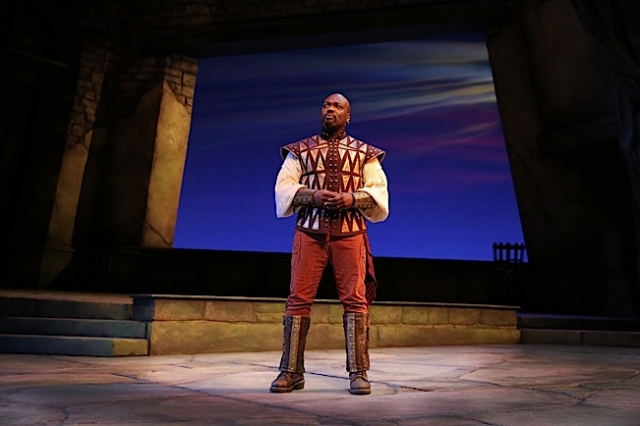 “What makes Iago evil? Some people ask. I never ask.”
-Joan Didion, Play It as It Lays
Marion McClinton has directed William Shakespeare’s Othello at the Guthrie with a searing eye toward the tragedy’s inherent indictment of sexism and sexual rumormongering. Those who speak highly of the bard’s enlightened view of women and what they’re up against will almost universally point to this play, subtitled, The Moor of Venice, to prove their point. But to be sure, there’s nothing academic or scholarly about the current Guthrie revival. Title role actor, Peter Macon, brings a raw primal power seldom seen in mainstream theater. He borders on being frightening times as he incrementally buys into the sexually based lies that Iago is feeding him about his innocent wife, Desdemona. 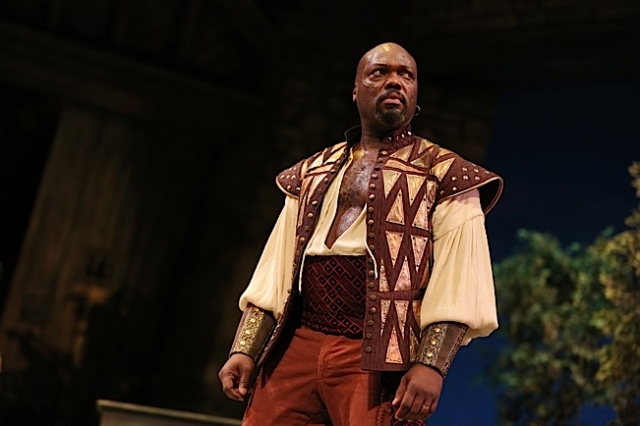 Macon is supremely matched by Stephen Yoakam, who may well be the best actor in the region, as Iago. It’s a role that every serious actor yearns to play so there have been countless terrific Iagos over the centuries. But Yoakam’s Iago has so burnished his will to distort into his everyday personality that one finds one’s self almost buying into him, even if you know the play! Like a corrupt politician people know is corrupt but then they rationalize and continue to vote for him (or her).

By coincidence I was listening to Newt Gingrich in a recent presentation on public radio and it was stunning how he got applause for earnestly complaining about various problems he himself had been instrumental in putting into motion and for which he has never honestly used his bully pulpit as former House Speaker to do what he might have to set those problems right. As if his hands were clean. And then the audience buys into it. This is disturbingly reminiscent of Iago and those who take him at his word.

Moreover, Gingrich the adulterer, in Shakespearean style, ganged up on Bill Clinton regarding the Lewinsky fracas along with Larry Craig, Ken Starr, and John Roberts. Indeed, it’s that type of sexual hysteria that Shakespeare was clearly warning us against four centuries ago. Bear in mind, that at that time, the Puritans were developing their clout to ultimately overthrow the English monarchy in the 1640s. They were a long gestating force that the bard was highly conscious of and concerned about.

Obie-winner McClinton, an iconic figure of contemporary African-American theater, also gets visceral results from the powerhouse Macon regarding race. Macon doesn’t try to ‘nicen’ Othello up at all. He makes the man extremely threatening. It’s an uncompromising and unsettling interpretation rooted in deep artistic integrity. 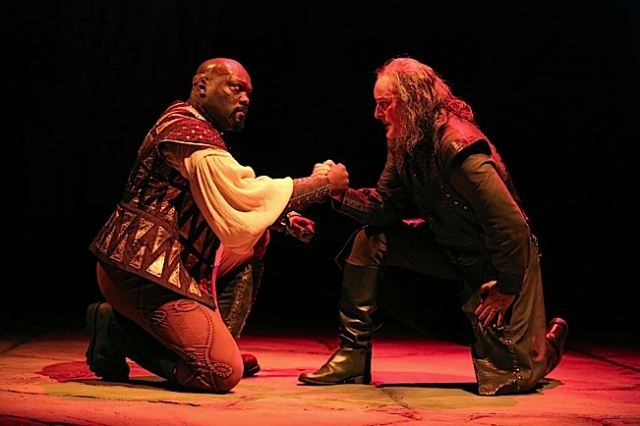 We also get a sense that he is an alien to the cultures in Venice and Cyprus where the play is set. There’s very much the sense that he’s an outsider and that Iago’s malice, expressed through Yoakam, though certainly indicative of the character’s overall mean-spiritedness, is also an expression that Othello’s blackness is something he innately finds repugnant. That said, Yoakam does not overplay that. It’s as if its just part of Iago’s negative energy field. 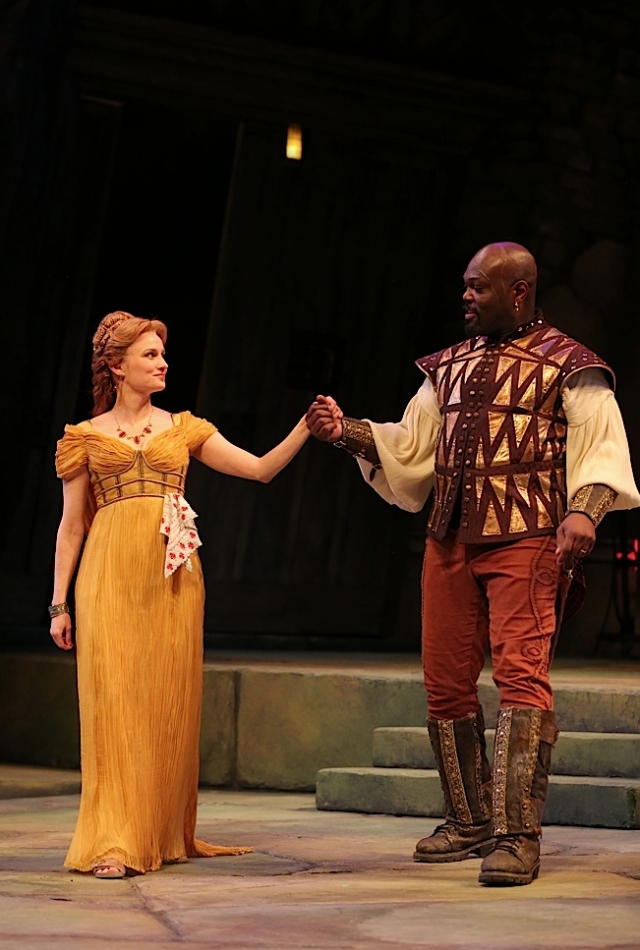 Tracey Maloney as Desdemona, Regina Marie Williams as Iago’s wife, Amelia, and Sun Mee Chomet as courtesan, Bianca, flicker as varied visions of Shakespeare’s concern about the sexual stigmatization that women can suffer by simply being women. The term ‘whore’ is used in ways that cut right to the marrow. It reminds one of the slut-shaming that sex columnist Dan Savage rails against. Hence, in seeing such a savvy and splendid revival of Othello I was reminded that what Savage rails against in our time, Shakespeare too was railing against in terms of his own time.

Note: Marion McClinton was named Lavender Spotlight’s Theater Artist of the Year for 2013.

Othello is also a great opportunity to deepen and clarify how the social roles of women were defined as the Middle Ages collapsed into the Renaissance. The Guthrie staging provides this.