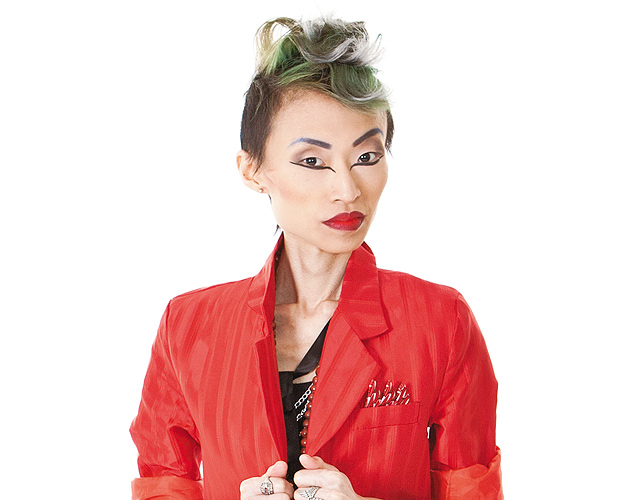 “A lot of the stuff has come from my recent trip to South Korea. I went there on tour for three weeks last September and I met my birth parents. It changed my whole life. A lot of songs came from that. Some of the songs were already written, so I changed them a little bit. I didn’t feel right about them,” she said.

Mayda’s distinct brand of soulful rock and pop has earned her plenty of fans, performances across the world, and spots on a diverse list of television shows (from Good Morning America to Jersey Girls).

The artist has plenty of performances scheduled in the coming months following the release of Busy Signals in May, including a gig at this year’s Pride celebration.

The performer was adopted at three months and grew up in a “typical dysfunctional midwestern family, with hotdish and whatever” in Como Park in St. Paul. She found an attraction to the arts early on. “My parents told me that whenever I would hear music in my crib, I would stand up and dance.” Piano lessons came first, followed a few years later by the guitar.

“In fifth and sixth grade, I really got into the blues and rock music. I listened to grunge-based bands like Nirvana. I was into Weezer and Jimi Hendrix. I got into my own music,” she said.

That included writing her own songs and starting an all-girl band, the Sugar Divas. That group gigged around for several years. “We weren’t able to hang out at the bars. We would have to sit in the alley or at Jimmy John’s and then play,” Mayda said. “We did get to play with a lot of cool bands.”

The band split up as the musicians graduated high school. While other members went off to college, Mayda continued to write music. Also, after writing and playing her own material for years, she decided to start singing as well.

“It is just something I couldn’t really stop doing if I tried to. The only thing that really interested me was music,” she said.

Which brings us back to her new album, which was touched by her meeting last year with her birth family.

“When I was younger, I didn’t have any desire to explore my roots, meet my parents, or have any contact with my birth family. I concentrated on being a cool teenager and an American girl,” Mayda said. “For some reason, in the past couple of years I felt the need to uncover that part of my life and see what happens.”

Mayda performed every day while touring Korea, but the meeting with her parents certainly affected the whole experience.

“I was definitely anxious about it. I wouldn’t say numb, but I was very much wrapped into my surroundings and my music. It didn’t quite hit me until after I met them. It was so fast and confusing,” Mayda said. “My first thought when I walked into the room was, ‘Wow. I don’t look like these people. It feels like I am meeting strangers. I could walk down the street in Korea and not think twice.’ They happen to carry my genes and they made me, and then they gave me away. I still feel this disconnect that I am still trying to cope with.”

Mayda is interested in connecting further with her birth family, but does note, “They live a $2,000 plane ticket away.”

All of these feelings poured out in the creation of the new album, which was crafted in home studios, mainly by Mayda with some guest musicians.

“It hasn’t helped to make sense of it, but it has helped me to release emotion. It definitely has spurred a lot of creativity. In that respect it is a great thing,” Mayda said.

Beyond dealing with the emotions of meeting her family, the new album also features a rougher edge than the past. “A lot of the songs use one take. Sometimes you record one part over and over again, trying to perfect it. This time, it has been more of one take to get that feel. It is definitely more organic,” Mayda said.

The artist is also stretching out in new directions, such as collaborating with Mu Performing Arts. The company, which explores the Asian-American experience in numerous ways, will work with Mayda to produce a piece to be performed in summer 2015.

“Randy (Reyes, the company’s artistic director) had seen me perform a couple of times, and I had seen him in M. Butterfly. I was blown away when he asked me,” Mayda said. “I have never acted before. I tried to be in plays all my life, but I have never gotten a part ever. Finding a character that would fit a small Asian girl is hard. I understand why I haven’t gotten any parts.”

“It’s hard because I feel like I don’t fit in the Twin Cities, musically. Everyone here is accepting, or they tolerate me. That’s a good thing,” Mayda said.

And the artist isn’t going away from music anytime soon. “Thank God I have music. I think I wouldn’t be here or would be in jail. Music is a safe way for me to connect with reality and be sane,” she said.