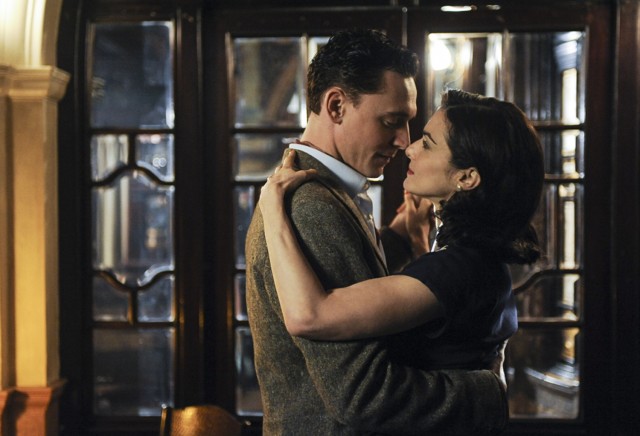 Preface: Recall that Great Britain’s homophobic legacy is marked by the death in exile of Oscar Wilde in 1900. Sixty-seven years later Parliament finally passed the Sexual Offences Act which decriminalized homosexuality. The bulk of Rattigan and Coward’s lives fit neatly within these two demarcations.

The gay subtext of Terence Rattigan’s 1952 drama, now a luminous film, both directed by and with a screenplay adapted by Terence Davies, shimmers between and within the lines and within the characters’ actions and interplay. It’s been said that it reflects elements of Rattigan’s relationship with a younger man who killed himself.

Protagonist Lady Hester Collyer, played with delicate anguish by the splendid Rachel Weisz, is tormented by suicidal impulses sprung from a love she feels for a younger man who cannot fathom the complexity of her feelings. Of course, many people across the spectrum will jump to conclude that his incapacity to comprehend must mean that he is ‘shallow’ but, it’s that impulse to so misconclude that I suspect Rattigan and Davies want us to seriously question. Just because her lover is a macho man doesn’t mean that he doesn’t have his own set of complex feelings. 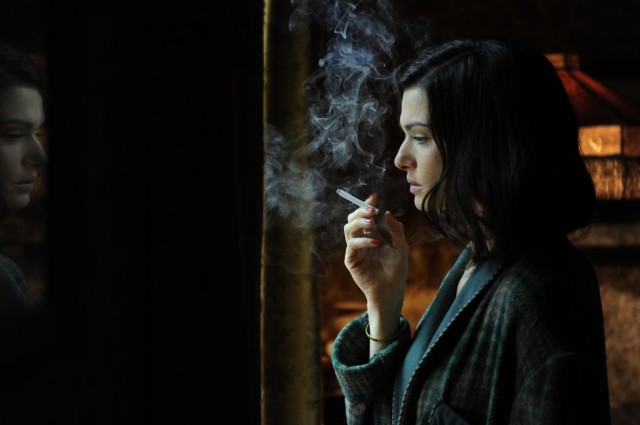 It’s worth noting that the film’s three main characters all live in alienation from the ravaged postwar world. Much of London that was bombed by the Nazis had yet to be repaired by 1950, the year in which the story actually takes place. The trauma of that time still seems to affect the populace five years after the Allied victory. The pub scenes of drunken patrons exude not cheeriness, but a desperate need to escape reality.

Hester’s older husband, a High Court Judge, is played by Simon Russell Beale with a stiff upper lip that suppresses an emotional hurricane. At one moments he frightens and disgusts because clearly Hester is his trophy wife, yet he has moments that wrench your heart because he does indeed, truly love her. And moreover, she, him. And that’s yet another tragic thread running through. Rattigan dares to suggest that we can actually love more than one person, which of course, implies consideration that monogamy and romance may not be the natural state of things.

Hester’s love for the younger airman sets us up for a classic case many gay men and heterosexual women endure over wanting their partner to embody stability and intellect, as well as physical beauty, virility, and passion. Some call that shallow. I call it human. My call is that she loves both men, therefore, her sexual attraction complicates that, given the puritanical, erotophobic, and stratified English class system. So must we then stamp a scarlet letter on her forehead?

Rattigan and Davies have us wrestle with this perennial conflict of lust v. love – spirit v. flesh, implying that perhaps there is something interconnected between the two. Is sexuality ‘primitive’ or ‘natural’? Hester muses ” I was brought up that it was the man who took the initiative in lovemaking” and that her father talked about “the pettiness of the physical’.

While watching Hiddleston’s volatile and magnetic performance, it hits us that given the 1950 setting, he suffers from what we now call post-traumatic stress. But it wasn’t till after our own Vietnam War that PTSD even came to be thought of as something that actually existed and should be addressed. Therefore, how could Hester, an innately compassionate and sensitive woman, not be drawn to his vulnerability? And in a nation, Great Britain, which like ours, constantly stresses its adoration and support for military men and guilt trips us if we don’t. And to be sure, Hiddleston brings out the lovableness in Freddie, not to mention he looks like a god. 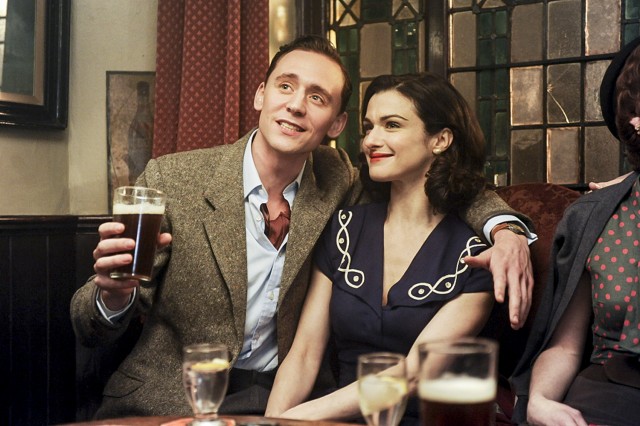 If we think of Hester as Rattigan codified, it brings to mind how two of 20th Century America’s great gay master dramatists, William Inge and Tennessee Williams, did the same in some of their plays. If we see The Deep Sea as configuring a passionate 40ish woman with a rigid 50ish husband, but engulfed in passion with a 30ish stud, it can also be seen as a feminist cry for a heterosexual woman to love as she pleases. For 1952 this was undeniably bold, if not brazen. That said, perhaps it still is. 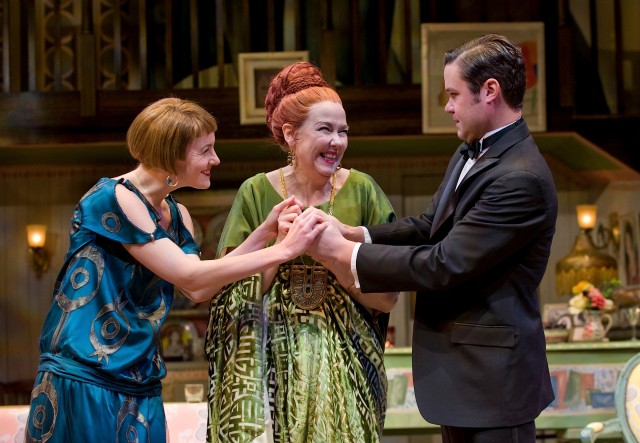 The plays of Noel Coward are distinctive for their continuously quick clever wit, pithy turns of phrase, and daffy characters who take their madcap world with the utmost seriousness. Comparisons with Oscar Wilde often arise. But Coward is sometimes accused -and with some legitimacy- that he trivialized the actions and pretensions of the upper class, whereas Wilde savaged them. Surely Wilde’s fate spurred on by his rebelliousness against heterosexism was sadder than Coward’s.

That said, savagery needn’t always be the rule to reveal frank truths about class and the Guthrie’s marvelous staging of Hay Fever (1925) shows us that. Think of it as a kind’ve British You Can’t Take it With You without the populist earthiness. (When Kaufman and Hart penned that 1937 Pulitzer Prize-winner one wonders if they’d caught Hay Fever.) Coward celebrates the eccentricities of an upper class family in a big old house. There’s financial uncertainty, but of course, that doesn’t spoil a good time in Coward’s universe and perhaps that’s the point, assuming this wonderfully silly play actually has one. 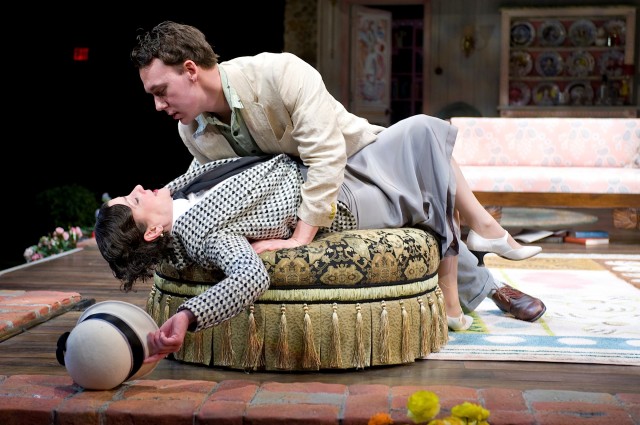 The UK’s Christopher Luscombe has directed his American cast with a full throttle ‘terribly British’ interpretation. The accents, rhythm, and style are impeccably executed. The spirit, infectious. This is the sort of topnotch production you will see on London’s West End, Great Britain’s version of Broadway. The superb voice and dialect coaching was done by D’Arcy Smith. 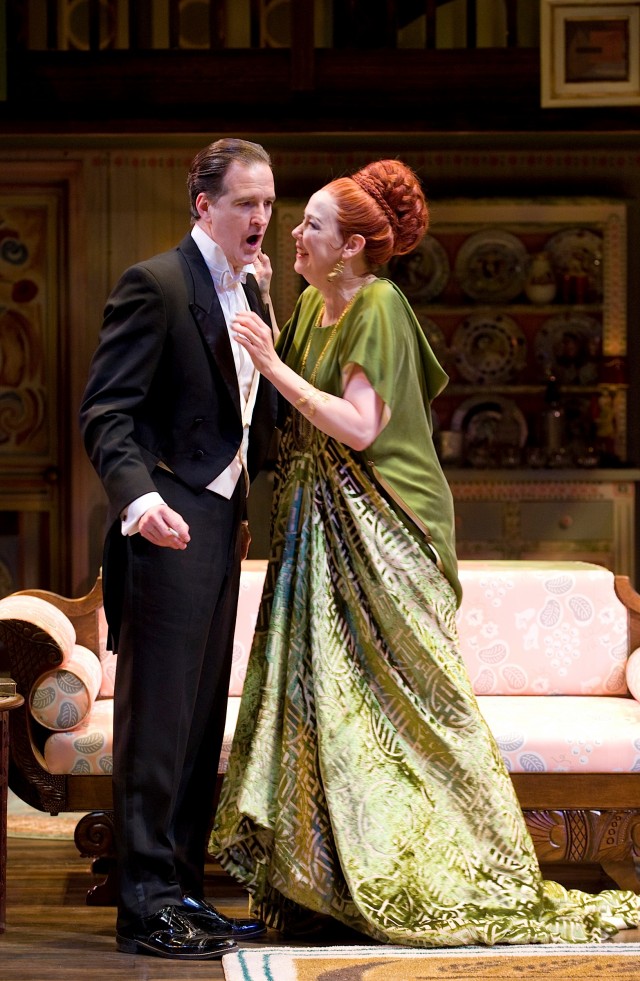 A Tony-caliber Harriet Harris astounds as the extravagant matriarch, Judith Bliss, who thinks nothing of entertaining a delightfully macho, much younger ring boxer (charmingly played by John Catron) right in front of her family. And they don’t seem to mind, which makes one wonder if Coward wasn’t making subversive comment that we should live and let live when in comes to other people’s physical desires, even our own mother’s. As with Rattigan’s The Deep Blue Sea, and you might also include Tennessee Williams’s Sweet Bird of Youth, we see a middle-aged woman claiming sexual freedom of expression with a younger man. A radical notion, then and now.