Maria Isa Takes Us Outside With Her New Album 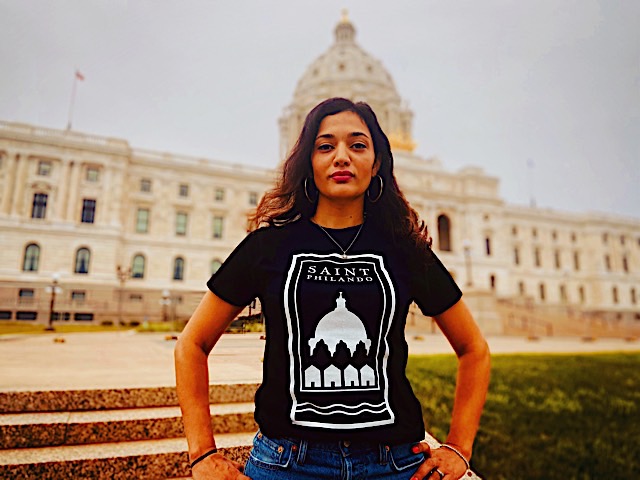 “I’ve been involved in cultural arts since I took my first breath on this planet,” says Maria Isa, a proud Puerto Rican raised on the West Side of St. Paul. “I was raised on traditional Afro-Puerto Rican, Afro-Boricua music of Bomba and Plena. That is a part of my blood.” Isa has been performing since the age of five. As a kid she got her hands on as many instruments as possible, including her own voice, and soaked up as many of the musical influences that surrounded her as she could.

“From my church music of Spanish mass and Latin mass mixed with the traditional indigenous music of Latin America, became a cultivation onsite of being a child of hip-hop,” Isa explains, “my music is really influenced by my upbringing of having this dual culture of being a proud Boricua, alongside the generation of the global movement of hip hop and Funk, of the revolution, so you hear that in my music.”

She started recording at the age of sixteen and was intentional with her art to create a space for herself and to create motivation for others where it was lacking. “I think now we’re seeing more and more inclusivity and acceptance within our own art form,” says Isa, but by industry standards, growing up she was one of the only female rappers on the scene. There weren’t many that were simultaneously doing drumming, rapping, and singing – all bilingually.

“You can’t sing in Spanish and in English, or you shouldn’t rap – pick one,” Isa says she would hear, “I always went against the grid. I always went against folks that were telling me no because I feel that art is revolutionary. Being a woman of color in hip hop and in representing my ancestors, I really did not take no for an answer, so I started my own record label.”

Since then, Isa has released and distributed independently over 15 albums under her label SotaRico. There is no funding from a major label, it’s all the independent work of Isa and her collaborators. Sometimes it’s easy for artists to get lost in the constant waves of new music but Isa says, “it’s important for folks to know that as BIPOC and LGBTQ artists we are demanding equity,” in all of the avenues to make and share music.

Her new album is a collaboration with artist YMMI and is titled Outside. It’s the follow up EP to their album Amor Universal. As an extension of the album’s theme of universal love they wanted to express their love of being able to go back outside, following a period of social isolation. “It’s a reminder of how important it is for us to engage in community, in conversations and to have fun,” says Isa.

Isa’s sound is very drum and bass heavy, with traditional styles, mixed in with Hip Hop, Pop, and EDM. “All of that is rooted in traditional Afro and indigenous music, so now being able to really have fun with technology and bringing out so many different layers of sound, it’s something that’s very influential into my production,” says Isa, “you might hear something that sounds like you’re in a club in Mexico, an EDM festival, or something that is more classical R&B.” You might even hear a pop ballad that started as a lullaby Isa would sing to her daughter.

Her daughter in turn has helped with the new album, “she just happened to do a little tune on her play keyboard and it got me right into the studio to create a melody for a song off the album: “Don’t Want to Miss a Day.” That experience for Isa was a reflection of why the beauty of music is therapeutic and how it’s educational and can show a different lens of this world.

As a songwriter and lyricist, Isa says, “Storytelling is being able to utilize our music as a platform for social justice and human rights.” Those stories, “take all the ingredients of what our day may be like and change certain poisons into medicine, or being able to bring some medicine to heal someone else’s poison,” says Isa. “Let’s reflect on that or let’s escape from it and let’s accept ourselves and be proud of who we are.”