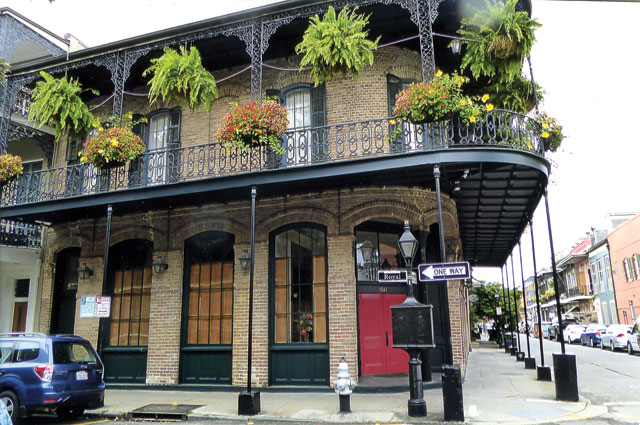 Every town in Louisiana worth its gumbo hosts a Mardi Gras celebration, but honors for the biggest, longest, and most lavish are held by New Orleans. This year’s date for Fat Tuesday—the final day of Carnival season, after which things turn all penitential during Lent—is February 13, and that’s the most popular time to visit (although parades—several daily—begin in January). This year’s festivities promise to top the usual over-the-top celebration because, in 2018, New Orleans celebrates its 300th anniversary. (In 2019, Fat Tuesday is March 5; in 2020, Feb. 25.)

In a city never famed for holding back, the gay krewe (as Mardi Gras clubs are called) named Petronius celebrates its own 50th anniversary, complete with a multi-float parade of revelers tossing “throws” to screaming crowds and a ball to end all balls. So, pack your tiara and head on down to the Big Easy, where life is just as promised: easy. (Visit www.mardigrasneworleans.com ) 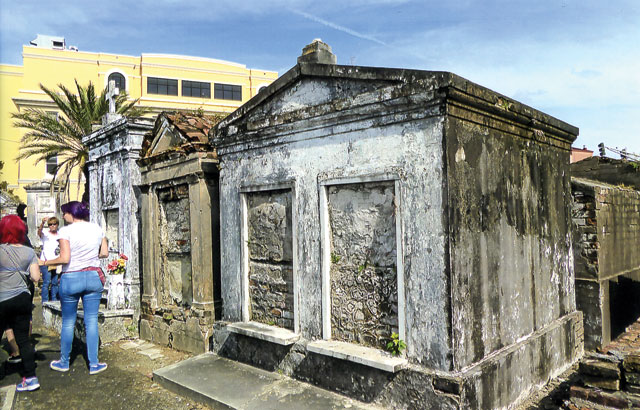 On a cemetery tour at St Louis Cemetery, where all tombs are above ground

To set the mood, stop in the Louisiana State Museum flanking Jackson Square in the heart of the French Quarter. The museum’s exhibits explain Mardi Gras’ history and customs and shows off evidence of its excesses in the form of sparkling crowns, fur-trimmed robes, and a collection of “throws”—bangles, coins, candy—parade krewes fling to crowds screaming, “Throw me somethin’, mistah!”

Then head to Mardi Gras World, already planning next year’s extravagant displays, for a behind-the-scenes glimpse of how these floats are built. Peek into the studios of craftsmen sketching out ideas, slicing through giant blocks of Styrofoam, attaching lights and glitter: whatever it takes to create a masterpiece of papier mache. Then wander through aisles of past floats, camera at the ready, and the giant statues of celebs atop them—everyone from Winston Churchill to Elvis and King Kong. You’ll be treated to a slice of King cake while watching a film of parades past. Oh, you came without a mask and baubles? There’s a gift shop, of course.

Next, time to do what every savvy tourists comes here for—to gawk and eat. Start your day in the French Quarter, the heart and soul of the most romantic city in the land. At this hour, I won’t claim the Quarter is awakening, for this is a city that never sleeps. At riverside Café du Monde, open 24/7 for well over a hundred years, tables are thronged with early risers rubbing elbows with revelers calling it a night, united in their craving for café au lait and those famous beignets dripping powdered sugar as a sidewalk sax player ripples off a riff. 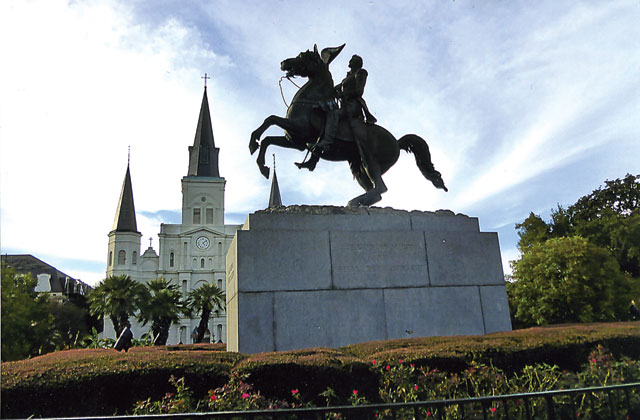 Lafayette Square, the heart of the French Quarter with a statue of Andrew Jackson in front of St. Louis Cathedral

The café makes a great citadel for surveying camera-ready Jackson Square, the cornerstone of Old New Orleans. It’s anchored by photo-ready St. Louis Cathedral, named to please the French, who once owned the land. That’s Andrew Jackson, smack in the middle of the greenery, tipping his hat to the ladies from his bronze horse. On either side, rows of aristocratic apartments, fashioned in the 1850s, boast graceful ironwork balconies, beneath which shopping boutiques beckon and sidewalks bristle with artists drawing caricatures, silent mimes, fortune-tellers plying tarot cards, and tap-dancing street musicians.

This city’s made for walking. Sign on for a tour to penetrate the mysteries within the elegant townhouses of history’s aristocrats and the voodoo practiced by their slaves. Or DIY it, sashaying from the fancy antiques shops on Royal Street to the bars with go-cups for your 6 a.m. mimosa lining Bourbon Street. Poke through the original riverside market halls where steamships landed—now farmers’ and flea stalls—or the literary haunts of Faulkner, Tennessee Williams and Truman Capote.

Lively? You bet. So are the city’s elaborate above-ground cemeteries called Cities of the Dead. Guides lead tours through its most monumental—and notorious, St. Louis Cemetery #1. Or greet sweaty joggers as you stroll the spacious Moonwalk anchoring the Mississippi levee, where barges and paddleboats go about their business. Pop into the riverside aquarium for an up-close and personal encounter with gaping gators and global swimmers. Or take a paddleboat cruise upriver to Audubon Zoo. Nearby, ogle the fancy mansions of the Garden District, where you can join a walking tour to spy on the homes that housed the rich and famous, from Jefferson Davis to Anne Rice.

The emerging Arts District, bordering the Quarter, is best viewed afoot, too. Peer into contempo galleries on your way to the Ogden Museum of Southern Art, a treasury of works by the region’s best, including Eudora Welty’s photographs and paintings by Tennessee Williams. (Who knew?) A block away, the National World War II Museum dramatically unfolds the story of that monumental war on both the European and Pacific fronts through gripping interactive accounts, artifacts, and photos. Enter President Truman’s mind to debate whether to drop the bomb, or Eisenhower’s, weighing the bad-weather challenges of D-Day. 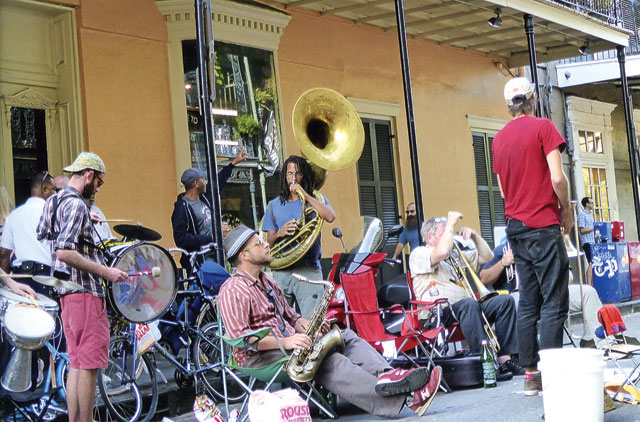 Street musicians at the French Quarter

An amble farther into this Magazine Street neighborhood, where prices are friendlier than back in the Quarter, reveals quirky antiques shops, forward niches of couture, and home-made everything, from gumbo to gossip. (“Well, that’s a tacky place to hold a funeral,” I overheard.)

Puts you in the mood for all that jazz? New Orleans—the birthplace of Jelly Roll Morton, Satchmo, Mahalia and the Marsalis clan—delivers it longer and stronger than any other city. Preservation Hall, a cramped and dusty storefront, is the most venerated venue, while popular up-and-comers line Frenchman Street.

Residents of this city have got their priorities straight. Eating is a contact sport, and “diet” is a cuss word. From its Creole and Cajun kitchens come the dishes gourmands dream of, such as gumbo, jambalaya and etouffee. It’s no surprise that Bananas Foster was invented here, along with artery-annihilating Eggs Sardou; both are specialties of Brennan’s brunch (Sunday would be too seldom to enjoy this feast, so it’s featured every morning). The same Brennan name is behind the legendary Commander’s Palace and its in-demand jazz brunch.

For oysters, grab a seat at the counter of a dive called Acme to watch the shuckers arm-wrestle the shells. For a po’ boy, it’s Napoleon’s, claiming to be the oldest bar in the city. For a mile-high muffuletta, head to Central Grocery, and carry your sandwich across the street to the banks of the river to enjoy. My all-time favorite breakfast haunt is Mother’s, where you sit down to eggs and bacon and grits and biscuits and gravy and what-all else, and the career waitresses call you darlin’.

Gumbo? It doesn’t get better than at the Gumbo Shop (home of the annual Stella-calling contest, torn t-shirts optional). Mulate’s and Michaud’s both cook up homey Louisiana victuals to ready you for free dance lessons when their Cajun and Zydeco bands begin to strum. Old-liners argue the Creole merits of the kitchens of Arnaud’s vs. Antoine’s, “but we’re a Galatoire’s family, so I wouldn’t know,” declared a genteel local, who wouldn’t cross the line.

This is a city it’s easy to fall in love with, but, sooner or later, you’ve got to say goodbye. For now, just let the good times roll! Visit www.neworleanscvb.com to plan your visit.