If London were the New York of England, then Manchester stands as its Chicago, the country’s burly second city. They’re sisters across the pond and under the skin. Both grew prosperous on the labors of a strong working class—cotton mills in Manchester, meatpacking in Chicago—and the same feisty labor movements, each launching raucous strikes to even the economic imbalance.

Manchester’s Peoples’ History Museum bristles with depictions of sweatshops, child labor (the Little Match Girl was no fairytale here), suffragettes, and abolitionists. And where but Manchester will you find a statue honoring President Abe Lincoln for his views? As I followed the museum’s depictions of the struggles for democracy, a teacher made sure his young charges got the message: “What does ‘rebellion’ mean? ‘Revolution?’” (PS: The kids knew the answers.) 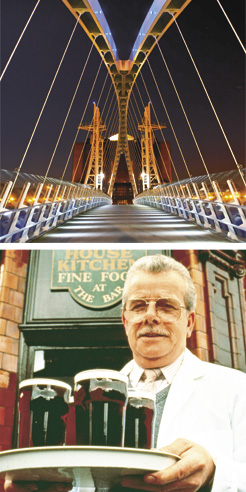 Both cities idolize their football teams. The Manchester Union plays in a sparkling stadium (tours available) at Salford Quay. The fans’ gritty, beat-the-odds-and-win spirit explodes again in the quay’s War Museum, designed by celeb architect Daniel Libeskind with a deliberately confusing entrance to underscore the message that war is shattering—as depicted inside in interactive form. What was the worst pest in the trenches: lice or maggots? Put your hand in the box, and feel the answer. Worst smell? A nose test, too. Listen to recorded accounts of soldiers, prisoners, evacuees. See films of Manchester’s repeated bombings. Then, step back onto its busy streets, bustling with the famous Manchester swagger that forestalled defeat, and join the lads for a pint or three in the nearest pub.

Explore the Art Museum (all museums are free) with its happier message, conveyed in its peaches-and-cream pre-Raphaelite portraits, and earlier scions, full of the original Manchester swagger, whose likenesses roam the streets today. An annex displays quirky Victorian collections, like that of one compulsive, Mary Gregg, who amassed everything from thimbles to stuffed frogs. It also salutes the designer-collector items of tomorrow: arty chairs to Coronation mugs.

The John Rylands Library, an intricate Gothic landscape, houses collections of a literary sort, including the oldest existing page of the New Testament from 125 AD. Its Historic Reading Room (which earns those capitals) caused a passerby to whisper, “Is this a church?”

No, but St. Anne’s is, to be sure. John Wesley preached here in 1757. And so, of course, is the Cathedral, whose 19th-Century exterior envelops a 14th-Century interior boasting an elaborately carved wood choir stall, where a bit of that Manchester swagger sneaked in. What’s a pig doing in a church? A monkey?

Stroll to the nearby Manchester Wheel, a Ferris ride of swagger supreme, offering overviews of the city. At its foot spill the city’s prime shopping streets, as well as the Royal Exchange Theatre, with an in-the-round stage where you’re up-close-and-personal with performers like Hugh Grant and Helen Mirrin.

Just beyond stretches the Northern Quarter, a countercultural enclave teeming with “dead-trendy” (as they say) boutiques, vintage clothiers, used bookshops, ethnic cafes, and clubs bouncing with live music. Swing south, in this easily-strolled city, to Chinatown, the largest in Europe, with its iconic arch.

Manchester’s Gay Village is centered on Canal Street, hemming the (duh!) canal with a rainbow of hotels, bars, clubs, outdoor cafes, and indoor pleasures. TV’s British Queer as Folk was based here. A Pride Parade ignites the city every August, while October brings a gala Gay Wedding Show, which has tied the knot for more than 6,800 couples since same-sex marriage became legal in 2004. Visit: <www.visitmanchester.com/discover/lgbt.aspx>; <www.manchestergay
bars.com>; <www.gayweddingslow.co.uk>.

Trade your swagger for a cool and polished stance to enjoy the town’s premier eateries, leading off with Opus, star of the five-star Radisson Edwardian Hotel, which occupies the venerable Free Trade Hall of 1858—home to every stripe of performer from Dickens to Bob Dylan and Madonna. Opus One, its restaurant, boasts star-quality fare like my starter of liver pâtés with green tea jelly—or choose the smoked venison carpaccio, or terrine of organic salmon with lime-and-avocado mousse. Proceed to brill with scallion and crab ravioli—or prime rib with corned beef-and-shallot hash, maple-infused veggies, and potatoes roasted in duck fat. OK, pikers can choose a luscious roast vegetable paella. A platter of elite British cheeses makes the perfect finale—if you’re immune to the banana parfait, that is.

Michelin-starred Chef Michael Caines plunks his stellar restaurant in the ’50s-themed ABode hotel, where foodies can savor a salad of crispy-crusted egg atop watercress puree and soft cheese, then proceed to salmon upon a fricassee of lentils, with nettle puree and fennel foam. Follow with a prune-and-Armagnac soufflé and matching ice cream. Or opt for the ambitious tasting menu.

Upper-crust clothier Harvey Nichols also hosts a stylish restaurant and a casual brasserie, where you’re invited to dine on rabbit-and-black-pudding ravioli; Cheshire beef with truffle gnocchi; and, indeed, that all-time British icon, fish and chips with mushy peas (you had to have been there).

Atmospheric pubs, as prevalent as pigeons, include Britain’s Protection—200 years old and still pouring pints of Rust (a lager) and Mary Rose (bitter) amid coveys of revelers.

American Airlines flies directly from Chicago to Manchester, which makes a getaway supereasy. Contact www.AA.com> and <www.marketingmanchester.com> to make your plans. Carla Waldemar