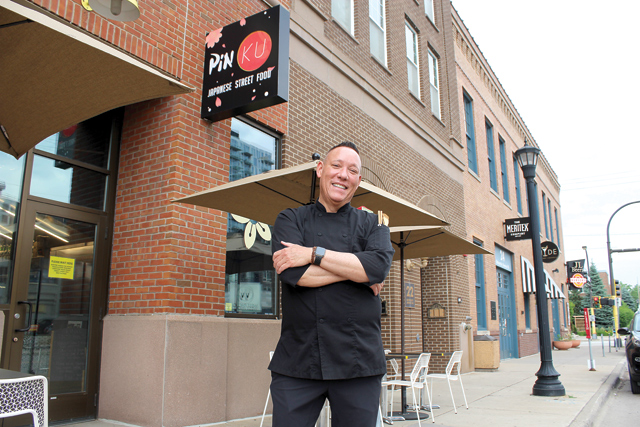 The owner of PinKU Japanese Street Food is cooking up something good in Northeast Minneapolis.

You can say Chef John Sugimura has an obsession.

Sugimura captures the flavors of Japan and serves them at his restaurant, PinKU Japanese Street Food. The original location in Northeast Minneapolis opened in June 2016.

“I cook updated classics with true spirit, fresh flavors, and ingredients that would make my chef grandmother proud,” Sugimura said.

Sugimura’s grandparents immigrated to America in 1917, and his grandmother operated a thriving restaurant in Sacramento, California.

That was until World War II. On February 19, 1942, President Franklin D. Roosevelt signed Executive Order 9066. That document cleared the way for the forced removal of all Japanese Americans from the West Coast. By the spring of that year, 180,000 Japanese Americans were relocated into so-called assembly centers.

“My family was forced into Tule Lake,” Sugimura recalled. “They experienced incarceration behind barbed wire and were living in barracks. In 1946, my family left the war camp with five pieces of luggage. My family eventually moved to Minnesota where I was born and raised. Our strong spirit persisted.”

Because of his family’s history, Sugimura is an advocate for the culturally accurate retelling of the Japanese American experience. He became a chef to celebrate the values of traditional Japanese cuisine, and in turn, brings the culture to new audiences. 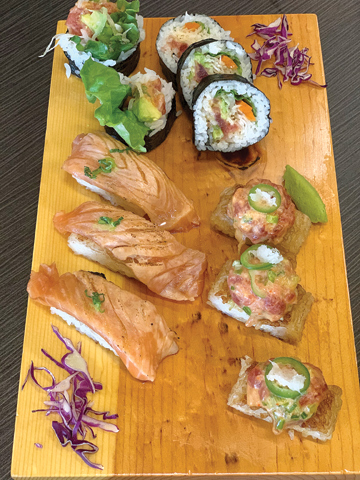 As a protégé of the revered master sushi chef Katsuya, Sugimura apprenticed in Katsuya’s Little Tokyo School, now known as Miyaki Sushi and Washoku School, and part of the Japan Culinary Art Institute. He also worked in Katsuya’s California restaurants in Hollywood and Beverly Hills before returning to Minnesota to eventually start PinKU Japanese Street Food.

PinKU is the Japanese word for pink. “Pink is powerful. Pink can help us try to overcome stereotypes,” Sugimura said. “PinKU is my desire to educate and share the true Japanese American experience.” 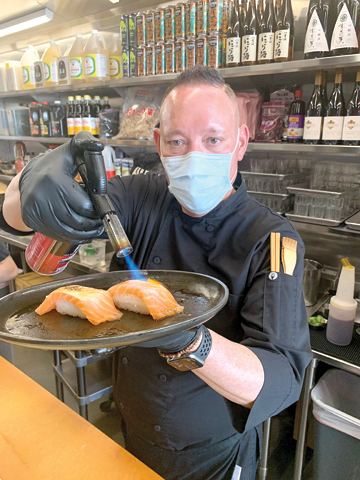 And when it comes to the ‘Street Food’ part of the restaurant’s name, the experience is more upscale than ordering from a food truck. Sugimura tells me that in Japan, street food is used to describe any restaurant that isn’t high-end, fine dining.

As I entered PinKU in mid-June, you can tell the chef and his team made drastic changes to accommodate to COVID-19 guidelines. The Minneapolis ordinance requiring face masks is strictly followed inside, and upon entering, you’re greeted by a bottle of hand sanitizer.

“The COVID-19 virus has created upheaval for PinKU,” Sugimura said. 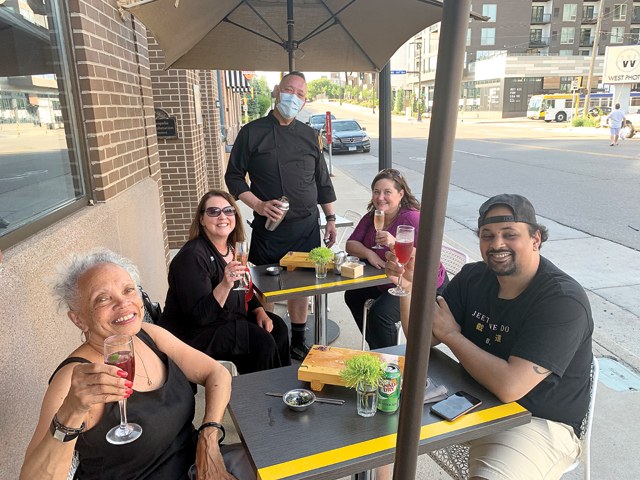 I asked Sugimura if things will ever go back to the way they were before the pandemic. “Normal wasn’t working and broke,” he replied.

If there’s one thing that hasn’t changed at PinKU, it’s the taste and quality of the food. I had the pleasure of eating at PinKU multiple times before my interview with Sugimura, and I knew the Gyoza, or Japanese pan-fried pork dumplings, are a must.

I asked Sugimura what he would order. “When I’m really hungry, I will get two orders of the crispy shrimp,” he said as he pointed to wood planks on the wall depicting menu options. He encouraged me to try the spicy tuna on a crispy rice cake along with an order of the dumplings.

The crispy shrimp, served on seasoned rice with a spicy mayonnaise, is incredible. You will want two orders, and you won’t want to share. The food comes in smaller portions, and equally smaller price points, too. The crispy shrimp is $7 and an order of Gyoza will set you back $6.

PinKU holds the highest rating on Yelp for any Japanese restaurant in the Twin Cities, and according to Sugimura, it has the highest Yelp rating for any Japanese restaurant in the United States. One reviewer says, “PinKU offers such high quality Japanese Street Food that is both casual yet refined…and is so good it kinda hurts. They value ingredient quality over quantity, and the food and variety is so worth it.” 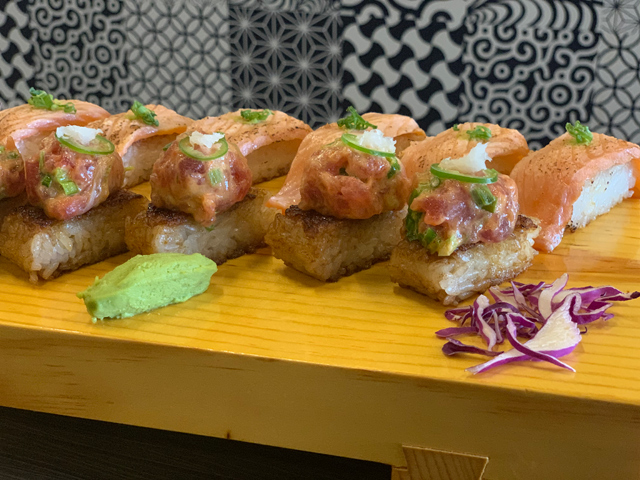 Instagram-worthy food at PinKU Japanese in Minneapolis. In front: spicy tuna on a crispy rice cake. Back: Cured and seared salmon with home-brewed soy. Photo by Mike Marcotte

A sense of belonging

Sugimura, who publicly identified as gay in college, has positive memories from telling those he loves most he is attracted to men. “I remember hearing my mom say, ‘I love my gay son,’” the restaurant owner recalled. “My parents treated me special and made sure I knew I was fine just the way I was.”

The restaurant community can be more isolating for those who identify as LGBTQ. “Serving Japanese food and a gay chef is a very unique combination in the restaurant industry,” Sugimura mentioned. “Often, I feel like I am on my own island.”

Sugimura understands that sometimes the only thing you crave is a safe place where you can relate.

“In 1998, in Kyoto, I was waiting to cross at a busy intersection, and I was stunned to observe a sea of black-haired people,” Sugimura said. “For the first time in my life I was the majority. That experience defined me as a proud Japanese American, and unleashed my courage to become a highly regarded Japanese American chef to tell my story.”

With isolation real for so many people during COVID-19, I asked Sugimura for advice on overcoming adversity for those who feel alone. “I was raised to be courageous and I have the wherewithal to pursue what is right,” the chef said. Having courage will take you places.

Sugimura also credits his partner of 24 years, Brian, for help. “Navigating through the pandemic with someone by your side to help with problems as they arise has minimized the torture,” Sugimura said.

In October 2019, a second PinKU location launched inside a brand new food hall inside Minneapolis-St. Paul International Airport. According to Sugimura, the process to open that location started three months after his first location started serving customers in Northeast Minneapolis. A 10-year contract was awarded in March 2017, and you will find PinKU overlooking the runway in Terminal 1.

In addition to being a restaurant owner, Sugimura is a corporate executive chef for Twin Cities base food management company, Taher. They provided him the platform to create exclusively Japanese cuisine for venues around the country, including the FBI Laboratory in West Virginia.

Sugimura recently became the first outside executive chef to join the team at Minneapolis-based Chowgirls Killer Catering, an invitation he calls humbling.

Don’t expect the end of PinKU, or the delicious creations from Chef John Sugimura, anytime soon.

“PinKU is small and lean and fit to survive,” Sugimura said.