Magnificent Vocals Rule Over “La Mancha” at the Ritz 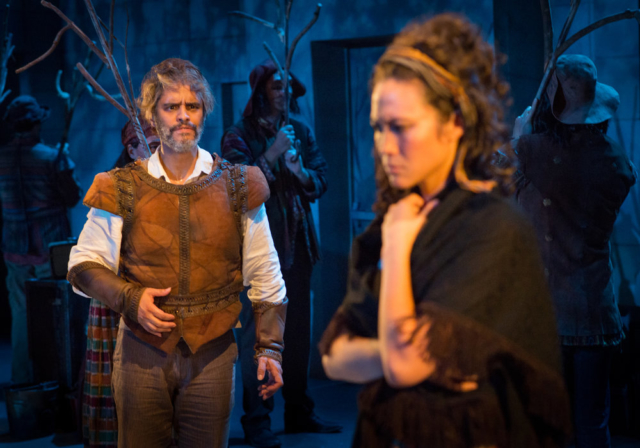 Don Quixote looms as one of the emblematic figures of western literature. Spaniard Miguel de Cervantes had penned perhaps the most enduring of idealists when he finished his novel in 1604. At the same time William Shakespeare was in full swing on the English stage. In 1964 book writer Dale Wasserman, composer Mitch Leigh, and lyricist Joe Darion created what has become one of the most soulful musicals ever. And Man of La Mancha will probably last at least another four centuries. It is incomparable.

Theater Latte Da and director Peter Rothstein have staged a moving revival of Man of La Mancha at the Ritz Theater that soars with magnificent vocals guided by music director Denise Prosek and earthy performances that capture the grit and squalor of the rough side of life that is always with us. The set up is an assemblage of alleged heretics arrested by the Inquisition.

Don Quixote, an alter ego for Cervantes, is brought into a holding chamber with other prisoners, all of whom are cynical and pessimistic. Their jaundiced life view is hostilely reactive to his idealism. Therefore they subject Quixote (Martin Sola) and his dutiful squire, Sancho Panza (Zach Garcia), to a mock trial. We witness what may be musical theater’s most absorbing metaphorical court room drama.

As the Don sings and shares his side of the story, the others find their hostility eventually melting away into pure vulnerability. The endearing Sola was born for this role and his vocals, blended with numinous insight about the character’s chivalrous goodness, make for a magnificent performance. His rendition of Dulcinea and the show’s most widely beloved tune, The Impossible Dream, are transcendent.

Sola is contrasted stunningly opposite Meghan Kreidler as the defensive Aldonza, who survives by selling her sexuality. Her renditions of the bitter It’s All the Same and that devastating tune simply titled Aldonza are breathtaking.This actress beguiles as she wrangles and wrestles aggressive louts to the rhythms of Prosek’s impeccable music direction and Annie Enneking’s dynamic fight direction. (The balance between Prosek’s musicians and the singing actors is perfect.)

All actors are fabulous but there are two supporting standouts: Rodolfo Nieto elicits a marvelous masculine resonance in both voice and physical carriage in various roles. Jon-Michael Reese brings lovely sensitivity to the small but crucial role of the Padre.

Rich Hamson’s period costumes serve the essence of Man of La Mancha beautifully but they are undercut by Michael Hoover’s contemporary sterile holding chamber set. This clash of concepts, which the director most likely authorized, is not reconciled at any point. The show runs over an hour and a half with no intermission. That is unreasonable and undercuts the magnificence this production neverthelesss achieves. (People need to use the facilities.) That said, this is a brilliant production and the program notes are brilliant in their own right as well. So save your program after you’ve seen it. 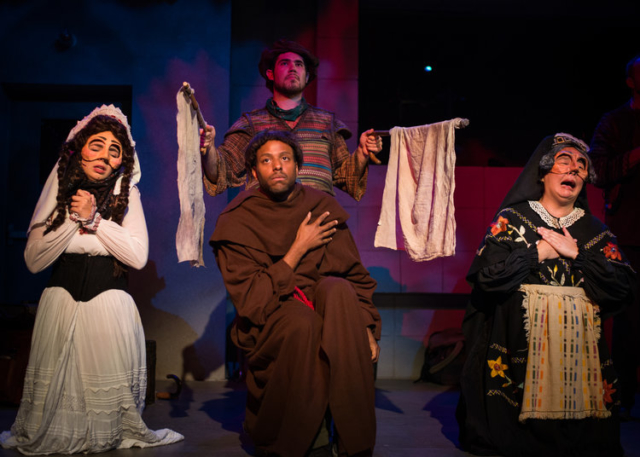