What’s that wafting in the air? It’s the scent of quirkiness; the sweet aroma of a lifestyle that’s both lively and laid-back. It’s Perfume de Madison, four hours east (and left) of the Twin Cities. It’s Wisconsin’s capital. And capital of cool. A compact urban center where town and gown are joined like ham and eggs (organic and heirloom, of course): the lawmakers, lobbyists (and protesters) of the State Capitol building, the city’s epicenter, balanced by the scholars of the university. An isthmus, meandering between two city lakes, links the two. 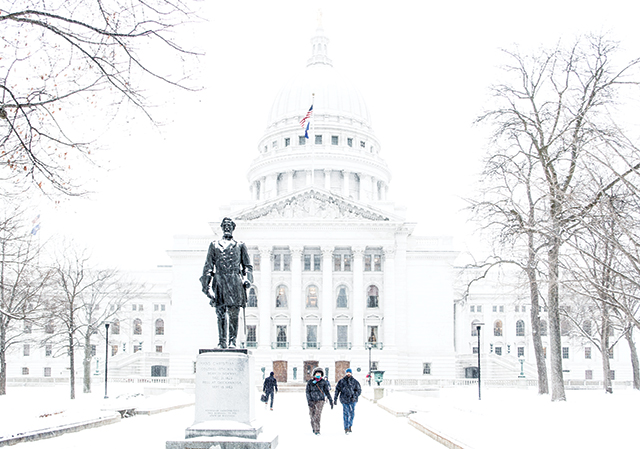 Let’s start our visit at the Capitol itself (free tours), crowned by the fourth-floor observation deck with a 360-degree cityscape and, just above, a golden maiden pointing “Forward” (that’s both her name and the state’s motto) — or, as wags smirk, a hint to the governor to make an exit.

The circular greensward carpeting the Capitol approach is claimed by locals as their outdoor living room, home of free concerts, picnics, a parade of food trucks, and a weekly farmers’ market (mid-April through mid-December).

The real estate belting it boasts a wine bar, trendy restaurants, and shops like Fromagination, boasting 150-plus Wisconsin cheeses cut to order — “nothing you need, but everything you want,” explains owner Ken Montleone as he hands out samples.

A few steps further and you’re at the Wisconsin Veterans Museum, an anything-but-dusty panorama of the state’s role in wars from Civil (Wisconsin’s famed Iron Brigade led the Battle of Antietam) through Spanish-American, Philippine, Mexican-American (heavy wool uniforms in the torrid Texas heat?), to World Wars I and II, Korea, and Vietnam (first chance to fight in combat zones for blacks, Hispanics, and women). P.S. The gift shop sells marionettes personifying the state’s greats, from Hank Aaron and Georgia O’Keeffe to Sen. Gaylord Nelson.

Follow MLK Boulevard to Monona Terrace Convention Center, the last building by homeboy Frank Lloyd Wright, designed in 1938 to echo the nearby Capitol but left unbuilt until approved posthumously in 1992 (free tours). A photo gallery reveals his inner persona, while a gift shop peddles his designs blanketing everything from scarves, ties, and jigsaw puzzles to the snow globe he would have hated.

Join the bikers streaking aside Lake Monona below, or retrace your steps to State Street, a seven-block pedestrian-only ramble ending at the campus. It’s crammed with coffeehouses like Steep ’n’ Brew, ethnic eateries from Peruvian to Laotian, Mexican to Greek, and indie boutiques, both fine and funky. Refresh yourself at HopCat, sporting 130 brews on tap (many, many from Wisconsin) or Red Elephant, whose best-selling house-made truffles include crème brûlée and salted caramel whiskey. Vom Fass offers gourmands an opportunity to bottle-to-go their choice of olive oils, vinegars, and spirits (even cognacs and single malts). Or simply grab a bench for some of the best people-watching on the planet.

Revive your inner artist at Madison Museum of Contemporary Art (MMCA) on State Street, designed by star-chitect Cesar Pelli, sporting shows like “Death in Venice” — singular illustrations by a professor emeritus from the U’s Art Department. The gift shop’s well-curated collection of home and body accents is dangerously alluring.

On the campus, brake for more art in the (free, as are all museums) Chazen Museum’s immersive collection of every bold name in modern movements: Picasso to Henry Moore, Grant Wood to Grandma Moses, Salvador Dali, Andy Warhol — plus Asian and African treasures.

Then stride to the student union, with its beach-side terrace aside Lake Mendota: beer, brats, and campus-made ice cream (follow the long lines). Free concerts, too. (Does anyone ever study around here?) Hikers can ramble all the way to Picnic Point, anchoring the lakeside nature preserve.

Now you’re more than ready for the very best reason to visit Madison, and that’s dinner. Farm-to-table is a sub-set of the Ten Commandments here, initiated decades before it became common parlance. In the vanguard, l’Etoile, aside the local Farmers Market from which it gleans its fixings, is headed by James Beard-blessed chef Tory Miller, who serves seasonal starters like sweet corn and bacon risotto and Hook Farm’s cheddar with heirloom tomatoes and watercress, concluding (be still, my heart) with black raspberry crème brûlée and carrot-molasses spice cake aside honey-raspberry custard. Nearby, his new venture, Graze, wows diners with a Wisconsin charcuterie and cheese board (and a pickle board, too), to augment maybe the best grilled cheese in the state (hint: Graze is one of the few locovore havens that’s open for lunch). The latest: Tory’s take on Spanish tapas, celebrated at Estrellon.

Johnny Delmonico’s is a state-of-the-art steakhouse (primo fish and chicken, too) also starring a BLT-turned-BLAST, thanks to creamy avocado and crispy pea shoots. Fresco, perched on the rooftop of the MMCA, has lured a chef from New Orleans, who’s introduced his signature seasonal dishes like a snap pea chiffonade with mint and house-made prosciutto; grilled peach salad dolled up with goat cheese, honey, truffle oil, and walnuts; and “bayoubaisse”: Creole tomato broth licking andouille sausage, crab, shrimp, and green tomatoes atop rice. Oh, and beignets — here enriched with milk chocolate. Don’t miss the celery-vodka-lemon cocktail, either.

Heritage Tavern’s best-seller? Maybe the devilled eggs, says chef/patron Dan Fox. Oh, but how about the crispy pork belly with tuna and foie gras with pickled mango-pineapple compote? The Wisconsin whitefish, transformed with lobster-coconut curry? And the Alsatian-braised heritage pork, from the farm where Dan walks the talk and raises his own pigs.

Ask him about Madison’s current dining picture? “It’s a big-city food scene in a smaller town. Lots of really fantastic restaurants.” Tory Miller agrees: “People are excited for yummy food from people that know how to make it.”

And that extends to breakfast. Marigold Kitchen is the place to be for not-your-mundane morning fuel, like duck confit hash. Roasted salmon frittata. Or simply extraordinary muffins. Short Stack Eats serves extraordinary variations on its namesake, plus a mean pulled pork on cheese grits to begin the day.

For more insider info (plus hearty samplings), join a food tour such as the one Otehlia Cassidy offers (www.madisoneats.net). From her options (downtown, bike, brunch, etc.) we chose to explore the up-and-coming Atwood neighborhood, stopping at Mermaid Café for its best-selling banh mi; One Barrel, a new micro-brewery; a taqueria (fried cauliflower filling, anyone?); Lau Laan Xang, showcasing mama’s recipes from Laos (hope it’s the day for squash curry); and Gail Ambrosius Chocolatier, among others. Good thing you drove — lots of room in the trunk. To learn more, visit www.visitmadison.com.

Bars:
Plan B: DJs, dancing, drag shows; one of the newer hits on “Willy” street