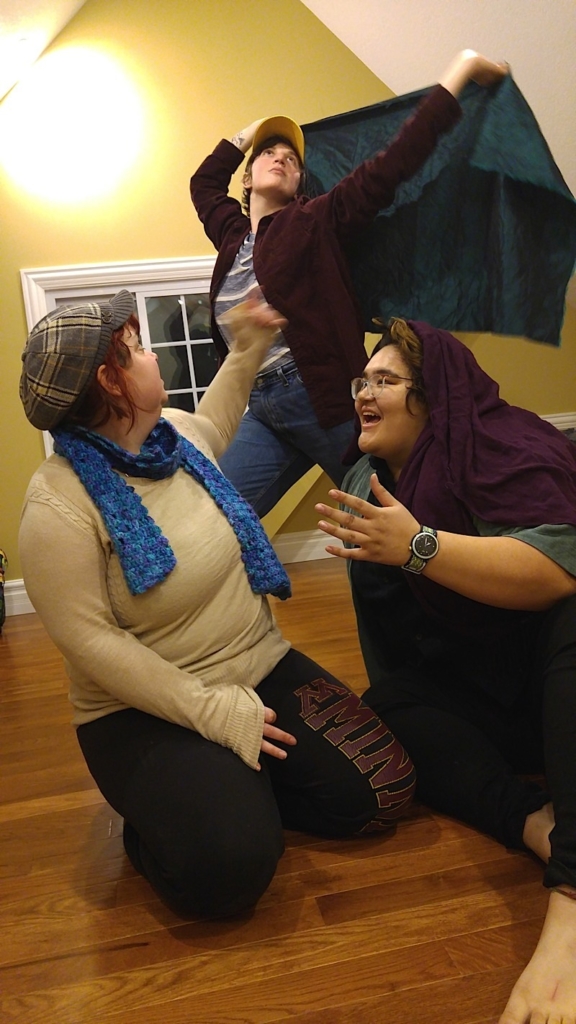 Gadfly Theatre has staged a lyrically surreal production of an imaginative stream-of-consciousness play by Sami Pfeffer at Phoenix Theatre. The Children’s Play fascinates as four actors play metaphorical figures—a prince, a rooster, a girl, a bear, and others—in a minimalist reality where you never know what might happen next.

What unifies the script is a general view that people are thrown to lives wherein they serve unhappily as cogs in a mechanical system with conveyor belts and psychologically enforced roles and functions. This authoritarian scheme oppresses the person, hence, it suppresses people’s true selves. In contrast, fluid actor movement and waving of fabric signifies ocean waves, the flowing opposite of the rigid realm of industrial tyranny. Furthermore, candle ritual is used as a way of entering a psychic portal beyond the mundane conformity of an hierarchic world hell-bent on defining us against our inner nature.

A seamless acting ensemble—Addison Sharpe, Ally Rae Van Siclen, Ming Hsu, and Ari Shapiro—interacts brilliantly with lines of dialogue that are often abstract. Magically, the cast makes Pfeffer’s language connect and breathe with life. Director Immanuel Elliott artfully helms the production with the spirit of Dadaism and surrealism. The effect is downright masterful.

Producer Cassandra Snow rightly says “The Children’s Play is an important piece about trans identity, trauma, and mental illness with all trans or genderqueer cast and crew. It’s also weird in all the right ways and has been really fun to put together. The director, Immanuel Elliott, has been using a lot of movement and describing the piece as a play meets a living painting as the cast moves in and out of the story like ocean waves.”