Lynn Musgrave Has Directed a Haunting “Farnsworth Invention” at TRP: The “Little Guy” vs. Corporate Espionage 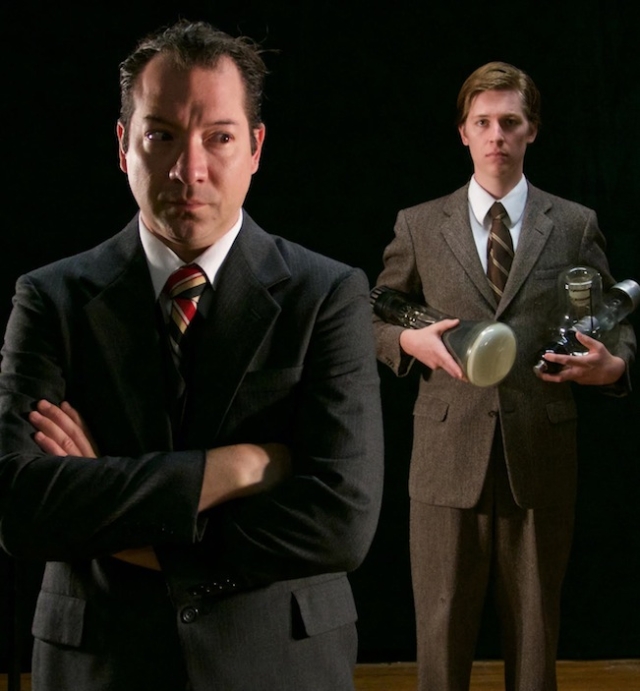 For several years, Lynn Musgrave has proved herself to be one of the Twin Cities’ great text-oriented stage directors. That’s a stage director who is primarily interested in revealing a play as it is written, unembellished by an agenda or a stylistic concept that’s not implicit to the play.

Her latest achievement is the haunting area premiere of Aaron Sorkin’s The Farnsworth Invention at Theatre in the Round. It is also one of the most minimalist productions of hers that I have seen over the decades. An almost barren stage (Michael Hoover, set designer) with tables and chairs that are whisked in and striking projections by Matthew Vichlach of Brave New Workshop fame, nicely enhance the action.

The spare approach serves the story well. Sorkin muses on disputed accounts on who actually invented television. The bulk of the action is set in 1929, the year of the Great Stock Market Crash which precipitated the Great Depression. It’s Philo T. Farnsworth (a luminous Pierce Huxtable) vs. David Sarnoff (a crackling Mark L. Mattison).

The former, an independently thinking genius from Utah and the latter, a groundbreaking Jewish immigrant who mastered Wall Street. (Sorkin was born to a Jewish family.)

There has been some controversy about the script over historical liberties taken, but it is a meditation on how wronged Farnsworth was by Sarnoff, and recollections from Sarnoff’s own admittedly hazy memory. Sorkin, in an admirable effort, makes some sense of the volatility that surrounded the corporate warfare that took place. Remember, too, that it was a time when records were not electronic and traceable by a mouse click.

The rest of the cast is uniformly brisk and vibrant. They take what in other hands might have been a wonky work and have made it soar along with the two superb leads. Indeed, Musgrave is in top form, which is wonderful to report.

Note on Aaron Sorkin: Many rightly deride Sorkin’s screenplay for The Social Network for its sexism, much of which was due to David Fincher’s directorial approach. But if you look at other work Sorkin has done, he is very interested in getting to the root of justices unrealized and injustices exposed. His masterpiece military drama, A Few Good Men, and most likely his upcoming film, Steve Jobs, exemplify his commitment to this. Sorkin, as a man of a Jewish background, cuts no slack for Sarnoff. It’s a clearly unsentimental representation of the man.

The Farnsworth Invention
Through Oct. 4
Theater in the Round Players, 245 Cedar Ave., Minneapolis
612-333-3010
www.theatreintheround.org