Lyn 65: Living the Dream on Lyndale 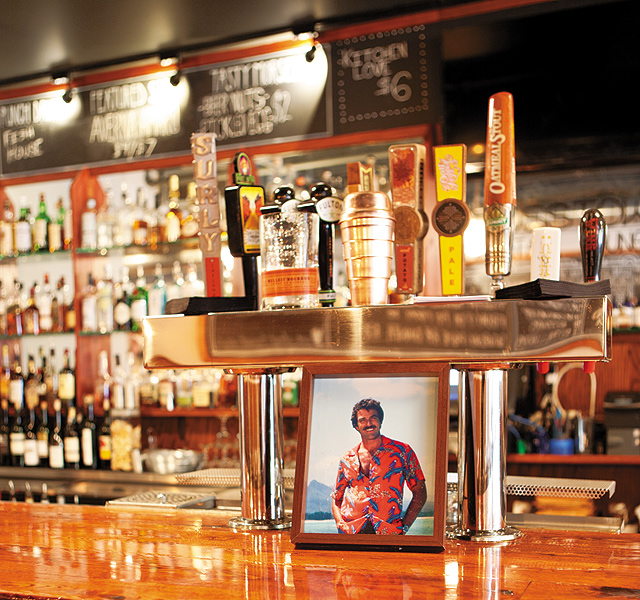 Living the dream sounds like lounging oceanside with a blender drink and a cabana boy near at hand. Actually living your dream is often a gnarly reality. There are blisters, sweat, and freak-outs when you wish no one was looking. There are bills that never stop coming. There are angry people. Happy people. There are so many people all depending on you and your dream for a piece of their happiness. Living the dream is brutal business and not for the faint of heart. It is exactly what the guys behind Lyn 65 are doing and they wouldn’t have it any other way.

Ben Rients, Jason Sawicki, and Travis Serbus are not above spending over 24 hours straight inside their new restaurant that’s drawing food fans to Richfield. Since the opening of Lyn 65, fans have gushed about the cocktails, praised the food, and proved they’re willing to wait in line and sample whatever the team deems worthy to serve them.

Rients and Sawicki met while working the line at Restaurant Alma. The restaurant is widely regarded as one of the best in Minneapolis. Chef and owner Alex Roberts has received numerous accolades including the prestigious James Beard Award for Best Chef Midwest. It was inside Alma’s kitchen where the two young chefs honed their appreciation for sourcing the best ingredients available and preparing them in ways that accentuate the flavors. This is where the dream was hatched. It was with the blessing of the entire restaurant crew and some unpaid consulting help from Chef Roberts that the duo began to piece together the rough idea that would become an independent restaurant with a tasting menu, well-chosen wine list, Neapolitan-style pizzas, and bar food. 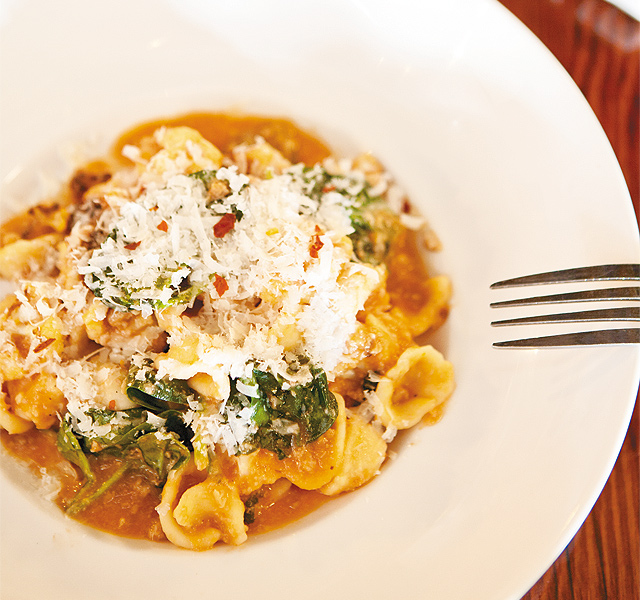 Orecchiette with Bolognese and cauliflower. Photo by Hubert Bonnet

Travis Serbus had read about the impending restaurant and reached out to Rients through Facebook with some ideas for a craft cocktail program and a partnership. Serbus has worked behind several bars around the Twin Cities including Barrio, coup d’état, and he was on the opening team for Butcher & the Boar’s beer garden.

The dishes we tried were rustic, but prepared with a refined technique. The Orrichiette dish, with wee little ear-shaped pasta, was prepared perfectly al dente with cauliflower and dressed in a meaty Bolognese sauce. It was rich and comforting, with a surprising lightness from the cauliflower and a bright note in the sauce.

Seared scallops were served with sweet potatoes prepared three different ways. The scallops were a beautiful quality with craggy, brown-topped crusts and succulent, quivery interiors. The sweet potatoes were made into crispy chips, a creamy sauce, and a satisfyingly toothsome roasted little wedge. The entire dish is splashed with an apple cider ponzu sauce. The plate was an autumnal balance of flavors. 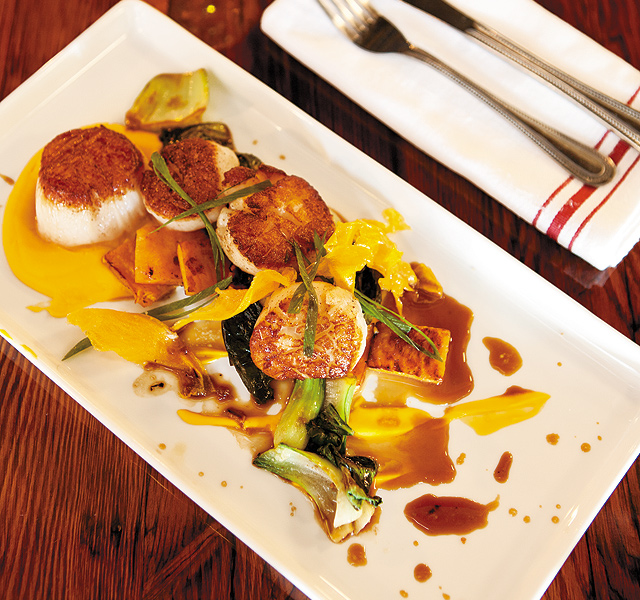 We happened to visit just as the menu was transitioning from the warm final days of summer into the colder reality we now reside in. A soup was a holdover; once chilled, now a warm butternut squash served with threads of plump, rosy-colored lobster meat.

The menu is often-evolving as the kitchen determines what their diners are seeking. At first, the crew was unsure what the Richfield diners would want to find in their neighborhood. As time goes on, they have discovered that it isn’t just the Richfield residents who come in, but people from nearby South Minneapolis, Tangletown, and even Edina are swarming. Located just a hop and a skip off the freeway, it’s an easy spot to get to even if you don’t reside in the 55423.

Those lucky enough to live nearby can likely better indulge in the cocktail list, though. Serbus’ drinks are the sort best enjoyed with a crew of friends ready to imbibe and share. The spirits are balanced with expertly built layers of flavors drawing on the seasons and spirits on hand. 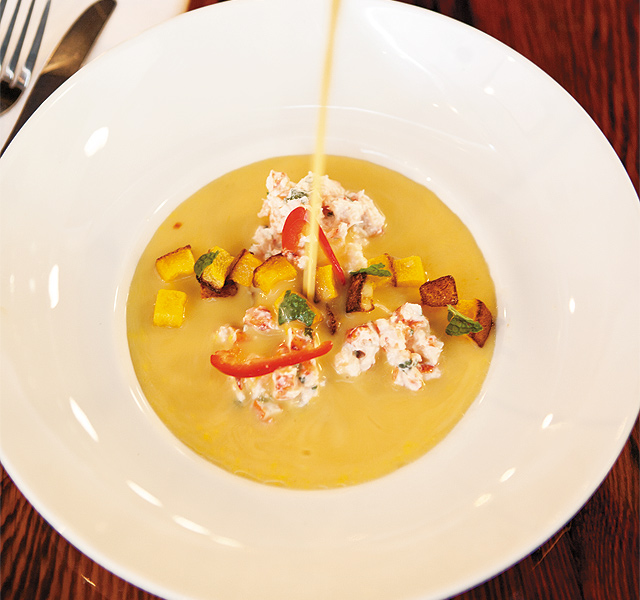 The Cut Cut Stab Kill is a frothy beauty made from a blood orange marmalade (that they make in-house), blood orangecello, livened up with lemon and mixed with Stab and Kill bourbon. He then drops in an egg and shakes the bejesus out of the thing, to create the resulting froth.

The best cocktail we sampled was the Bullet Proof of Bulleit Rye, apple cider, maple syrup, and cherry bark bitters. Serbus also serves a smoked option, with Laphroaig scotch that he swears tastes like drinking in a late summer bonfire. All these cocktails are priced at $9. (Try to beat that price at any of the fancy watering holes in the North Loop.)

There’s also a rotating special punch for as low as $4 a serving.

No matter what they’re serving, or how many nights they have to make it through with only a brief nap inside the back of the restaurant, this is the dream that they created. They live it every day and are thrilled to share that delicious, hard-fought dream with the world. 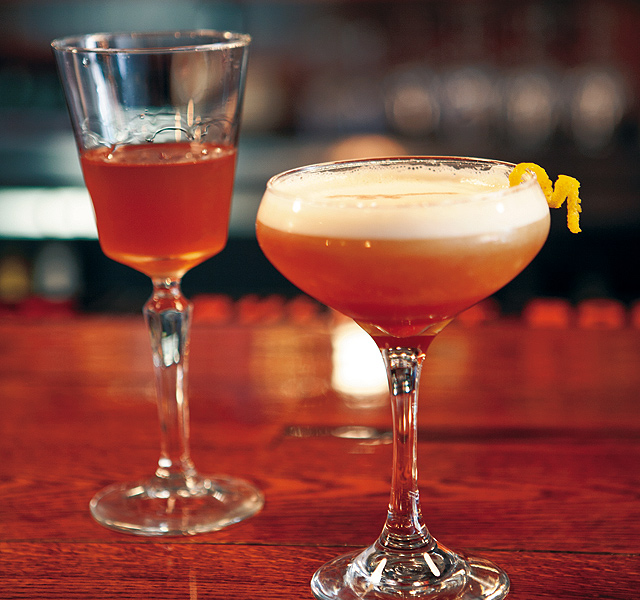