Sometimes you just wanna use those golden vacay days baking in the sand, never leaving the all-inclusive until it’s time for the airport taxi. But more and more, travelers are seeking to expand their minds and outlooks with experiences beyond the volleyball game — following a family tree, connecting Civil War battlefields, or honing cooking skills.

I’ve enjoyed that in the U.S., tracing the steps of Martin Luther King, for instance. This time, I’m off to follow the trail of his namesake, Martin Luther. Yes, the man who launched the Protestant Reformation in 1517. Next year will mark the 500th anniversary of that seismic event, and towns all along his trail are getting ready to celebrate. C’mon along! We’ll also be in the company of the great painter Lucas Cranach, Luther’s pal, and J.S. Bach, his big admirer.

Whatever your religious stance (and I’m a devout unbeliever), it’s impossible not to admire this philosophical pioneer: a monk who came to believe that man’s relationship to God, and road to heaven, required no priestly middlemen. Luther translated the Bible into the people’s spoken language, German, to make it accessible to all. He even wrote hymns so congregations could actively participate in a service (another first). And he got into a lot of trouble for all of the above.

I began the trail in Erfurt, founded in 742 and still spliced today with cobblestone streets below half-timbered buildings. Its charming Merchants’ Bridge of 1325 is lined with homes and shops à la Florence’s Ponte Vecchio (but this one is even more vecchio: older). Peek in at a puppet maker, a purveyor of ice cream, the antiques shops and cafés it houses as you make your way to the Cathedral, where Luther was ordained (home of a Cranach painting plus Jesus as a life-sized candlestick) aside St. Severus, its next-door rival. They’re separated by a vast staircase on which outdoor opera is performed. (I witnessed Tosca mysteriously ascend into heaven with a sword instead of landing in the Tiber.)

Near a statue of Luther as The Great Reformer stands the church where Bach’s parents married. But long before that, Luther had enrolled in the university here, where he studied law, as Dad decreed, until encountering a terrible thunderstorm which evoked a vow: “If I live, I promise to become a monk.” So, off next to the Augustinian Monastery where we can visit his humble, chilly cell and a replica of his Bible with handwritten notes in the margins.

Erfurt’s Anger Museum boasts an enchanting collection of apple-cheeked Medieval Madonnas — plucked eyebrows, coiffures above high foreheads — and altarpieces of alert saints. Roll back the clock even further as you explore the town’s Old Synagogue, traced from the 11th century. During a pogrom of 1349, Jews hid their precious gold beneath the floor, recently unearthed and displayed, along with early Bibles — one, of 1160, the size of a coffee table. By the 1860s, Jews banished, the building served as a dance hall.

No such celebrations under the bleak days of the German Democratic Republic (1949–89). A former Stasi prison today houses a museum depicting life (if you care to call it that) under the Soviets. These grim cells awaited many, after the dreaded middle-of-the-night knock on the door: “You’re coming with us to clarify some facts.” Today there was plenty of dancing again amid the rainbow banners of Christopher Street Day. 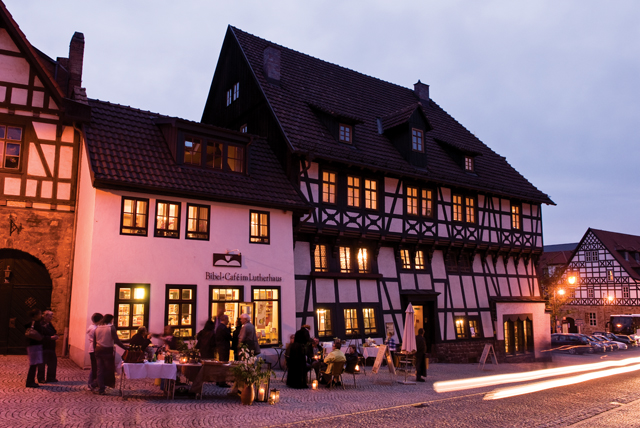 Follow Luther west to Weimar, where he lodged in the Franciscan monastery attached to City Palace, HQ of the short-lived Weimar Republic between world wars. Today it’s a hothouse of medieval paintings. “The Cranachs?” asks the attendant as I rush in. “Turn right” and there they are: a desolate Christ, betrayed; Caritas, a sensuous young woman; and portraits of Luther, like photographs enriched with understanding. Luther as an earnest youth with searching eyes; an older, pensive Luther; and the graying figure of later years.

Another Cranach — his masterpiece altar — resides in the church of St. Peter and Paul, featuring a crucifixion scene witnessed, in the corner, by John the Baptist. Wander over to Market Square to spot Cranach’s house and the former abode of J.S. Bach, marked with a plaque.

Weimar is a cauldron of creative talent. The homes of Goethe and Schiller — rival writers whose statues stand side-by-side — are open to tour, as is the abode of Franz Liszt and library of patroness Duchess Anna Amalia, whose voluptuous Rococo library houses Luther’s 1543 translation of the Bible. 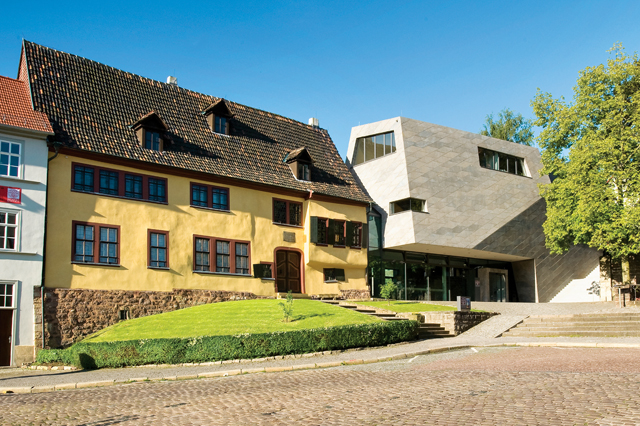 And the pulse goes on. Weimar is also the birthplace of the Bauhaus Movement in architecture and crafts founded by Walter Gropius in 1919 at Bauhaus University, later shut down by the Nazis, but today still alive with the work and spirit of artists Klee, Kandinsky, and Feininger in its sleek, Deco-like building. Tour, also, the Bauhaus Museum, showcasing objects destined for everyday life: tea sets to furniture, designed to be “attractive, functional, cheerful and cheap,” still glam today.

Not so gorgeous: the city’s Archive Building, fronted by rubble to represent the “crushed history” of the Gestapo’s former interrogation center here. The infamous Buchenwald camp nearby has recently become open to tour.

Hop the rails heading east to Gotha, first mentioned in a document signed by Charlemagne in 775, and today dominated by its signature castle, centerpiece of a vast, wooded garden-park. Friedenstein Castle, named Rock of Peace by its builder, arose in the middle of the Thirty Years’ War. As the White House of its day, it housed both working and living quarters, gamboling stylistically from Baroque to Rococo to Classicism in its 365 rooms — ballroom to bedchambers, library, an exquisite theater, and cache of precious paintings. The Herzogliches Museum across the street is home to many Cranachs (his house borders Market Square), including the oh-so-human portraits of Christ and Mary Magdalene and the famous “Gotha Lovers” — he, mesmerized by her beauty, she with modest eyes cast down.

Oh, but what about Luther? Yes, he paid frequent visits to preach here at the Augustinian monastery where he held office. In his will, he declared his wish to be buried in Gotha (didn’t happen).

“My dear town,” Luther called Eisenach. It’s here, at age 14, his parents sent him to earn his keep as a choirboy in St. George’s Church. In those days, the lads strolled, house-to-house, to literally sing for their supper. One kind family took him in. He lived in their half-timbered dwelling, now a museum called Lutherhaus — today not only a treasury of medieval art, but his boyhood bedchamber. Displays tell the story of “Luther and the Bible” in interactive form, explaining the whys and hows of translating the work into German.

Visit the Latin school he attended (as did his admirer, J.S. Bach) and St. George’s Church where, excommunicated and ostracized by now, he preached to standing room only crowds. (Bach was baptized here; four generations of his family occupied the organ bench, where Telemann and Pachelbel also played.) 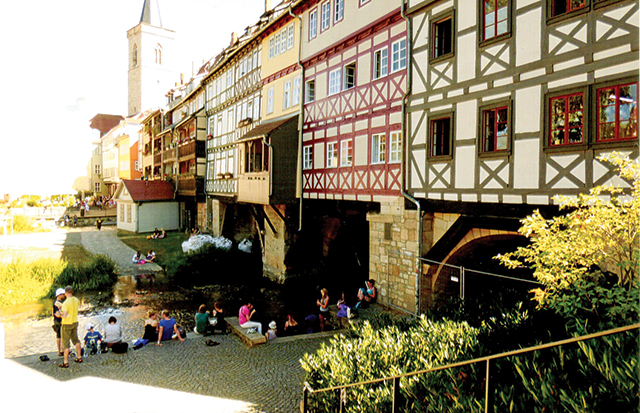 Above the town rises Wartburg Castle — perhaps Germany’s most iconic — where Luther was benignly incarcerated for a year while a hunted man. He used this time to translate the Bible. He also composed 30-some hymns — “A Mighty Fortress” the most famous — which Bach later adopted in his cantatas. Head to the castle’s art gallery, where — surprise — more Cranachs bloom, including portraits of Luther’s parents.

J.S. Bach was born here, and his early home is now the Bachhaus, a museum depicting his life and his music, exploring questions. What did he actually write? (Many conflicting editions.) What did he look like? (Only one authenticated portrait.) What is a fugue? Polyphony? Live concerts hourly and recordings in surround-sound.

To meet these heroes on their home turf, visit www.visit-thuringia.com and www.germany.travel.com. Making it easy, Condor Airlines flies nonstop from MSP to Frankfurt, featuring a Business Class menu that merits four stars. P.S. Our Minneapolis Institute of Art is hosting a traveling Reformation exhibition called “Here I Stand” through Jan. 15.