“Love, Cecil” – A Sumptuous Documentary About a Gay Aesthete and 20th Century Titan 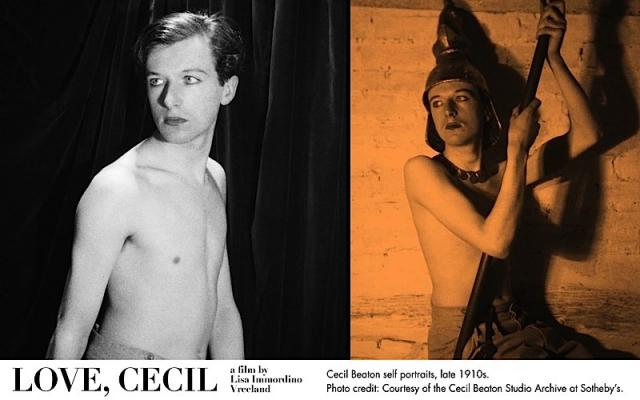 “I have never been in love with women, and I don’t think I ever shall be in the way that I have been in love with men. I am really a terrible, terrible homosexualist and try so hard not to be”.  – Cecil Beaton

Sir Cecil Beaton (1904-1980), fashion photographer and designer, was the ultimate aesthete. He loved beauty for beauty’s sake. Though his view would be attacked and trivialized today as “objectifying”, he was courageously true to his impulses, instincts, and spontaneity in a time when expression was rigidly restrained. Documentarian Lisa Immordino Vreeland has captured this resplendently in Love, Cecil. Interviews, sumptuous images from Beaton’s photos and designs, the subject’s own words read exquisitely by Rupert Everett, and Vreeland’s wise ability to weigh the man’s elegant snobbery against his extraordinary contribution to art and 20th century culture, result in a brilliantly realized film. You may be torn between adoring or scorning the man.

Beaton was born four years after the death of another consummate aesthete, Oscar Wilde, He was as forthright and brazen about his love of beauty as was Wilde. For example, in a public declaration contained in Love, Cecil, he states, “What a marvelous thing great physical beauty is. It’s nothing less than a living miracle. It’s not the result of achievement, skill, patience, or endeavor. It’s just a divine happening.” 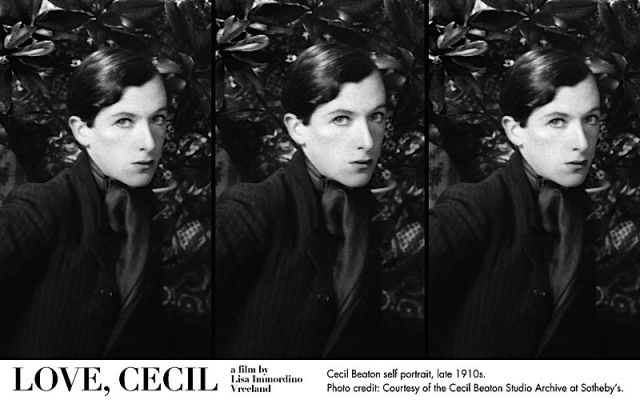 Cecil was born to an upper-middle class family and would dress his sisters up for fun. One day, as a child, he sneaked into his mother’s dressing table drawer and found himself fascinated with the rouge, powder, and mascara. However, when his father came upon him, Cecil had to lock himself in his room to escape paternal rage. Fortunately however, there seems to have been an understanding within the family that Cecil was different and still deserved to be loved.

In the early 20th century, because photography wasn’t taken seriously as a vocation, the field was wide open. For Beaton, the camera was a source of joy. He loved to photograph his sisters and his early crossgender photos are truly sensual. This spurred him swiftly onto gaining a reputation for his fetching photos of the young elite in London. 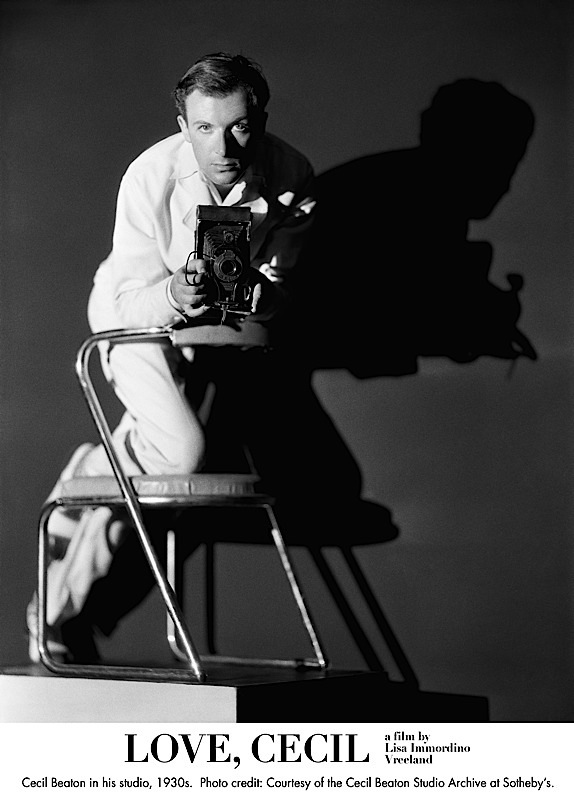 He soon went on to New York, where he made his mark at Vogue. Beaton made bold beauty comparisons between English and American women, claiming that the English had more beautiful necks and heads, as well as alabaster complexions and “cheeks like pink ice cream.” Americans, he said, were superior in wrists, ankles, feet and legs and their movement but “the English fail badly” in those areas.

Beaton’s view of photography was that the photographer must approach the subject being photographed with a point of view that is one’s own and be definite about it. Some of his models would include Gary Cooper, Douglas Fairbanks Jr., Judy Garland, and Greta Garbo, with whom he had a puzzling and intense friendship.

In the late 1930s, Beaton resigned from American Vogue because of allegations of anti-Semitism for a detail in a graphic he designed. He immediately regretted his artistic choice but damage was done. At the time, Nazi Germany had shifted into gear with its reign of terror against Jews. Americans were becoming increasingly perturbed that FDR had yet to enter the U.S. into war against Hitler. Not to mention the British who would soon be blitzed by German bombs.

A devastated Beaton returned to England, but good fortune struck when he was commanded to photograph the royal family. His riveting vision was just what they needed. So when the Blitz began in 1940, impetus was provided for him do what he did best. His images astounded the world and made clear to all the suffering England was enduring. Beaton’s wrenching photograph of a wounded little English girl made the cover of Life Magazine and is one of the most consequential images of the 20th century. It woke the world up to the horrendously threatening menace the Nazis were—the suffering in this precious child’s face is wrenching. Gay men should remember Beaton in this patriotic and profoundly empathic light, just as they should remember another gay Englishman of the time, Alan Turing, the man who was crucial in cracking intercepted code messages that led to the defeat the Germans. Sadly, Turing was never knighted. Beaton was.

It seems fitting that a stage revival of Wilde’s Lady Windemere Fan would launch a new period in Beaton’s life. It was exactly what London needed after the nightmare of war. The production is said to have exploded with Edwardian grandeur, understandably appreciated by war-weary Brits. (Thank God for gay aesthetes.) Moreover, New York and the US forgave him and he would go on to design for Broadway and win four Tony Awards for costume design.

However, it was Beaton’s sumptuous Oscar-winning designs for movie masterworks that immortalized him: Gigi and My Fair Lady. One of the most intriguing Love, Cecil interviews is with My Fair Lady director George Cukor in unsettled passive-aggressive form. These two gay men did not get along! And Cukor also won an Oscar for My Fair Lady. Just goes to show that great art doesn’t necessarily come out of a fully harmonious creative atmosphere. (Much points to the probability that Cukor also directed Gone With the Wind. His homosexuality may have been a component in why he was removed from the job.)

Also delicious, albeit in a favorable way, are interviews with Truman Capote and Diana Vreeland. However, if Beaton didn’t like you, watch out! He didn’t care how big you were. He despised Elizabeth Taylor, saying she was a combination of the worst of “American and of English tastes”. He thought her husband, Richard Burton, was rude and coarse and that both were common and vulgar. Perhaps worst of all was his comparison of Katherine Hepburn to “a dried up boot”. 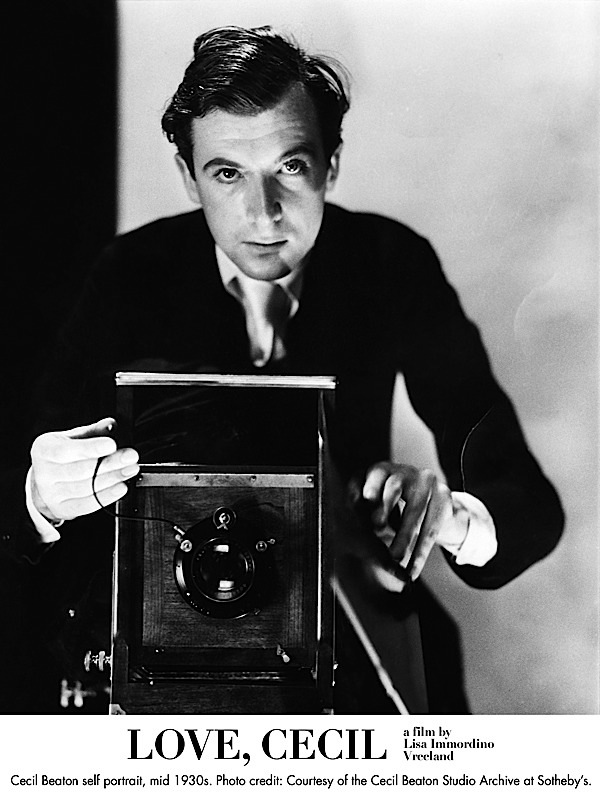 But the man admired with as much passion as he detested. For example: a young David Hockney’s love and ease for life. He spoke glowingly of Barbra Streisand, star of On A Clear Day You Can See Forever, Beaton’s last film costume design. Penelope Tree, icon of the Swinging Sixties, modeled for Beaton, and notes that he had a perception of young people he sensed would develop into something exceptional. Beaton, like all of us, aged but he refused to lag behind the times. His photos of Andy Warhol and Mick Jagger attest to that. Love, Cecil captures the maverick spirit of an irrepressibly creative man.