Louisville: Where Queer Is Dear 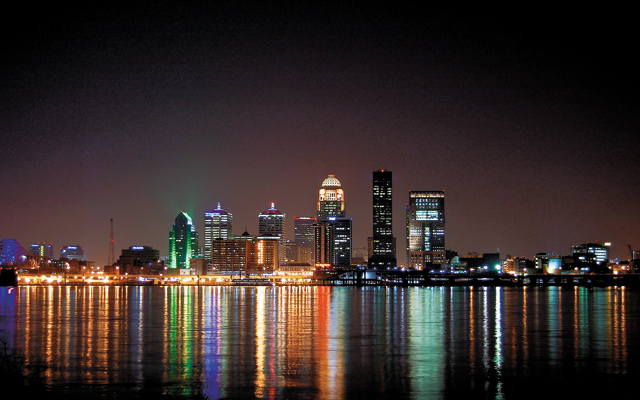 “I’m James, and I’ll be your God,” drawled the leader of Churchill Downs’ backside tour in honeyed southern tones.  Why not? For worshipers of horse racing, Louisville—the track’s home—has long been synonymous with heaven.

The city’s also the Holy See of Bourbon, with legendary distilleries dotting the bluegrass countryside, a new distillery smack-dab in the middle of Main Street with three more soon to follow, and an Urban Bourbon Trail saluting bars and cafes that carry upwards of 150 labels. The two unite on Derby Day, watching the race sipping a Mint Julep, as James, our god—er, guide, extolled.

Bourbon also spikes (pardon me) the city’s quirky arts scene, if you count the sculpture of Jesus in a Jim Beam bottle entitled “Holy Spirit” at the Kentucky Museum of Art and Craft, which also gives homage to its food culture via a party dress sewn of Dum Dum wrappers.

In a red state, Louisville is a welcome palette of blue: diverse, accepting, creative. Main Street’s Museum Row includes the gallery in the 21C Hotel, which makes our own Graves look like a Howard Johnson (five-foot pink penguins in the halls and Michelangelo’s supersized, full-frontal David on the sidewalk). The installation of fabric seagulls above its restaurant tables bears the title “What the Flock?”—a fact I noted while swooning over its cheese grits, easily the best in the galaxy. Oh, and at nearby Actors Theater, home of the renowned Humana Festival for New Plays (debuts by playwrights worldwide, including, in years past, our own Dominique Serrand and Kevin Kling) an über-bawdy, sublimely delicious presentation of Tom Jones involved a lot of likker, maybe closer to moonshine than Bourbon, but Louisville does that, too. Cafes like Hillbilly Tea not only serve moonshine, but moonshine By. The. Flight. along with Bourbon bread pudding, pulled pork on ’pone, and roadkill stew; also, liver pâté on bacon toast with basil-braised figs, proving even hillbillies subscribe to Saveur.

Anyone who aspires to be a distiller can take lessons (classes for mere enthusiasts, too) at Distilled Spirits Epicenter’s Moonshine University. Those (read: everyone) eager to learn how Bourbon’s made and the proper tasting method can tour the brand-new Evan Williams Distillery on Main Street—maker of the world’s second-highest seller, Heaven Hill—to sniff, swirl, swallow, and evaluate at the old-time bar. 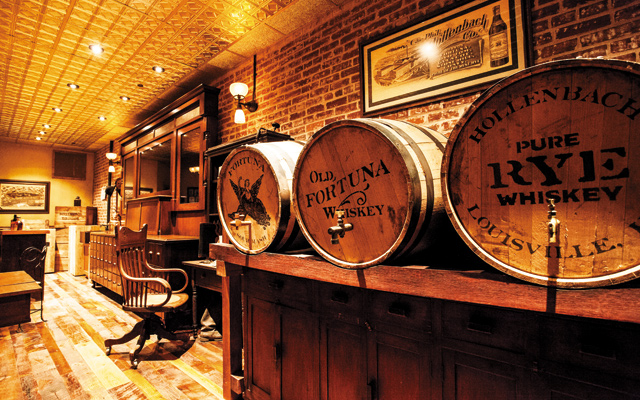 Bourbon—well, the barrels, anyway—lend themselves to micro-brewing soy sauce at Bourbon Barrel Foods (find their smoked seasonings at Kitchen Window), whose soy and Kentuckiyaki are in demand by the rock-star chefs of the land. Why, I asked proprietor Matt Jamie, is Southern food so hot right now? (A restaurant cannot open without pork belly on the menu, right?) The renaissance, says Matt, is fueled by three factors: “It’s comfort food, it’s easy, and it’s not expensive—no prime cuts of meat involved. The recipes are our history and heritage,” he underscores, instructing me to eat at Wagner’s, a short-order dive aside Churchill Downs since 1928. There, after watching the morning’s workout—so close to the track you can hear every thump, every snort—I ogled trainers and their groupies while shoveling biscuits and gravy into my mouth at Derby speed.

Bourbon lends itself to pork—in Louisville, as inseparable as ham and eggs or PBJ. To acclimatize your tastebuds, sign on for the new Louisville Food Tour (LouisvilleFoodTour.com), which walks foodies through Nu Lu which was, until recently, vagrants’ turf, but now reclaimed by forward galleries, indie boutiques, and chef-driven cafes. We stop at six of those artisanal kitchens for samplings with a side of backstory. Against the Grain, a brewpub, proffered pork belly on a stick with Kentucky sorghum, atop white bean purée with cornbread crumbles and a glass of Citra Ass Down Ale.

At Wiltshire, Chef John Exon, who  cooks for eight tables, explains, “My food is very personal—lots of confits and braises,” like the pork belly he plates with fried rice and kimchee. Le Coup, a classic French bistro of 42 seats, is where Chef Bobby Bergman slow-cooks his pork belly for a week, then bakes it three more days “so the fat can penetrate.” (Thanks for sharing.) His “lard de maison” is a fancy name for pork belly with sweet potatoes, and it’s yummy. So is a signature salad of Bourbon pecans and blue-cheese ice cream, which we savored with a sip of his Versailles cocktail: Bourbon, ginger liqueur, sweet vermouth, and lemon. Rye, its neighbor, caused me to swoon at the mere sight of pork belly toast on the menu. Nearby, Decca (vintage vinyl for sale upstairs and live music below) offers a wood-grilled pork chop, but I held out for even humbler fare: braised beef cheek over cavatelli noodles showered with buttermilk ricotta; a Parmesan risotto centered with an ultra-fresh farm egg; and shrimp atop polenta, just a fancy name for luscious grits. The Garage Bar—just as anti-schmancy as it sounds—scores with a ham bar: tastings of four pig producers, as well as pork meatballs and pancetta flavoring its brick-oven pizzas. 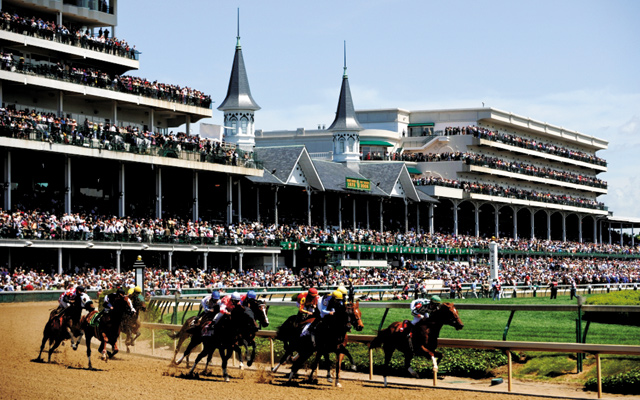 Okay, okay: Man cannot live by the underbelly alone. Time to spruce up for a visit to 610 Magnolia, where Chef Edward Lee (a James Beard kinda guy) provides a tasting menu of local viands-gone-elite. Our Wayzata-born server (“It just got too cold there”) whispered, as if offering cocaine on the sly, that the café had just scored a rare allotment of Pappy van Winkel Bourbon. Would I like to try it? (Is the Pope Catholic?)  Sublimely smooth, with just a drop of “branch” (water). It ushered in a starter of frog leg confit with watercress pistou and a 68-degree egg, while my pals whimpered over langoustines with uni tongue (I didn’t know, either: a shellfish of sorts) and fingerlings with potato foam. Next, chestnut-ricotta agnolotti with chestnuts, pumpkin seeds, sage, and—huh?—banana.

My coffee-rubbed venison sported smoked sweet potatoes, while my pals’ pork loin saluted autumn with squash, sunchokes, and kale. While they enjoyed apple cake with butterscotch and thyme gelée, Granny Smith ice cream, and (!) bacon powder, I dared the foie gras sponge cake with fig purée, fig-balsamic ice cream, and sorrel. At Sunday brunch at the grande-dame Seelbach Hotel (F. Scott Fitzgerald and Al Capone both beat me to it), I feasted on oysters, lamb chops with artichokes, duck in mole sauce, and Bourbon bread pudding, along with an amber glass of Angel’s Envy, a foretaste of the next distillery to open downtown.

Seems like there’s a James Beard chef on every corner, but they’re not the only local heroes Louisville boasts. There’s the Slugger Museum (batter up!) and one devoted to hometown slugger, Muhammad Ali. Another homeboy gets his due in the town cemetery, where a yellow line on the pavement leads to the grave of its patron saint, KFC’s Col. Sanders. Visit www.gotolouisville.com and come hungry. 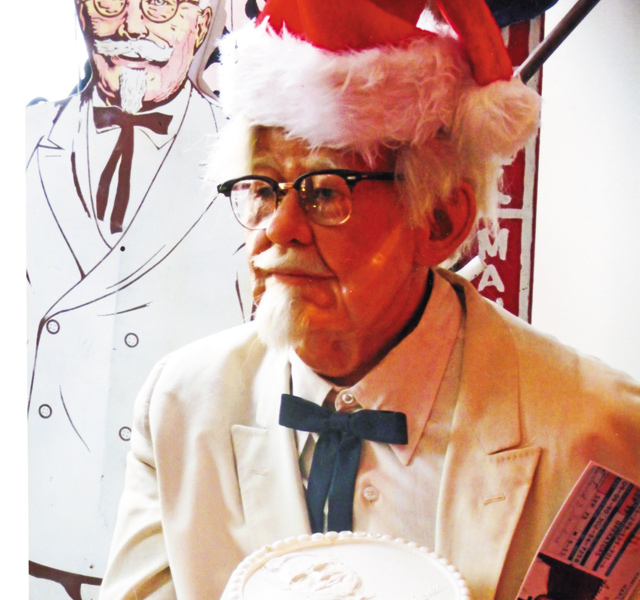 Col. Sanders, one of the town heroes. Photo by Carla Waldemar

Bars:
Any and every. Diversity is cherished in this town. Some outstanding hangouts:
The Connection—clearly the biggest, baddest, with performers and dancing
Tryangles: laidback—shoot pool, grab a drink
Teddy Bear’s: intimate, for the mature crowd
Nowhere Bar: newest on the party scene
Purrswaytions: lesbians rule
Magnolia: low-key and relaxing

Hotels:
21C: welcoming; annual Drag Queen Brunch in December
Vu:  by the owner of The Connection, a 4-acre compound (pool, spa) in a converted tobacco warehouse, slated to open in 2014