Lizzo, Sophia Eris, and Quinn Wilson loaded into the rehearsal space around noon, surviving on the adrenaline of an impossibly busy weekend. They had just driven hours from Duluth, having performed late the night before, and we were expected to arrive on-site for the University of Minnesota’s Spring Jam in Minneapolis at 3:00. Despite the pressure of the day’s tight schedule, Lizzo appeared as relaxed and radiant as ever. As Lizzo shared, this hustle isn’t new to her. “I feel like, I always kinda did too much. In high school I had to take every AP class and had to be in every extracurricular activity. My mom always said I tried to bite off more than I could chew. I realized when I got older, in this career, I had been built for it.” 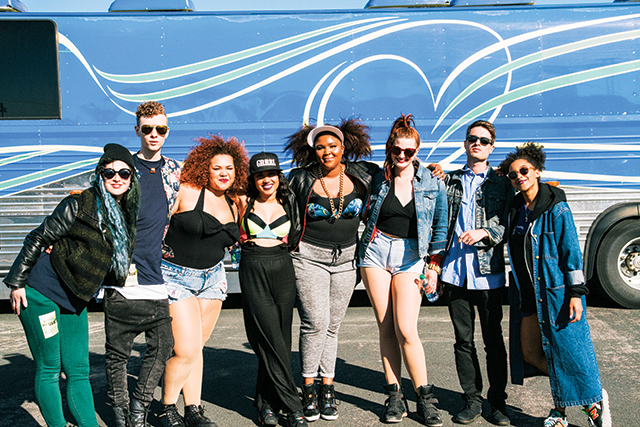 It’s been a whirlwind of a year for Lizzo, a year that’s had her opening tours for Sleater Kinney and Har Mar Superstar, performing on David Letterman, and recording collaborations with Clean Bandit, Bastille, Prince, and 3rdeyegirl. This, in addition to a grip of her own headlining performances, and the ubiquitous success of the “Batches & Cookies” single, has propelled Lizzo into the spotlight. She states, “Batches & Cookies” is one of those artistic phenomena that just reached people. I don’t know what I did to make that happen, but I’m glad it did, because I love that song. I think that because we poured so much happiness, love, and energy into the music video…it’s a huge part of why people gravitate to the song.”

Filmed in 2013 on the cusp of change, the “Batches & Cookies” video shows Lizzo and Sophia Eris dancing through a gay marriage protest on the steps of Capitol Hill. Lizzo has never been one to shy away from political issues and her affinity to the GLBTQ community is apparent in everything from her music videos to the team that she surrounds herself with. In speaking about her musical collaborators, Grrrl Prty bandmate Shannon Blowtorch was one of the first in mind, “Shannon Blowtorch is amazing. We work out together. She gives me the strength to go to the gym, a super positive and helpful human being. She’s an active member of the GLBTQ community in Minneapolis and she actually educated me a lot. I was super proud and excited to perform in Pride a couple years ago and I’m super excited to be in town for Pride this year. Now some of my closest friends and some of my strongest collaborators are in the GLBTQ family.”

Lizzo’s brilliance is indicated not only by her fanbase, but also by the support of her music industry peers. As she put it, “I feel like I’ve been so blessed to play in front of so many different people’s audiences, so many broad audiences.” The fact that Lizzo has opened for Sleater Kinney, Chvrches, Marijuana Death Squads, Har Mar Superstar, Pizza Underground, and Clean Bandit, speaks volumes to her camaraderie with artists operating at a high level of excellence. This summer, in addition to a busy festival tour of her own, Lizzo will be opening for Kentucky-based rock band, My Morning Jacket, on a leg of their North American tour. An excited Lizzo shared, “I just remember my manager was like, ‘So…Jim James from My Morning Jacket is a big hip-hop fan.’ I was excited because I remember seeing Jim James at First Avenue a few years ago. It sounded really rock and really gospel to me, like he was taking us to church a little bit. I like that, and I like doing that when I perform live, so I’m super excited to perform in front of their audience.” 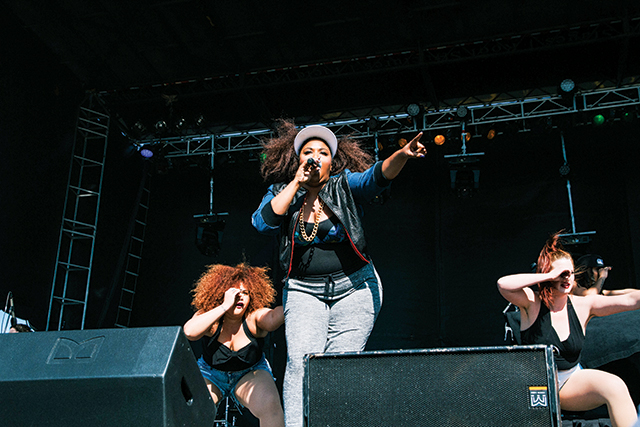 Lizzo is always quick to credit and appreciate the village of dynamic individuals that have helped shape and grow her artistry, “Grrrl Prty is like a family. We’re meeting up tomorrow to make music. It’s a great support system. I work with Manchita, Sophia Eris, Quinn, and Shannon Blowtorch. They’re all amazing human beings, and they all contribute a lot to the local scene.” Grrrl Prty is not even the first of a long legacy of collaborations that have developed Lizzo into the seasoned artist she is today.

It’s not easy to consolidate Lizzo’s relationship with music into a short history, but an attempt would look something like this: Describing herself as “one-part Detroit, one-part Houston,” Lizzo grew up immersed in gospel music. A musical family encouraged her in the pursuit of the flute, in which she achieved great excellence, getting her a scholarship to the University of Houston. Finding her voice in rock and rap, Lizzo spent her teens and early twenties moving through girl groups like the Cornrow Clique, I.N.I.T.I.A.L.S., The Clerb, and the Chalice, and progressive rock groups like Ellipsis and Lizzo & The Larva Ink. At one point in time, Lizzo could boast involvement with eleven musical acts. These experiences have been undoubtedly formative to Lizzo’s sound and given an insatiable bite to her abilities as a performer and a businesswoman. “You know, your voice changes throughout life. My voice has changed again. I’m just always excited to share a new level in my voice.” Lizzo is back in the studio and recently incorporated three new songs into her tour set, and having had the privilege to hear a few of the demos off her new album, I can personally advocate that it’s some next level work. “The [new] album is about what I had to go through to love myself.” 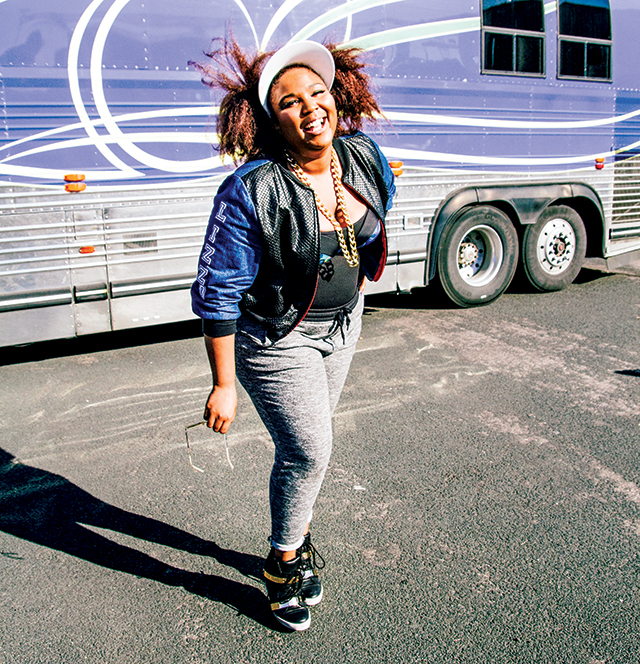 As a journalist, it would lack integrity on my part if I didn’t acknowledge my bias on matters related to this genre-defying songstress. As Lizzo’s dance choreographer, I work with her, Sophia Eris, and two backup dancers on movement for live concert events. While my position on her team gives me the privilege to see Lizzo up close and personal, her personality and ideologies read the same to me as they would to any of her fans. Lizzo is a truly authentic artist, and just as gracious in real life as she is on stage.

Lizzo appeared a bit nervous as we hid in a small hallway outside a large studio full of students. She was about to give a Q&A talk for the music majors at the performing arts high school in Hopkins. “I’m still learning how to talk with kids,” she smiled. The following hour was a home run, predictably so. It didn’t take her more than a few seconds to grasp their full attention, a challenge that many high school teachers would envy. Lately Lizzo has been making appearances at more youth-related events, like a Congressional Arts Reception featuring young visual artists and the Q&A with Main Street School of Performing Arts. To say Lizzo is enjoying the opportunity to give back is an understatement: “To feel that I’m accomplished enough to inspire people is one of the best feelings. Knowing that art does not end with creating, it is perpetuated by influence. I never wanted to make music just for me. I always wanted to be inspiring and intriguing to somebody and I think that gives the art more heart. It’s not just a vain tool for self expression, it’s a piece of yourself that someone can take and grow with.”

You can catch Lizzo performing live with My Morning Jacket at Northrop Auditorium on June 27th and at the Eaux Claires Music Festival on July 17th.