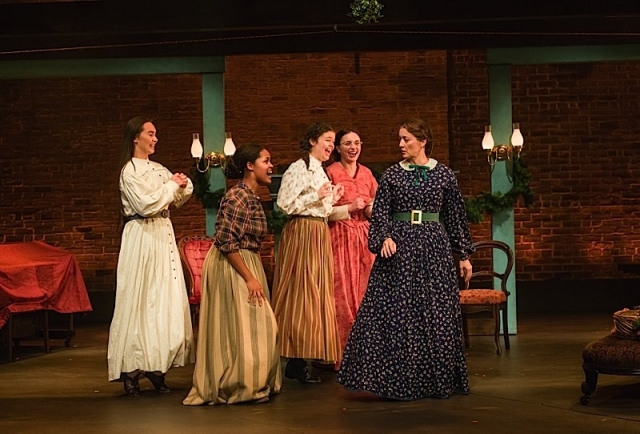 Louisa May Alcott’s Little Women endures as the inspirational story of the March family during the Civil War. For 150 years, the novel has been read around the world and has been adapted into several stage and film adaptations. The new one by playwright Kate Hamill is largely respectful of the original work and the Jungle Theater’s colorblind casting works well.

The entire cast embodies the historical period vividly with standout performances by Christina Baldwin as Marmee, the mother, and a touching Isabell Star LaBlanc as the sensitive Beth, whose preoccupation with mortality is a potent reminder that in previous centuries the specter of death was always hovering. Shorter life spans, sudden disease, medications that were not as effective as those of later times, and in so many cases, great travel distances to obtain medical care, made survival more difficult by and large.

Michael Menge boisterously moves the action along in a charming lead performance as the discontented daughter Jo, who dreams of being a writer. This character is one of the major tomboys of 19th century literature and the energetic Menge serves that well. However, the character of the March father, wounded in the war, though played convincingly by Tyson Forbes, has been essentially erased by Hamill with very few lines. Forbes does his best but director Sarah Rasmussen hasn’t blended him into the action so that there is at least some sense of progression. He just exists on stage in a sustained single level of anguish.

Hamill has a clear sense of how the novel can work theatrically and her attention to Alcott’s language is capable, except for contemporary words and expressions that stick out such as the term “issues”, which the psychological influence of the past half century—a century after the War Between the States—has instilled; and the term “motivation” in the melodrama rehearsal sections. The phrase “what’s your motivation?” came out of the Method Acting movement begun in earnest at The Actors Studio after World War II, and is commonly snickered at by those familiar with postmodern theater. But unfortunately it takes us out of the otherwise satisfactorily crafted 19th century atmosphere of the script and production.

Another moment that rings false is when a cranky elderly aunt played by Wendy Lehr histrionically denounces that there never should have been a civil war and intones “Make the Union great again!”—clearly a nod to the present zeitgeist. The problem with this, aside from taking us out of the period, is that the Civil War was the bloodiest period of American history. To reduce it to an easy partisan laugh and to make the aunt such a nasty two-dimensional “old maid” stereotype trivializes that.

This is certainly not to say that no one should ever create a negative elderly person. For example Violet in Tracy Lett’s August: Osage County and the other Violet, Mrs. Violet Venable in Tennessee Williams’s Suddenly Last Summer, are indelible major roles that mirror the shadow side of human nature.

The atmosphere is enhanced by a Chelsea M. Warren’s lovely set and Americana costumes by Rebecca Bernstein. Though Robert Elhai’s ethereal music is contemporary, it is blended from the beginning with subtlety throughout. We’ve had almost a century of film music that is often not of the period of a given film’s setting. Over the decades audiences have come to accept that music supporting dramatic action on film doesn’t necessarily have to be of the time depicted. Elhai’s score doesn’t jar. It enlarges and honors the feelings evoked in the scenes.

Rasmussen uses the turntable set contrivance she implemented in her fine Sense and Sensibility production at the Guthrie a few years ago, but simply re-configuring the actors on stage could have subtracted the expense of such a device.