Life Doesn’t Just Get Better, It Gets Amazing 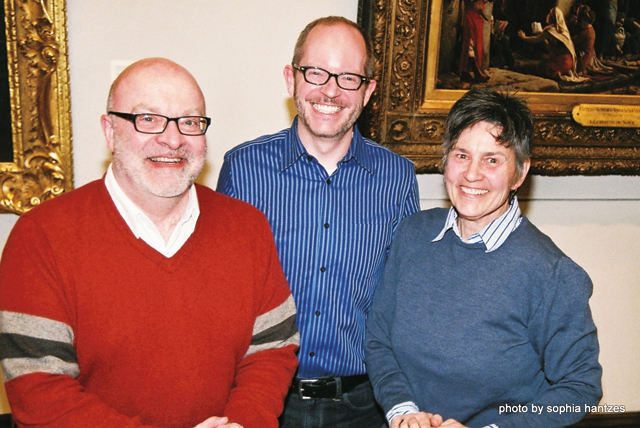 With an increase in school bullying and teenage suicide, many groups have come forth with their own message of how “It Gets Better.” Teens just need to push through these rough years knowing that someone, somewhere, loves them for who they are and life will get better eventually. The Twin Cities Gay Men’s Chorus (TCGMC) has responded by creating their spring concert It Gets Amazing.

This performance will be a two act production. The first act features Testimony, written by Wicked and Godspell composer Stephen Schwartz, which has been particularly challenging for the men of the Chorus. Testimony is based on letters written by children who contemplated suicide; the lyrics are the actual words they wrote. The tone changes midway, where now the men of the Chorus are singing lyrics of words written by kids who realized that life was worth living. The concert title comes from some of these lyrics: “life doesn’t just get better, it gets amazing and astounding.” Composed for the GLBT choral movement, Testimony weaves lyrics of despair and hope with beautiful music to create a profound piece of artistry. Schwartz has set the heartfelt words from the “It Gets Better” videos to music, weaving them into a breathtaking and emotional new masterpiece that speaks to anyone who has ever felt out of place.

In the second act, the Chorus proudly revisits Oliver Button is a Sissy, based on the 1979 children’s book of the same name by Tomie dePaola, which tells the heartwarming story about a boy who likes to sing and dance rather than engage in activities enjoyed by “normal” boys, such as playing sports. This simple story teaches powerful lessons about embracing differences, nurturing talent, and striving to achieve one’s dreams. TCGMC was one of a small number of choruses who had originally commissioned Oliver Button back in 2000. Bruce Johnson, one of the members of the Chorus, brought the program to a Chorus rehearsal retreat and shared the story with the members of the chorus at that time. The chorus fell in love with the story; everyone could relate to the story of Oliver on a personal level. TCGMC has not performed Oliver Button since that original time, and felt it was now time to revisit the story.

TCGMC was initially involved with a 2001 documentary titled Oliver Button is a Star produced by the Chorus, the book’s author, Dan Hunt, and John Scagliotti. This documentary not only featured the Chorus’ performance of Oliver Button, but also told the personal stories of four people who grew up being told that they couldn’t do the things that they wanted to do, or be who they wanted to be when they grew up. One of those stories was Ann Bancroft’s: a six year old with a learning disability who had a dream of exploring Antarctica. At the time it was unthinkable. How can that possibly be an appropriate thing for a girl? But Bancroft did it. Her story, and now through her Foundation, is all about giving girls the opportunity to be who they want to be.

Bancroft has signed on to narrate this revival performance of Oliver Button. “I am really excited about this opportunity,” Bancroft says. “It’s an honor to be with the Twin Cities Gay Men’s Chorus as we revisit Oliver Button together.”

The Chorus is just as excited to be working with her. “I am so delighted to work with Ann Bancroft,” said Dr. Ben Riggs, Artistic Director of TCGMC. “She is truly an inspiration and a role model for all young people to pursue their dreams.”

“Rehearsing Testimony week-in and week-out has also been an unexpectedly challenging experience,” said Riggs. “For some of our members the issue of bullying and intolerance struck extremely close to home; for others, it was the pain of past addictions, lost relationships, and depression. In every instance, I have watched our members share their struggles with the chorus community and find solace in our shared story.”

The Chorus’ executive director, Jeff Heine echoed these sentiments. “I joke with the guys in the Chorus that I have no emotions, I don’t cry or get too emotionally involved in our concerts,” he said. “And here I am crying at rehearsal the first time I hear the guys sing Testimony. It is an incredible piece of music and I am so proud of the guys for dedicating so much time and effort to master singing it for our audience.”

Heine and Riggs knew that the concert would be emotional for the audience, but they did not expect the depth of emotions members of the Chorus were dealing with during rehearsals. “There will be a moment in the concert where we will remember some of our younger brothers and sisters who took their own lives – many of them less than an hour’s drive from where we will be performing,” Heine said. “The two songs we sing during this tribute (“Bring Him Home” from Les Miserables and Eric Whitacre’s The Seal Lullaby) are powerful, moving pieces on their own and gain a deeper emotional resonance in this context.”

Heine says that when TCGMC originally performed Oliver Button, they had no idea of the challenges people would be facing in schools today. “And we are not just talking about kids who identify as LGTBQ – any kid who is seen as “different” is subject to acts of cruelty,” he said. “So in some ways, you feel like nothing has changed since we first sang Oliver Button.” However, he mentions that this message is combined with personal stories from members of the Chorus who found what they were looking for – acceptance, belonging, a “safe place” where they could be themselves.

“It is our hope that at the end of the evening, our audience will leave with a message of inspiration and hope that life doesn’t just get better…it gets amazing” said Riggs. “We hope that they leave with a sense of wanting to do something to help our younger brothers and sisters, who are out there just wanting to be accepted for who they are.”

When TCGMC began preparing for this concert, it was discussed that Oliver Button is perhaps outdated with an unrealistic ending for the present day. “We would argue the opposite: the message of the story is even more relevant,” said Heine. “The issues we face today – bullying, teenage suicide, the freedom to marry – are challenges to the moral of the Oliver Button story: you can be anything you want to be at all. We still have a long way to go, and we hope that after you see It Gets Amazing you believe that we can get there, and maybe you will want to be a part of the journey that gets us there.”

It Gets Amazing will be performed at Ted Mann Concert Hall on the University of Minnesota campus Friday, April 5 and Saturday, April 6 at 8 p.m. Tickets are now on sale through U of M Tickets and Events.