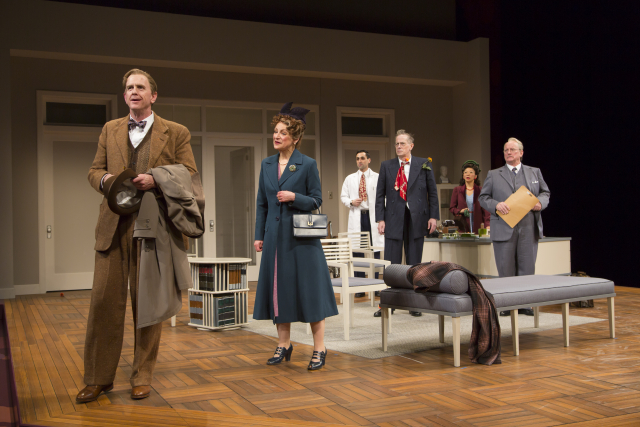 To this very day people are irked by Harvey by Mary Chase winning the 1945 Pulitzer Prize for Drama instead of Tennessee Williams’s The Glass Menagerie. Think of Terms of Endearment winning the 1983 Best Picture Oscar over The Dresser. Nonetheless, Harvey, has endured as a popular comedy for 70 years and the Guthrie’s current revival reminds us why that is.

Libby Appel has directed the Denver journalist’s screwball comedy classic with an enlightened eye toward how the various characters exist at varying levels of consciousness. It makes for a revelatory revival and is packed with laughs from start to finish. Some have rolled and will continue to roll their eyes at Chase’s basic caution that the “crazy” people are quite likely the authority figures in “normal” society and the wild cards inside and outside the asylum are the “sane” ones. But Chase’s script and Appel’s wonderful cast have us consider that, and frankly, it’s not necessarily an invalid concept.

Protagonist Elwood P. Dowd is a carefree guy of means who imbibes a bit too much and claims to have a best friend named Harvey who is with him most of the time. Harvey, however, is invisible. Better yet, he is a giant rabbit!

This is reason enough for his sister, Veta, with the assistance of her judgmental daughter, Myrtle Mae, to use their clout as family members to have Elwood committed to a sanitarium. It’s more about their money envy than it is concern for Elwood’s well-being. Unfortunately for them, the scheme backfires and works in Elwood’s favor. Veta becomes the one considered mentally ill and her brother further enhances his social status.

David Kelly’s Elwood has the fittingly breezy ease of Bob Hope. Nothing fazes him. Sally Wingert is perfectly dotty as Veta. Steve Hendrickson personifies the stuffy psychiatrist image of the day and reminds us that self-importance and powerful authority can be a hurtful combination. Tyson Forbes as chief sanitarium attendant pushes the character close to a point of being criminally abusive by today’s standards. This is a rather stunning choice as it is settled knowledge that the mentally ill were subjected to dreadful treatment in institutions in the 1940s. Forbes has this understanding lurking around the edges of his excellent performance.