Warning: This column contains material rated unsuitable for the following audiences: members of a punitive, anti-fun-loving sect; those on a Spartan diet; and any masochist who prefers suffering frostbite to vacationing in sunny Louisiana. 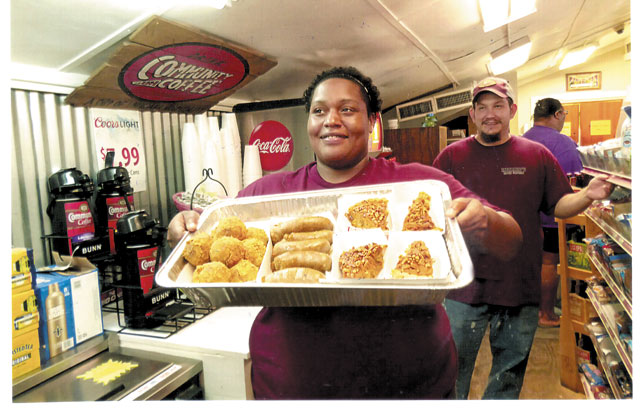 Those of you who prefer to “let the good times roll,” read on. Lafayette, the centerpiece of Louisiana’s Cajun country, welcomes you. It’s a city where a carry permit refers not to firearms, but cocktails, as you roam from shopping ops to outdoor music venues. It’s a place where healthy eating refers to crawfish, catfish, and anything else it’s remotely possible to fry in grease.

Plus boudin. If you’re unfamiliar with that member of the Cajun food group, tattoo the word on your arm as a quick reminder. It puts other sausages to shame. Boudin is basically pork trimmings mixed with rice and seasonings (every maker’s recipe differs), then stuffed into a casing to be boiled and enjoyed. It’s what’s for breakfast. And lunch and dinner. It’s what you bring to the office instead of donuts and what you serve at wedding receptions if you want anyone to come. An undocumented statistic claims that 80 percent of all boudin is consumed in the car. 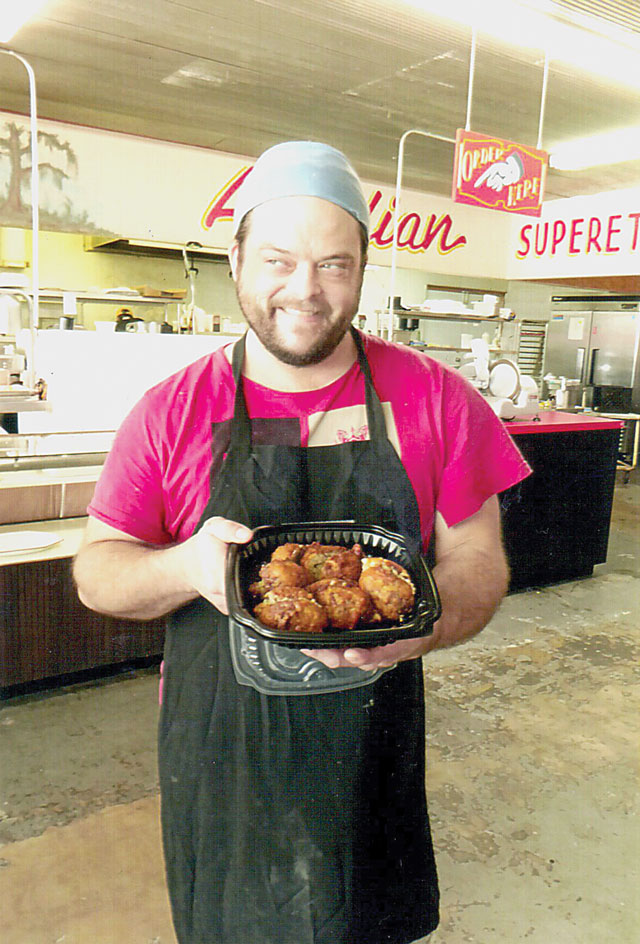 Lafayette hosts an annual October boudin cook-off. To enjoy it on the other 364 days of the year, follow the guidance of Bob Carriker, a U-Lafayette history professor who’s become a born-again boudin fanatic. He leads groups (and offers self-guide suggestions) on a foodie’s pilgrimage called the Boudin Trail: four stops at which to compare boudin links and balls served up on paper napkins and butcher paper (www.boudinlink.com).

Next up, Acadien Superette, a bare-bones grocery store where owner Tony Rodrigues, a devotee of tradition, offers his unique blend of pig shoulder and liver meat cooked in vegetable stock. He also features meatball-size boudin balls coated in his fried-chicken batter. Cop cars parked at the curb attest to its quality. 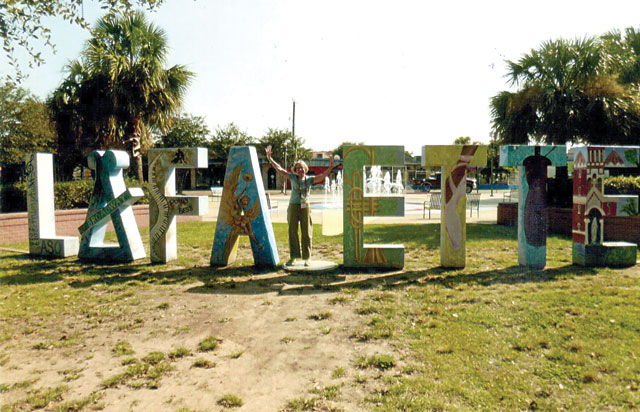 Earl’s Cajun Grocery, around for 40 years, favors a non-traditional recipe that features paprika. Owner Tony Como also has invented a few more ways to enjoy the delicacy. He stuffs it in a boneless chicken; fabricates boudin egg rolls, and offers a seafood variation.

Driving into the countryside, we discover another tasty variation at Menard’s Cajun Grocery, which sells more boudin than any place in Scott County, “the boudin capitol of the universe.” Cars start parking here early-early in the morning, “and when we run out, people are happy to wait,” states manager Alicia Page, whose mom is chief cook. She’s perfected boudin balls stuffed with pepperjack cheese as well as a stunning sweet potato pie containing boudin and topped with pecans.

Marie Ducote, a former teacher herself, now runs Cajun Food Tours (www.CajunFoodTours.com), making six stops in her little bus, wherein the words “Allons manger!”—Let’s eat!—are our signal to gobble up. Among the venues she rotates, our first stop is Cajun Market Donuts, where we feasted on (what else?) boudin-stuffed kolaches. “Boudin,” says Marie,” features the less-desirable parts of pig plus the Holy Trinity”—onion, celery, and sweet green peppers. 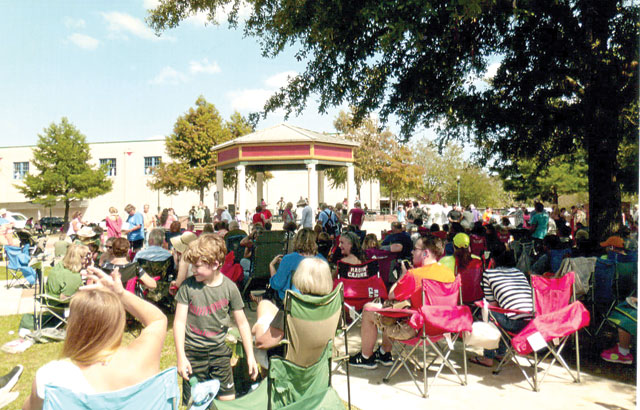 During Mardi Gras (Lafayette boasts the second-biggest celebration in the state), this café stuffs boudin into the traditional King’s Cake, along with cane syrup and pig cracklins atop. And it was our friend Bob Cariker who came up with the concept.

In nearby Youngville, Marie introduces us to Nunu’s Fresh Market, where we feast on boudin—Nunu’s won first place in the boudin cook-off—plus cracklins, plus Cajun sausage, plus chicken patties. (Overheard at the meat counter by a patron of gas-station boudin, sold out of ice chests: “Raccoon boudin? I won’t touch it.” Picky, picky.) 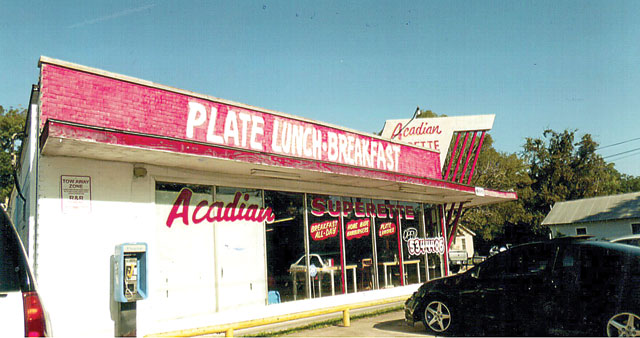 Acadian Superette on the Boudin Trail

At our next stop, Hooked Up Bar & Grill, we sampled tender fried catfish and $1 Margaritas in a go-cup.  Then, while at Fezzo’s, we watched oysters on the half-shell being grilled with cheese and bacon toppings, which we soon ingested, along with homemade tartar sauce and a side of fried alligator. (Earlier, we toured the campus of U-Lafayette, which includes a bit of swamp where we spied the grinning critters.)

At La Cuisine de Maman (Mom’s cooking) in Vermilion Village, we tasted a superior gumbo composed of dark roux (thickening) with chicken and sausage ladled over rice. Stick around to tour the site’s recreated village with homes dating from 1750 onward: both Cajun homesteads and Creole cottages. Boys sleep in the garconniere upstairs, reached by an outside staircase, while girls’ slumber in a room reached only from their parents’ bedroom, to safeguard their honor. The homes feature demonstrators of crafts, such as woodcarving and quilting, along with a banjo-strumming Cajun singer. 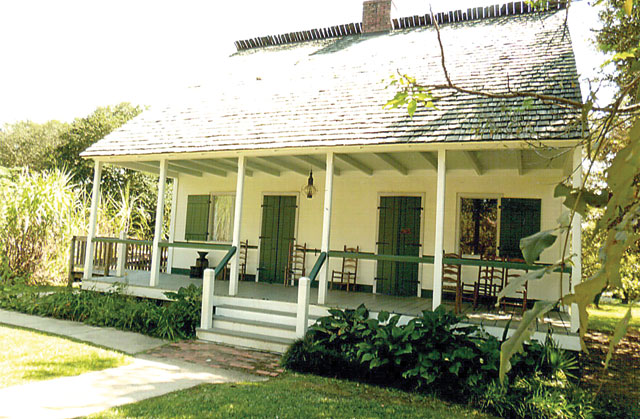 Marie’s final stop is Papa T’s, to sample what she declares is the town’s best bread pudding. No arguments from us. It’s slathered in pecan praline sauce. “I don’t get too many weight watchers in here,” allowed Papa.

Neither does Bordon’s, the national dairy company’s only remaining ice cream shop. Nor, perhaps, does Blue Dog, a supper club featuring the famed work of artist-owner George Rodrigue. Starters include smoked duck quesadillas; andouille sausage; and crab cakes sublime. On to entrees, where an order of Half and Half brought me both crawfish etouffee and fried crawfish tails with maque chou (creamed corn, only better).

To soothe your envy, visit www.LafayetteTravel.com.