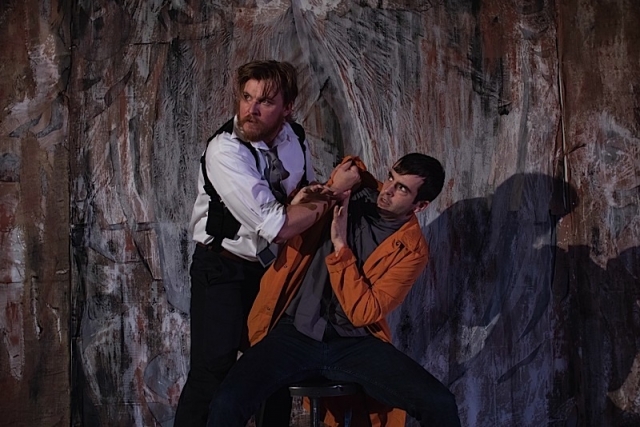 Martin McDonagh has an instinct for squeezing triggers in the emotional minefield of criminal violence. What makes the writer’s 2004 Olivier winner for Best New Play, The Pillowman, especially transgressive is that the violence it relates is that inflicted on young children by adults. Rich Remedios has directed a disturbing production for Theatre Coup d’Etat at SpringHouse Ministry Center that searingly penetrates the unconscious of the characters, made all the more fascinating because the land where it happens circumscribes how citizens are expected and programmed to think.

The setting is an interrogation chamber in an unspecified totalitarian state. A hooded young man named Katurian (Corey DiNardo) is rustled in to make an account for gory stories he has written about the sadistic physical abuse of children. The justification for his arrest is that crime has been committed uncannily mirroring what Katurian has described in his fiction. This prompts authorities to speculate just how fictitious or not his storytelling actually is. McDonagh sets us up right away for the fine line between free speech and expression v. artistic work that could incite someone to violence. One of many layers in this notable play.

Over the past few years, DiNardo has given fine performances in We Won’t Pay! We Won’t Pay! for Candid Theater and Awake and Sing! for Artistry. However, The Pillowman gives him a chance to shine and be assured, this young actor absolutely glistens. He embodies a role that most will be disgusted by because of the fixation on child abuse at its most creatively gruesome. Yet DiNardo makes us acutely aware that Katurian is the possible victim of assumptions in a regime where kangaroo courts decide whether a person is guilty or not. Dark shades of Stalinism: the set-up against this prisoner is clearly insidious, no matter how you feel about him.

Moreover, it raises the question that if he is convicted for something he is actually not guilty of or falsely implicated in a crime of child torture, then would that not create a precedent for convicting someone who is not guilty? Such precedents are quite useful for dictatorships, failed states and narcostates where rule of law is nonexistent.

Amidst the teasing and taunting threats and the mind games Katurian is pummeled with, DiNardo bravely elicits a deep sense of vulnerability in a character shamed, bedazzled, bewildered, and belittled from start to finish. That said, we can’t help but wonder if he shares some sort of culpability in the crime. It’s tempting for the audience to jump the gun and convict him in their minds before all the information is made known.

The two interrogators bring to mind the controversies of the post 9/11 period when impassioned discussions were dividing the West about torture and extraordinary rendition. Not to mention the atrocities enacted in the Balkans in the previous decade. In this sense, McDonagh captures the zeitgeist of that period. The playwright, thanks to his own life experience, also carries an inherent grasp of the issues around crime, punishment, and terrorism going back centuries to the abuses by the English crown against the Irish and, of course, the historic Catholic v. Protestant divide.

The sophisticated officer Tupolski is as terrifying a figure in the production and play as anyone. Deftly played with exquisite nuance and a command of the situation, Tyler Stamm recalls an early Roger Moore in the classic television series, The Saint, albeit without the any of the virtue of the suavely heroic Simon Templar. When Stamm steps on stage or off, it’s intriguing how you can feel the energy change. The presence of a person or absence can change an outcome. This actor’s subtlety serves the script splendidly.

James Napoleon Stone is a jackhammer powerhouse as his opposite, the “hard cop”, Ariel. His is a portrayal of dogged obsession that places no value whatsoever of innocence until proven guilty. Ariel rationalizes that even if he is wrong, his fanaticism against child abuse will send a message of harshly enforced zero-tolerance to the society at large. Even smile at a little child with his or her puppy and you might just get whisked away and who knows: chemical castration. Yes. Ariel is that far gone. But you may well have known or even know men and women like him.

That said, Tupolski is every bit as unjust, but he has a way of seeming reasonable. Where Tupolski has command of himself and command of the room, Ariel has little control of his inner demons. Stone’s vividly unsettling intensity fuels what can be described as a fittingly dangerous performance. To put it bluntly, he’s scary and you feel you are in the very presence of an actual torture about to be administered. 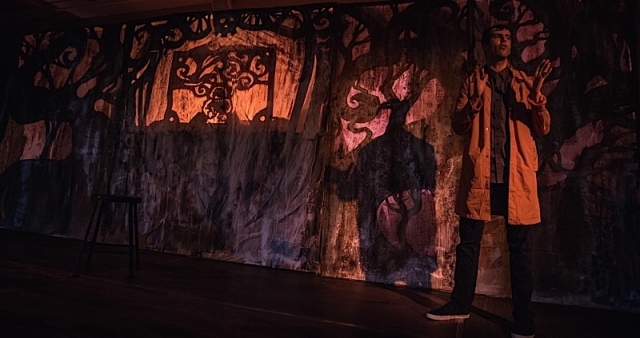 Song Kim is wonderful in the role of Michal, Katurian’s developmentally disabled brother who has also been arrested and housed in a nearby space in the same building. Kim manifests childlike innocence. His performance is a reminder how the most psychologically vulnerable are the first to be carted off in a totalitarian state. In any society, functional or not, vulnerable adults and young children, of any race or gender, are the most susceptible to cruelty.

McDonagh astutely embeds an element in the Michal thread, which Remedios discerns. It is a given anymore (which is a good thing generally) that those accused of pedophilia and other child abuse may well be falsely accused. Sometimes as a form of retaliation. One of the victories, if you will, of the Sexual Revolution, is that a greater number of people among the population instinctively comprehend this. Obviously, the authoritarian regime in The Pillowman never got this memo.

Yet for all the crazed outrage and disgust that the interrogators radiate about child crime, it’s revealing how little they see that a grown man who is genuinely childlike, genuinely vulnerable, with immutably childlike qualities, wouldn’t be vulnerable in the same way children are. Instead, for these cynical interrogators, Michal is a pawn for psychic manipulation. It’s clear that Tupolski has contempt for the disabled and its clear that Ariel is incapable of making distinctions between the able and disabled. As with any prisoner in a totalitarian state, no concepts of extenuating circumstances or due process are to be accorded anyone in the bulldozing power structure’s crosshairs.

The Pillowman is a play that one can easily say too much about and spoil its thriller potential, a potential which this production compellingly achieves. But suffice to say, it also contains a pleasingly whimsical turn by Meghan Gobler in the role of a young girl costumed vibrantly by Chelsea Wren Hanvy. Hanvy’s other costumes also tellingly suit the businesslike attitude that fascism has been known to reflect. 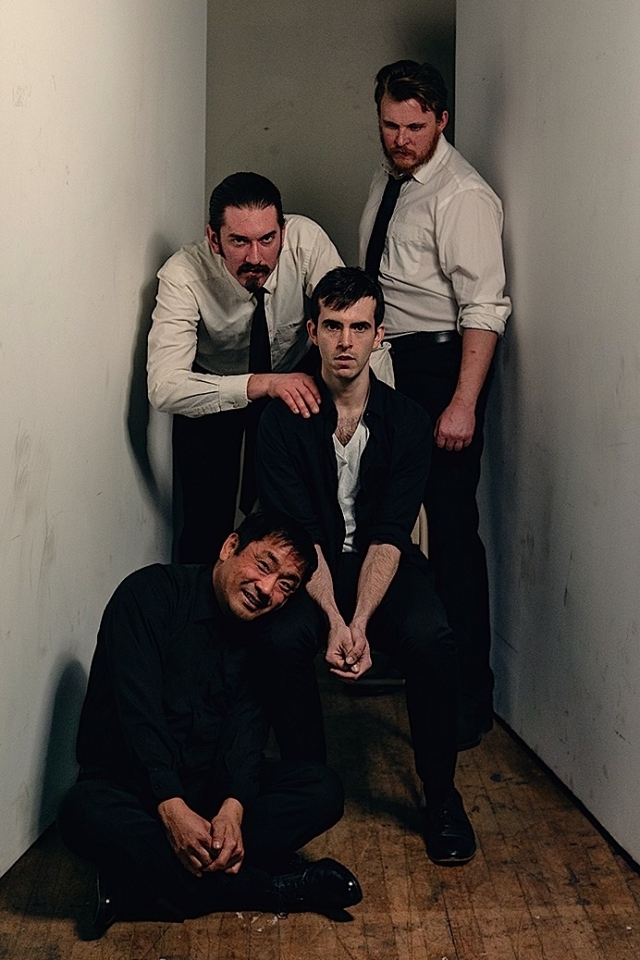 Stamm is also on the production’s design team and has rendered scenic painting reminiscent of a Rohrshach Test gone off the rails—and I say this in a favorable way. It might well reflect the phantoms of Tupolski’s subconscious: shadow puppet silhouettes perversely bring a children’s storybook approach to gruesome fantasies of ultraviolence. This spectral atmosphere is well served by Mark Kieffer’s lighting and Matt Clarke’s dissonant soundscape. The smaller space in the downstairs of SpringHouse makes it all the more overbearing— and that too I say in a positive way.

Productions of The Pillowman are tricky because its cascades of graphically violent descriptions and depraved threats against suspects can slip into either sensationalism or emotional detachment from the grisly subject matter. To make this play work, director and actors must be unflinching in their inquiry into human nature and not sit in politically correct judgement against characters, most of whom skirt on the edges of real malevolence.

Within this understanding, Remedios’ actors have really dug deeply to convey a numinous sense of how violent imagery can be encoded in our psyches as children through religious and other iconography and mutate into fixations and compulsions that we carry with us into the rest of our lives. It’s the sort of insight that Carl Jung and Erich Neumann apprehended. Again, these actors grasp human nature.

What The Pillowman is largely disinterested in (with an exception you’ll detect when you see it) is sexual criminality against children. What makes this remarkable is that there has long been and continues to be perfectly legitimate outrage about that. No reasonable or humane person disputes that. However, physical abuse of children that doesn’t fall into the sexual category far, far too often gets a pass because it’s not deemed as diabolical as physical abuse against children. McDonagh. perhaps unwittingly, counters this by writing what is surely a major work on the evils of physical child abuse. As graphic and disturbing as the play is, it’s a perspective that truly needs to be reckoned with. The Pillowman advances that inquiry.

Note: Theatre Coup d’Etat does not hand out programs. This is a practice I wish would stop. Going online after you’ve seen the show to find out who did what within in it, and bios on those artists, is a buzz kill. And unless you happen to be someone who is writing about the show, or an avid theatergoer and supporter, there’s less likelihood of an audience member going online—especially if they’re not particularly interested in the TC small theater scene. Programs reflect the accomplishments of both the theater and the theater scene, invaluable things for an art form beset with financial and political barriers. Especially smaller theaters. It takes away from the experience, as well as providing something audience members can hold in their hands and show to others. Not having paper programs is a concession to a world already digitalized beyond reason. It’s disproportionate to assert that it’s a waste of paper. It’s a tiny amount of paper in the scheme of things. And people like mementos!