On June 24, the Twin Cities once again will have the pleasure of welcoming whirlwind Leslie Jordan, aka Brother Boy (Sordid Lives), aka Beverley Leslie (Will & Grace), in a brand-new show that will make Pink the new Black. Jordan recently shared a few words with Lavender on his upcoming visit. Be sure not to miss the Real Thing, y’all! 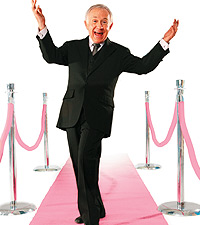 What will your upcoming evening at the Pantages Theatre involve? Will you be reading from your new book, My Trip Down the Pink Carpet?

The performance of My Trip Down the Pink Carpet is based on material from my book of the same name that came out June 3. We created the performance to take on a tour that would be different than a traditional book-signing tour. It’s a theatrical play that stands on its own, so it’s not a reading.

Is the play part of a benefit?

Yes, the benefit is me! I want to sell books, and make it to the best-seller list! Also, in the performance and in the book, I talk about organizations that are very important to me, and to which I donate my time and energy, and believe strongly that we all need to support: The Trevor Project, Stepping Stone in San Diego, Project Angel Food in Los Angeles.

Do you find that your comedic talents make it easier to get across some of your deeper messages—easier for your listeners to take them?

It’s always easier to receive messages through comedy, and I learned very early that it would be through making people laugh that I could communicate. It’s how I got through dodgeball in gym class! So, it’s through a lifetime of practice that I’ve been able to create my communication skills.

If you were in the position to have another jailhouse epiphany like the one described in the book, what star, were Robert Downey Jr. not available, would you pick to share it?

I don’t ever want to share a cell with anyone ever again. But if I had to, it would probably be Tennessee Williams, because his writing had such a profound effect on me. Then again, I wouldn’t mind sharing a cell with Patrick Dempsey!

I believe the day you last visited the Twin Cities, May 7, 2005, was declared Leslie Jordan Day. Has the glow remained? Is that why you’re returning to our midst?

The glow of Leslie Jordan Day will always be with me. I am looking forward to returning to the Twin Cities.

As you describe in your book, you went through hell coming to terms with being gay. What has been your most joyous moment?

Every day is joyous! I am sober for over 10 years now, and I celebrate each and every day!

What has been the most fulfilling part of your work?

Getting up on stage is certainly fulfilling, and hearing the reaction of the audience to my words. Also thrilling is seeing my work onscreen, though the audience is really what fills me. And being able to take my work, and have it contribute to the organizations I mentioned earlier, is always gratifying.

What do your readers/viewers tell you is a most “Leslie Jordan” moment for them? You talk about Del Shores and your role in his Sordid Lives. I hear it’s on its rocky way to a series—even more Brother Boy coming soon!

Will & Grace is certainly the most visible I’ve been, and I’m always having folks quote my lines from Sordid Lives to me. Just wait ’til the Sordid Lives series starts airing on Logo this July—I’m sure I’ll be hearing a lot more of Del Shores’s quotes thrown at me! I love Brother Boy, but it isn’t fun to have my whole body shaved! I don’t know how they scheduled everyone, but I shot all 10 of the episodes I’m in in two weeks. And everyone was scheduled in a block like that—genius! I wish all of television and film could be shot that way. The show looks like a million bucks.

After giving the Twin Cities audience an unforgettable Leslie Jordan evening, what message would you like to leave with them?

I’d like folks to leave my show knowing that there is an accepting God that loves you for who you are, just as you are. I know he loves me!

I’m wiped out—that’s all I can answer!

My Trip Down the Pink Carpet
Leslie Jordan
Simon & Schuster
$ 21.95