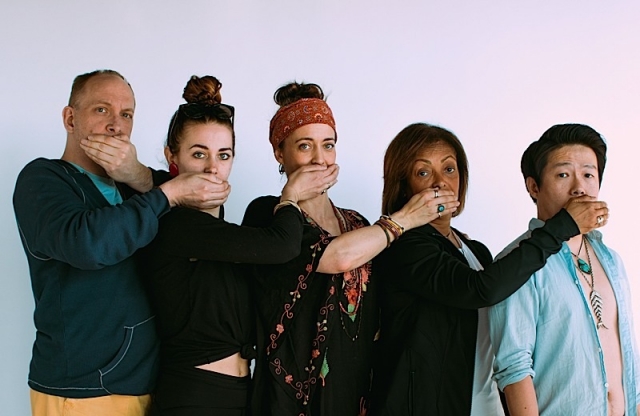 Small Mouth Sounds by Bess Wohl dramatizes a retreat where lost souls seek life’s purpose and emotional healing in a rural setting. The challenge and the wonder of this play is that the participants are not allowed to speak a word while there. Only a facilitator heard on loudspeaker has that freedom and delivers what some may call “words of wisdom” at points to give structure to the process the retreat is meant to facilitate.

The Jungle Theater production of Small Mouth Sounds has been directed with sensitivity, humor, and sense of the sacred by Lauren Keating. Therefore, the romantic relationship between two women whose inner turmoils emerge during the course of the play are given a lovely balance of lightness and gravity by actresses Faye M. Price and Christina Baldwin. As an audience member you will likely fill in your own blanks about what’s gone wrong between the two. To that end, both actresses relate characters who, against the odds, humbly and vulnerably want to work things out.

Scenes are played so that the audience is a voyeur into three cabins. The effect is like three altar pieces connoting how New Age belief systems such as that which Wohl depicts, have overtaken traditional religion in strategic parts of the country. One thinks of renowned meccas for this movement in the west/southwest: Sedona, Taos, Boulder, etc. Mina Kinukawa’s set matched seamlessly with Karin Olson’s lighting and Reid Rejsa’s sound design blend toward a soothing sylvan ambience.

If you’ve ever been to retreats or seminars such as this one, you’ve likely come across that proud guy who goes out of his way to show just how spiritual he already is: that cock-of-the-walk who quietly, yet passive-aggressively makes it known through his movement and vibration that he meditates better than anyone else. He also makes it known that his yogic postures and other spirit-based body movements have “out-spiritualized” the rest. Of course, this is the opposite of what meditation and purportedly holistic belief systems are meant to about. Indeed, it’s the surrender of the ego that is often held up as the ideal. Manifesting this type of guy on stage is the charismatic Eric Sharp in a wonderfully uncanny portrayal that shrewdly cuts through the tranquility with the body language and emanation of ego. Sharp shows us how vividly expressive an actor’s physical instrument, i.e. his physical body, can truly be.

Jay Owen Eisenberg brings rich vocal expression to the role of the unseen facilitator, giving the character’s voice a demagogic edge. One cannot help but think of corrupt gurus such as Osho, once known as Rajneesh, and Kool Aid-dispensing proselytizers like Jim Jones of Jonestown infamy. Though Wohl doesn’t go in this direction, Eisenberg’s approach serves as a valid reminder of what might go and has gone awry in such situations. Eisenberg adds texture to the overall effect, adding dimension to Wohl’s perceptive writing.

Jim Lichtscheidl, Becca Hart, and Michael Curran-Dorsano round out the ensemble in touching performances that remind us of how loss and change can wreak havoc on our emotions, throwing life into a tailspin. In so many cases, the heart and the mind can tend toward fragility, so it is crucial that society provides support in some way. Curran-Dorsano’s delivery of the only dramatic speech given by the participant characters is very moving, revealing anguish particular to the time we live in. Every single actor seen on stage is simply exquisite in their ability to convey so much complex emotion with practically no words whatsoever.