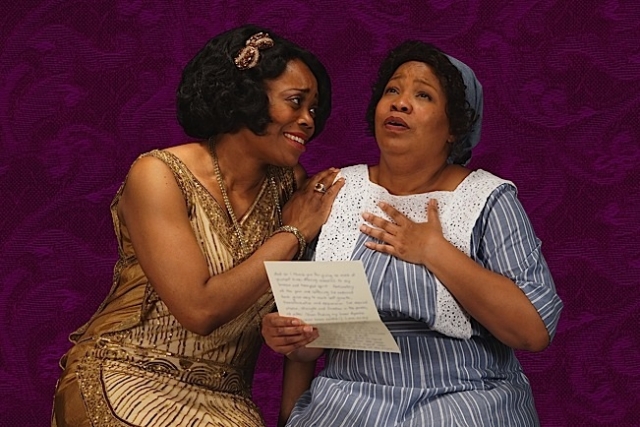 You probably recall what a phenomenon Alice Walker’s The Color Purple was in novel and film form in the 1980s. But it was adapted into a Tony-nominated stage musical in 2004. Catching the area premiere on Park Square’s main stage is a wonderful way to celebrate Black History Month and remember the epic story of Celie. The saga of an African-American woman essentially indentured into a marriage after the loss of her two babies has been staged briskly, sweetly, and passionately by director/choreographer Lewis E. Whitlock III. The dance numbers are simply dreamy.

Park Square’s production not only reads like a Who’s Who of top local actors of color but it also presents them in some of their strongest and most interesting work ever. Aimee K. Bryant brings depth and long-suffering goodness to Celie and shows us once again that she is one of the most lovable actresses around. As you can imagine, Regina Marie Williams as glamorous nightclub singer, Shug Avery, was born for the part. These two powerhouse women play the scenes where there is clear physical and emotional attraction between the two characters with truth, sensitivity, and pride. It’s right there, plain, up front, and wonderful. 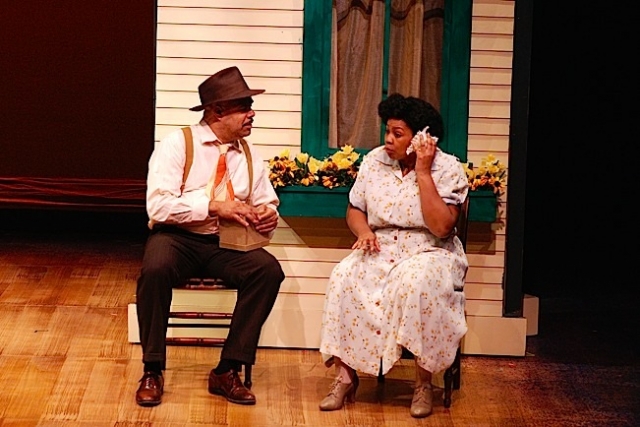 T. Mychael Rambo is generally known for his warm-hearted, congenial characterizations but as the abusive “Mister” he reveals a brutal dimension I have never seen in the 20 years I’ve seen him act. A truly transformative performance. Dennis Spears, another actor known for his vibrant and likable portrayals, delves into the bitter nastiness of Mister’s judgemental father. He sets just the right tone and we understand how and why his son turned out to be so cruel.

Darius Dotch has played little devils who steal away hearts of women and men in three of the greatest productions of the past few years –Stick Fly, Marcus; or the Secret of Sweet, and Colossal. However, in a totally opposite turn as humble Harpo he is totally endearing. Dotch and a feisty Thomasina Petrus as wife, Sofia, fire up a crackling stage relationship. In sum, the performances in The Color Purple are out of sight!