Steve Nardini joined the Hump Day Bowling League nine years ago as a way to meet others in the GLBT community and was hooked after the first year. Actually, his partner was usually busy on Wednesdays, so he started looking for something that would be fun and not just hanging out at a bar. He looked up bowling as something he’s always done (though doesn’t claim to be any good at) and had fun doing. To his surprise, he found a GLBT bowling league and talked a couple of friends into joining with him and voila! He had a team!

His second year, he was hooked and got more involved as the league’s secretary and spent the next few years building up the league with the motto, “The more, the merrier.” The league has stood at 22 teams for the last few years.

He says, “I’m very proud to bring new people into our league, reaching out to the community, along with anyone that wants to bowl.”

The league has a GLBT majority, and split just about down the middle with male- and female-identified players. This year, the league welcomes their first transgender bowler, and the league has always welcomed those from the straight community. According to Nardini, the league isn’t defined by sexuality, but instead invites everyone that likes to bowl and have a good time while having a friendly competition.

“I do believe having outlets in the community, other than places like bars, play an important role,” Nardini says. “It gives a chance to meet others with similar ideas. It also gives us an opportunity to help those in need.”

This past year, the league held a tournament that raised $400 for Little Brothers – Friends of the Elderly and their outreach program. Similar tournaments over the past four years have raised over $5000 for organizations. “Our league is a family. We look forward to bowling each week. We look forward to seeing our friends each week. We cheer each others good throws and scores. And although our league is over for the season, I know everyone looks forward to the next.” 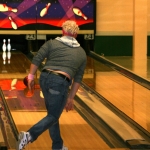 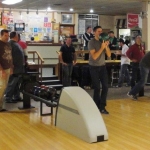