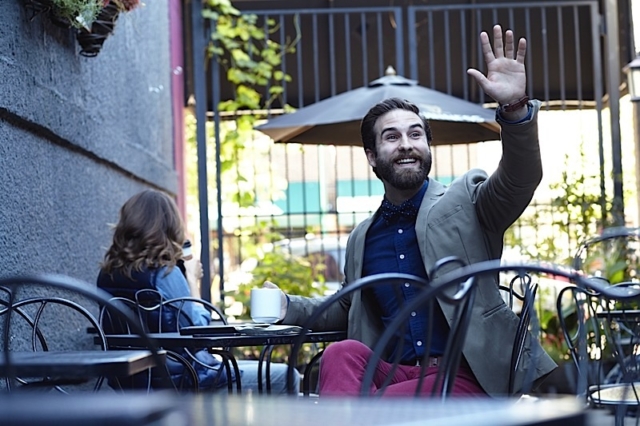 Michael Wieser as Zachary. Photo courtesy of the Jungle Theater.

Three generations of gay men approaching life after the legalization of same-sex marriage are ingeniously evoked in Philip Dawkins’s recent comedy, Le Switch. This gay groundbreaker has been brought to life in a vibrant production at the Jungle Theater. Kasey Mahaffy is protagonist David, a gay man who had come of age not really expecting that gay marriage would ever be legal. He seems to have fortified his mind with intellectual justifications that marriage is a long outmoded institution that doesn’t even work for heterosexuals. The audience will weigh out to what degree his view is legitimate or a defense mechanism.

However, when thirtysomething David takes a trip from his native New York to Montreal his conclusions are thrown into inner chaos when he meets a handsome young florist in his 20s named Benoit (Michael Hanna). They fall in love quickly, but David’s anti-marriage rationalizations thwart the two from truly bonding, though it is clear that is what the universe means for them to hitch up. Le Switch rides David’s emotional roller coaster as he overthinks his oh-so-very-principled case against the marriage institution, while the dreamy, yet sturdy, Benoit is chomping at the bit to marry him. The obstructive behavior makes for suspense and witty comedy.

Mahaffy delights in a manner reminiscent of a gay version of Woody Allen. Hanna brings sensitivity and irresistible sweetness to Benoit. Jeremy Cohen has joyously directed Le Switch with heart and humor with uncanny consciousness of the years 2011 to 2014 when same-sex marriage was legalized in New York and then onto being validated by the Supreme Court. A poignant Patrick Bailey represents an older generation that lives with the understanding that so many of its own generation are now deceased. Michael Wieser and Emily Gunyou-Halaas add marvelous support. Barry Browning’s lighting is simply enchanting.