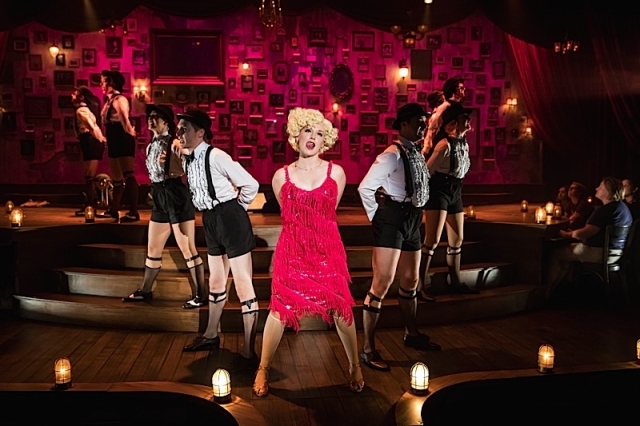 Corruption and decadence rule the ramparts in Chicago, the vaudevillean-style Roaring 20s musical, now in a savagely sharp-edged revival by Theater Latte Da at the Ritz Theater. The subject: homicidal women capitalizing on their crime by pursuing fame and fortune from their jail cells. Their twisted ambitions are treated with the sordid irony warranted by director Peter Rothstein. That sordidness is seductively stylized into the lyrics by Fred Ebb, music by John Kander, and book by Bob Fosse and Ebb based on Maureen Dallas Watkins’s 1927 play. David Thompson adapted the script to the musical as well. 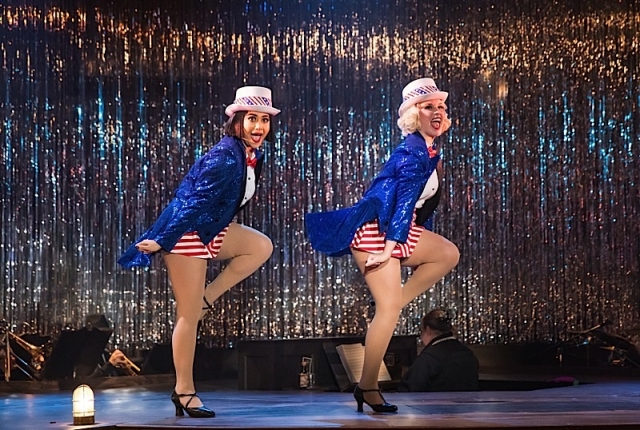 The angular and elongated dance style originated in the 1975 premiere choreographed by Fosse inspires Latte Da choreographer Kelli Foster Warder. The cast manifests the Fosse style aptly with a dancer standout in Michelle de Joya as the murderous Velma Kelly. In turn, costume designer Alice Frederickson enhances the bodies with a period look mixed with irreverent genderbending for the cop character clusters that recur throughout. Paul Bigot’s wigs and hair resonate to the Fosse spirit nicely too. However, Eli Sherlock’s set is a bit puzzling because it’s comprised of a whole upstage wall of small pictures with indiscernible content in the eyes of most audience members.
Chicago has it’s own version of the shadow state in two enterprising exploiters. Lawyer Billy Flynn (Robert O. Berdahl) and jailkeeper Matron “Mama” Morton (Regina Marie Williams), both of whom extort sums from the accused as they await trial. Both actors are brilliant in the roles—exponents of the smooth cynical callousness that essentially runs Chicago law enforcement’s infrastructure. 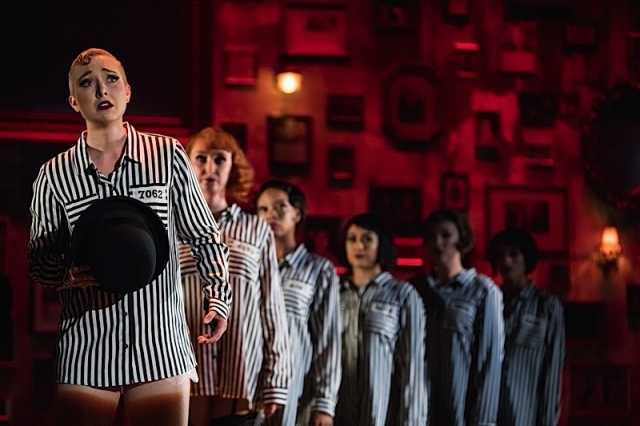 Of course, “it takes two to tango” and the “Merry Murderesses” have devolved into the maze of mutual exploitation. They’re all in with their narcissistic thirst for fame even if, in one case, it means lying about pregnancy. They dance in mutual exploitation with the big time profiteers like Flynn and the small potatoes like Matron “Mama”. 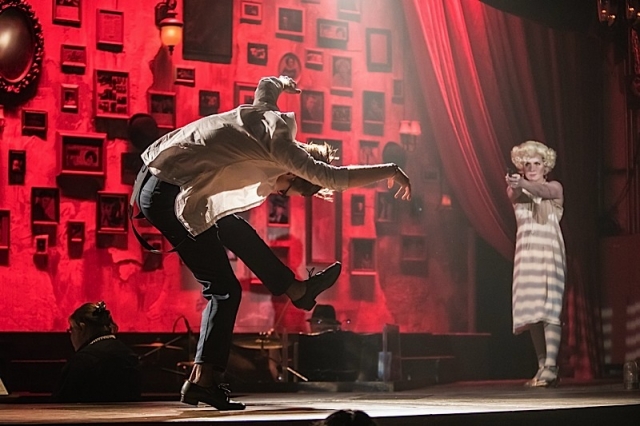 The musical’s central couple—the murderous and adulterous Roxie Hart and her gullible auto mechanic husband, Amos—anchor the tragicomic heart of Chicago. Britta Ollmann brings sociopathic vigor to the petulant Roxie. Needless to say, she shows no remorse. Reed Sigmund’s Amos is a moving portrayal. He signifies the hapless common man mowed down by a society run by a comparatively few powerful men, with a personal/financial life destroyed by a corrupt woman eating at the trough of ill-gotten patriarchal spoils. Amos’s plight culminates in a heartwrenching rendition of “Mister Cellophane”. Some feel it’s Chicago’s best tune with a message of a dehumanizing problem: being out of the loop that the rest of society seems to be harnessed to. A collaterally damaged victim of decadence, Amos epitomizes the invisible common man in a world where nice guys are fated to finish last. 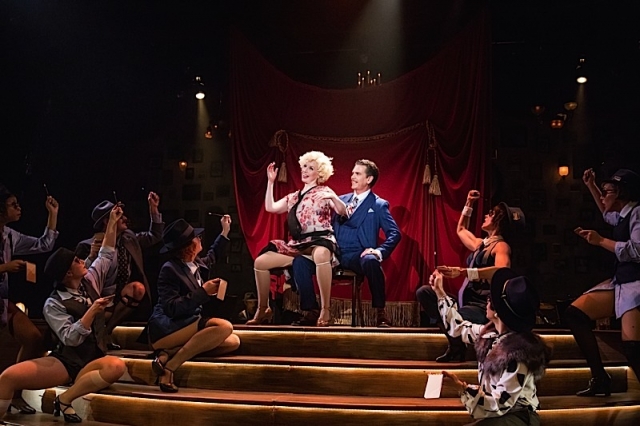 Fernando Collado’s crossgender turn as Mary Sunshine, a goody-two-shoes news reporter, is another counterpoint. Fittingly played with exceeding earnestness, Collado’s Sunshine tsks-tsks on the casualties of a city run by corruption. As is typical of her type, the altruistic reporter is incapable of comprehending the dark depths of the shadow state. Sunshine may seem odd in her naivete, but in terms of the era, it’s not far fetched. It’s extraordinary to audiences today that people could actually be that naïve. But many indeed were. Yet on the other hand, we still see this style of journalism.
In overview, the cynical and sardonic spirit of Chicago is penetrated most satisfyingly in Latte Da’s production by Berdahl and Williams in devastating contrast with Sigmund. These three, as they say, “really get it”. They truly fathom that spirit. 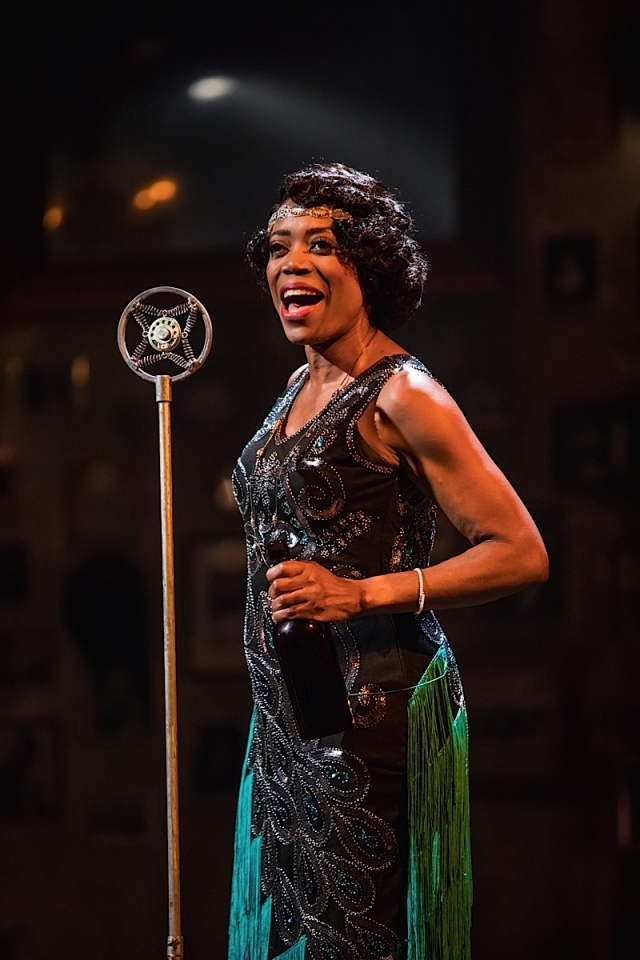 The great Denise Prosek, as usual, delivers spot on musical direction with what qualifies as a genuinely sardonic score. Her terrific musicians and the cast vocals all embody the devil-may-care Jazz Age dimension with crackling vibrancy. Fiddling while Rome burns, so to speak.
Chicago
Through Nov. 3
Ritz Theatre, 345 Thirteenth Ave. NE, Minneapolis
612-339-3003
latteda.org