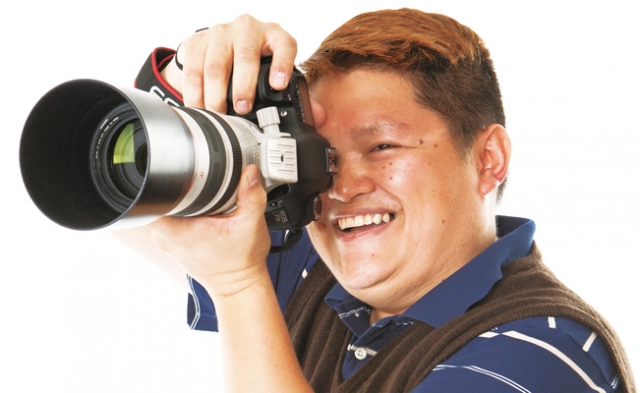 I sit at my computer trying to reconcile the news from Andy (Lavender’s Managing Editor): A seemingly perfectly healthy, vivacious man I met just a couple of weeks had a stroke. It didn’t seem possible. He is young, somewhere in the vicinity of 40, active, bright, enthusiastic, and full of life. How ironic is it that a guy I interviewed recently about his involvement in sports is facing physical impairment?  I guess it’s an example of how life is full of curve balls. And then on further reflection I realize how it’s an even greater example of what an inspiration Larry is…

When Larry Barthel tells me he used to be a mushroom, I tilt my head and give him a quizzical look. He laughs and explains, “That’s someone who spends a lot of time in a dark, damp basement playing video games.” Oh, okay.

The man with a sunny personality sitting across from me at Espresso Royale in Dinkytown certainly doesn’t look like a fungus. With olive skin and an infectious smile, Larry tells me how getting involved in the gay sports scene in Minneapolis has really helped him blossom, make friends, get involved in community events, and reunite with an old hobby—photography.

A few years ago, a friend convinced him to come along to a volleyball game. When the friend bowed out, Larry stepped up to the net, said “Screw it, I’m just going to go play,” and ended up joining the Gay Lesbian Amateur Sports Society. Among his teammates, he found acceptance and what he calls a “safe space.” “I think the gay sports give us a good environment to be whoever you are and be comfortable without worrying about being harassed.”

Another appeal of joining a gay volleyball team is jumping over the coming out process. He says, “They could not bring their whole self to the team until they came out.  But when you get on a gay team, you don’t have to come out. We already assume you are gay.” For Larry, the gay sports scene also offers a nice alternative to the gay bar scene. “It kind of hard to meet people through other activities. You can meet people through the bars, but that’s the only association you have is going out drinking and dancing whereas, in the sports scene, you’ve got the games that you play, the practices, fundraisers for your team—all these things that are going on and they really do help you meet people who have a similar interest.”

And that’s just what happened for Larry when, during the Red Ribbon Ride in 2008, he made friends who shared his passion of photography and ended up teaching him some skills behind shooting. Inspiration struck when he found himself with free time off the court during volleyball games, and he began snapping action shots of the other players. Soon friends convinced him to start shooting North American Gay Athletics Association softball games. He explains why he loves to capture the action. “I realized people usually don’t know how good they look when they are playing sports. You see someone on a bike, and they just have that perfect form, and they are just gliding by and they look absolutely cool. I love capturing the moment and saying this is what you looked like when I saw you looking gorgeous going by.”

It clicks for me then that Larry is now helping give others the same type of confidence he has gained from playing sports. “So you’ve gone from mushroom to…dandelion?” I ask in a feeble attempt to make a clever analogy. “No,” he says shaking his head and grinning. “Dandelions are weeds…how about…sunflower?” Right. From mushroom to sunflower.

And that’s where my article on Larry originally ended. When I heard from Andy about his stroke during this year’s Red Ribbon Ride, I was shocked and reached out to him—first, of course, to tell him I hoped he was okay, and then to ask (ever the reporter) if he wanted to share his story.  Larry responded to Andy and me and shared a candid account of what happened.

“On Saturday, July 21, while taking pictures and video for the Red Ribbon Ride near Northfield, MN, I suffered a severe stroke on the left side of my body. Due to a narrowed artery in my brain, a small blood clot from an untraced source got stuck and destroyed the part of my brain that manages the sensations on the left side of my body. That entire side of my body went immediately numb and at the same time hypersensitive, similar to how your face feels just after the anesthetic starts wearing off after a visit to the dentist. Fortunately, the stroke did not touch my mental faculties or my broad motor control—I am able to walk (though slowly) and am able to speak and think clearly. At the time of the stroke, I was sitting on the side of the road and taking photographs, so at least the timing did not put me into immediate peril. I flagged down one of the support vehicles for the Red Ribbon Ride and was taken the hospital, where I spent 10 days recovering and relearning some basic skills such as walking and typing. Thanks to everyone’s help, I am once again able to type fairly normally.”

Well, for anyone that knows Larry you probably won’t be surprised that he didn’t stop at typing up an update on his condition. He took the time and effort to write about the Gay Softball World Series, coming to Minneapolis this month.

“Though I am not the official photographer for the GSWS in the Twin Cities this summer, I will be volunteering and participating in the festivities, including the Opening Ceremonies, the Hall of Fame Dinner, and the Closing Ceremonies (which will feature a slideshow video I will author of photos from the week). GSWS is such a tremendous opportunity for the local softball community that there is no way I couldn’t participate in it somehow. Thousands of athletes from around the nation will be here to compete—how could I not stick around and point a camera or two at it? I think it’s great that LGBTA folks from all over the nation can get together for friendly competition. Many people who meet through these sporting events become lifelong friends, forging alliances that cross geographic and cultural boundaries. It’s a great way to stay active, meet new people, and engage in friendly competition, all in a LGBTA-safe environment.”

As I read Larry’s words, I realize I can’t rewrite them any better. But, I do hope I can put into words a sentiment I know is felt by many: Thank you, Larry, for sharing your story. We wish you a full recovery, and we can’t wait to see you out shooting again and flashing that megawatt “sunflower” smile.