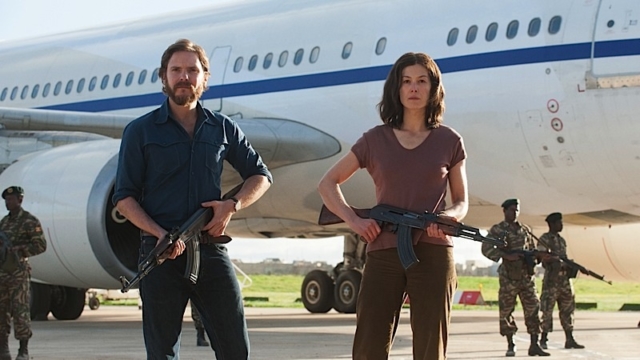 The screenwriter for 7 Days in Entebbe, Gregory Burke, has crafted the language of its two central characters, both terrorists, with an uncanny sense of ideological indoctrination. One really gets the unsettling sense that the characters speak as the real-life characters they represent might actually have spoken.

Daniel Bruhl and Rosalind Pike play Wilfrid Bose and Brigitte Kuhlmann, of the West German terrorist organization Revolutionary Cells. In league with The Popular Front for the Liberation of Palestine, they hijacked an Air France passenger jet headed to Tel Aviv in 1976 and ended up in Entebbe, Uganda. This African country was sympathetic to the hijackers, whose double standard overlooked the fact that one of 20th century’s most sadistic dictators, Idi Amin, ruled over the harshly subjugated inhabitants with depraved policies and arbitrariness.

7 Days in Entebbe is an edge-of-the-seater as the hijackers manically rein in the passengers and crew under what seems like a semi-improvised effort. Its as if their faulty sense of detail is made up for by their audacity.

What comes through the terror team’s intense communication is engrained antisemitism mixed with Bolshevik-style interpretations of oppressors and the oppressed. We get the idea they regard Israel as an accomplice to monolithic greedy financial interests. They’re that absolutist, but then they’re terrorists.

The monumental irony is that many Israeli Jews are on board. They’re certainly not the stereotype of the heartless Jewish banker cabal promoted across political extremes in that era from Stokely Carmichael to Willis Allison Carto. They were ordinary folks who simply want a place to live peacefully. Children were on board as well. However, worst of all is that some were prisoners in Nazi concentration camps a generation earlier. The hijacking is definitely a dark memory trigger.

Bruhl plays Bose as the penitent German liberal who seriously fancies himself as the virtuous do-gooder, bravely standing tall for the oppressed as a way of compensating for his nation’s diabolical recent past. Bruhl’s is an eerily relevant caution against the way do-gooders have been known to reap horrific results from what they were so certain were good and pure intentions.

It’s not until he is holding the passengers hostage under the control of the atrocious Idi Amin (a chilling Nonso Anozie) that it dawns on him that he has targeted, terrorized, and brought the probability of a horrible death upon several innocent Jews. Bose sees into the abyss—a dreadfully luminous moment of truth.

However, it is Pike as Kuhlmann who gives 7 Days in Entebbe a performance that lifts the film to greatness. If you’ve ever seen the Oscar-winning box office blockbuster Doctor Zhivago you may well recall Tom Courtenay’s jolting Oscar-nominated turn as a brutal revolutionary. Pike’s visceral turn as a similar character is utterly shocking as she reveals the death-dealing lengths she will sanction. Hers rates right up there with Courtenay’s as one of cinema’s most spellbinding renditions of political fanaticism. It’s a performance people need to see, especially at this time.

Pike is one of her generation’s great actresses. This ruthlessly uncompromising portrayal is the embodiment of vindictively focused cruelty in the name of a cause. Not to mention a grim view of how bitterness eats the soul.

Weaving throughout 7 Days in Entebbe are forceful ensemble dance segments choreographed by Ohad Naharin that obliquely comment on the terrorist actions and counterterrorist response that comprise the basic dynamic of the story. The effect is ultimately sublime.

Director Jose Padilha has masterfully balanced 7 Days in Entebbe with exhilarating action and richly nuanced performances. Lior Ashkenazi, heartthrob of Eytan Fox’s iconic gay-themed film Walk on Water, is older now and brings splendid gravitas to the role of Israeli Prime Minister Yitzhak Rabin. He is contrasted vividly in temperament and philosophy by an intriguingly understated Eddie Larsen as Defense Minister Shimon Peres. Denis Menochet gives a moving performance as the co-pilot who counters the hijackers emotionally and philosophically.