Chic Laguna Beach, the jewel of the so-called California Riviera, has long been a favorite gay vacation spot. About midway between San Diego and Los Angeles and nicknamed SoHo-by-the-Sea, the area began attracting artists around the turn of the 20th century. A formal art colony was established in 1917, and since then this charming little community has retained its intimate scale and artsy vibe while developing an increasingly impressive crop of plush seaside hotels and superb restaurants. 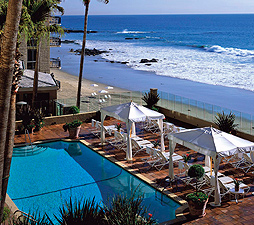 In addition to painters and writers, Hollywood film stars—Douglas Fairbanks, Mary Pickford, Bette Davis, and Mickey Rooney–were an early presence in Laguna Beach. The early culturati helped establish what is still one of the nation’s outstanding community theaters, the Laguna Playhouse. The Festival of the Arts, a still-thriving showcase for local painters, sculptors, and other artists that began in 1932, sealed the town’s reputation as a cradle of West Coast creativity.

The GLBT presence was very discreet during most of the 20th century, and there has been occasional tension between some of the town’s mainstream and gay business owners and even residents over the years. Laguna is, after all, a coastal arm of conservative Orange County. Nevertheless, by 1983 there were enough progressive residents to elect Robert Gentry the first openly gay mayor in the United States. Laguna later became the first town in Orange County to adopt an antidiscrimination policy that protected the rights of gays and lesbians.

Laguna today is a desirable getaway for couples seeking romance, and with California having legalized gay marriage in 2008, it’s quickly become a favorite locale for same-sex weddings and honeymoons. The ocean views and sandy beaches are spectacular, there’s noteworthy shopping and dining, and there’s one lively little gay bar—just enough nightlife to keep yourself occupied in the evening until another gorgeous day begins.

A good spot to begin your explorations is in the village center of Laguna, at the oceanside equivalent of a traditional American town green: Main Beach. This breezy park has tile benches, a large expanse of golden sand, heavily-used volleyball nets and basketball courts, and a small wooden boardwalk. Locals and tourists laze in the sun, their peace interrupted only by the occasional ring of a cell phone. Along Ocean and Forest avenues, and along Broadway, are excellent cafés and some fine art galleries and boutiques. North of Main Beach is Laguna’s Gallery Row, the most concentrated stretch of art dealing in town, as well as the Laguna Art Museum, which houses a small permanent collection of works by local artists and mounts outstanding temporary exhibits.

A five-minute drive south of downtown, Coast Highway leads to some gay-popular businesses and hangouts, most of them along the blocks between Oak and Calliope streets. The long-famous gay resort, the Coast Inn, closed in 2007, but there are rumors afoot that a new gay-friendly resort will take its place. The beach behind the former inn still has a somewhat gay following, however.

For an enchanting side trip, head south of Laguna Beach several miles to reach San Juan Capistrano, the one town in the area that retains a sense of California’s Mission-era history. Many of the adobe structures here date from the late 18th century. Mission San Juan Capistrano is famous as the spring host to thousands of migrating swallows from Argentina, and its Serra Chapel is thought to be the oldest continuously used building in the state of California. A small downtown area has largely escaped 20th-century commercialism.
Laguna’s glamorous and artsy aura continues in the decor, presentation, and quality of its restaurants. There’s a budding café culture downtown, and eating establishments line the Coast Highway, both to the north and south. One of the finest restaurants and most romantic settings along the Southern California coast, the Splashes Restaurant at the Surf and Sand Resort captivates diners with its sleek dining room directly fronting the ocean. Service is deft and knowing, and the creative regional American fare is out of this world. Consider starting with Maine lobster salad with roasted beets and orange-star-anise dressing, before sampling fennel-pollen-crusted ahi with a fava purée, olive oil, artichoke confit, and tarragon sauce.

Although it’s a tad touristy, the Cottage has been a friend to gays and lesbians since it opened in the early 1970s. The straightforward Continental cuisine is competently prepared–fire-roasted Colorado rack of lamb with a whole-grain-mustard sauce is a favorite. For breakfast, try the Laguna omelet with bay shrimp, snow crab, fresh dill, and Swiss cheese. Another of the more gay-popular venues in town, Nick’s serves nicely prepared traditional American chow and has a lovely outdoor patio that’s perfect for relaxing on a sunny day.

Zinc Café and Market is the ultimate lunch and breakfast spot downtown, with outstanding, healthy salads, sandwiches, and gourmet goodies, and a sunny outdoor dining area aglow with greenery and set with zinc tables. The self-serve fast-food restaurant Taco Loco is more than just a favorite surfer hangout—it serves fish fajitas and tacos to die for, available in many varieties: octopus, shrimp, mahimahi, and so on. Plenty of folks rave about the blackened-mushroom-tofu burgers, too. Get your java fix at Koffee Klatch, a cheerful storefront coffeehouse in the gay neighborhood, with tantalizing desserts, sandwiches, and Wi-Fi.

With the Coast Inn and its Boom Boom Room nightclub club having closed, Laguna Beach is not a major destination for gay nightlife. Bounce is the town’s only gay bar—it’s a cozy basement lounge with comfy seating, and it’s close to Koffee Klatch and several other gay-friendly businesses along South Coast Highway. There’s popular cabaret and karaoke some nights, and the bar draws both women and men of all ages. If you’re looking for a bit more clubbing action, you can always drive up to Long Beach (40 minutes north), which has a nice selection of lively gay bars.

Laguna’s Coast Highway is strung with generally mainstream but gay-friendly lodgings, from posh hotels that face the ocean to a few basic motels. In the absence of a true gay resort in Laguna Beach, a number of properties nevertheless have a strong gay following. At the luxury end, the swank Surf and Sand Resort sits right on the beach, each of its 152 spacious rooms and suites offering panoramic ocean views. The tastefully appointed units have muted, contemporary furnishings and color schemes. The resort also has a top-notch spa, Aqua Terra, and there’s a beautiful patio overlooking the sea that’s perfect for weddings–the resort is very amenable to same-sex ceremonies.

An enchanting Spanish Mission-style compound, gay-owned Casa Laguna Inn draws a mainstream clientele but also has a strong GLBT following. The property has lush gardens and courtyards strewn with bougainvillea and queen palm trees, a pool and sundeck shaded by banana and avocado trees, and a small but exceptional spa. The wide-ranging accommodations (which are pet-friendly) include a small romantic cottage with phenomenal views, and about 20 additional units ranging from sprawling ocean-view suites to moderately priced courtyard rooms. Nearby, Laguna Brisas Spa Hotel is a cheerful property with a good reputation in the gay and lesbian community. Rooms are done in cool pastels; they’re big, comfortable, and have ocean views–and all have two-person whirlpool tubs. The setting is a dramatic hill, with rooms tumbling down the side.

It’s not quite as laidback as your typical beachfront hotel, but the formality of the magnificent Ritz-Carlton Laguna Niguel is worth braving if only to behold the breathtaking views from its stunning waterfront setting. Rooms are spacious and outfitted with top-notch amenities, including glamorous marble baths, goose-down pillows, terry robes. Even if you don’t stay here, consider dropping by for a treatment in the magnificent spa, snacking in ENO wine-and-chocolate-tasting bar, or enjoying dinner in the ultra-posh Restaurant 162, named for its spectacular location on a bluff 162 feet above the ocean.