Kidman & Kusama Break the Mold with the Nobly Uncompromising “Destroyer”

Southern California is no sunny paradise in Destroyer. Director Karyn Kusama (Girlfight), embodying the same general concern as filmmaker Lucas Hedges with another recent film gem, Ben is Back, makes no bones about it: the underground illegal drug trade has become a menace to American security and the nation’s well being. But perhaps most threatened of all is the individual soul.

In Destroyer, Nicole Kidman (Eyes Wide Shut, The Hours), plays protagonist detective Erin Bell, an LAPD veteran, whose drinking has wreaked havoc on her self and on those she loves. When she shows up unbidden at a crime scene where a man with distinct tattoos on the back of his neck lies dead, fellow cops tell her to get lost and dry out. But when she recognizes who the dead man is, she’s triggered into purpose. Like ancient myth, Fate innately compels Erin to wake up to herself and make amends for her serious character flaws. Her mission to accomplish that is to ultimately root out a criminal named Silas (a smoothly psychotic Toby Kebbell).

If you’ve heard about Kidman transforming away from her naturally elegant physical beauty into a gritty, if not grotesque shell of a woman in Destroyer, you’ve heard accurately. But it’s not merely a clever manipulation of makeup and her looks. (Though that technical aspect of the performance is terrific.) The outward haggard quality is a reflection of the inner soul gone toxic.

Erin’s quest for closure is reminiscent of fabled westerns where the loner male protagonist is driven to rectify a cardinal wrong with a whisper nagging at his conscience that echoes “this is now what is to be done. Go forth.” Such grim determination is contrasted vividly with flashback scenes periodically interjected of Erin’s life pre-deterioration as an undercover FBI agent. The actress’s youthfulness is as convincing as her shabbiness in her older scenes. The effect is tragic.

Destroyer’s storyline is set up when the younger Erin and her husband, Chris (Sebastian Stan) take risks few couples are ever called upon to make. As FBI undercover agents, they infilitrate a diverse drug gang network. It goes without saying that such a network is violent. Theirs is a risk for which the rest of us owe thanks but for which the agents imperil their lives, their health, and even their sanity. Kusama is brutally frank in depicting that peril and the loving chemistry between Stan and Kidman is poignant in its contrast to the demonic spirits in the flesh they’ve been tasked to flush out.

Kidman also has some marvelously confrontational scenes. However, in one particular scene where she confronts a mansion-dwelling thug played with astounding smugness by Bradley Whitford, I dare anyone in the audience not to shout out “you go girl!” It exemplifies the degree to which criminal elements have reached a level of prosperity, therefore clout, in our society. The reason for this is because too often, the rule of law and order no longer hold sway. There’s a moment when Erin calls out like a wounded animal for “accountability”. She’s referring to herself as much as she is to the hoodlums around her. In this sense, Destroyer profoundly departs from feminist orthodoxy. Kusama and Kidman, like Harry Truman, are telling both women and men across the spectrums: “The Buck Stops Here”. We are all accountable for our actions, no matter who we are or what identity we can be categorized by.

Perhaps no other aspect of Destroyer wrestles with this dilemma of integrity as does the explosive relationship between Erin and her teenaged daughter, Shelby (a crackling Jade Pettyjohn). The hurtful way these two female characters talk past each other is heartwrenching. As their relationship recurs throughout, it points to the mastery of how screenwriters Phil Hay and Matt Manfredi balance action with interior insight.  Erin’s experience is for the rest of us, a kind of briefing for a descent into hell if we don’t get a grip on the drug and opioid crisis. 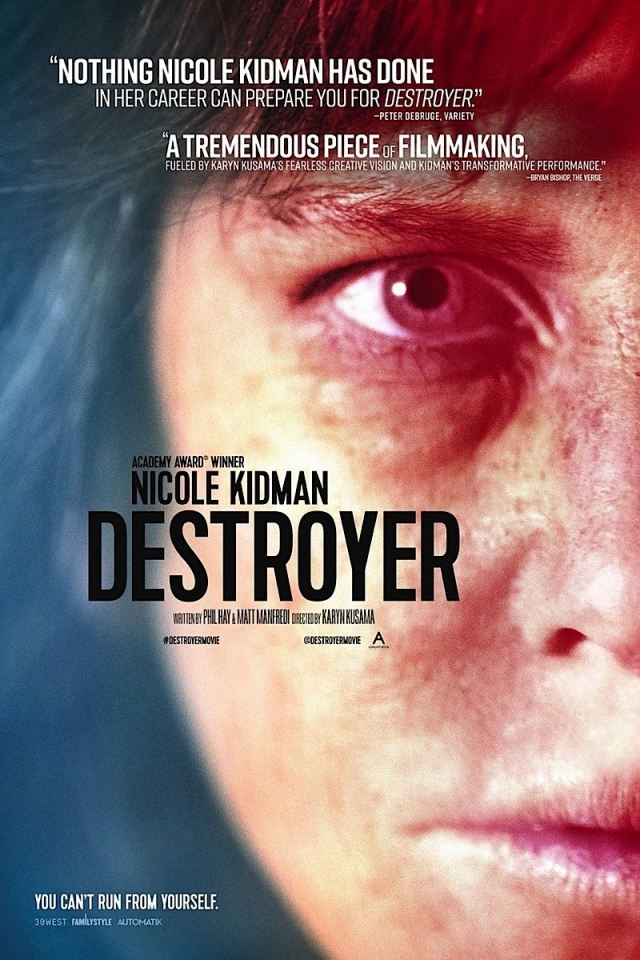